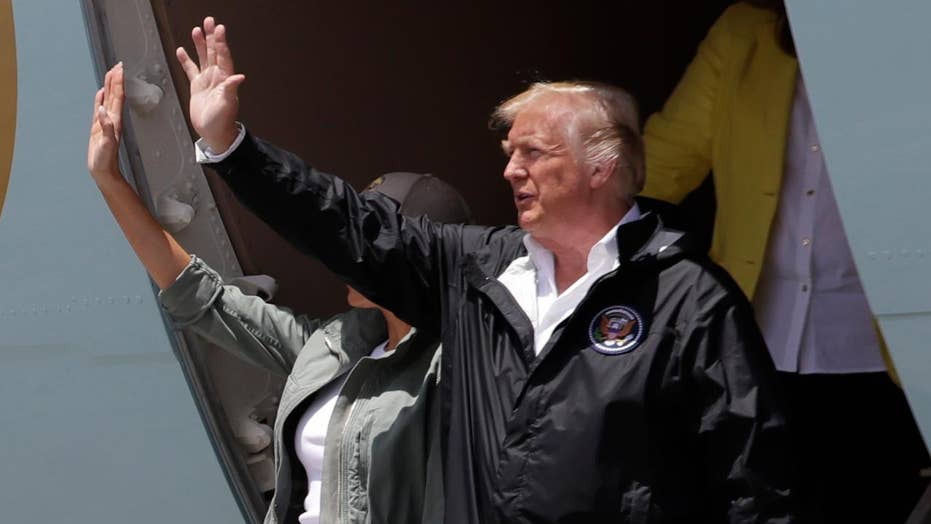 President Trump visited storm-ravaged Puerto Rico on Tuesday to survey damage and talk to residents, while also meeting and briefly praising the San Juan mayor following their feud over the administration's response to Hurricane Maria.

The president, accompanied by first lady Melania Trump, participated in a packed briefing on storm recovery shortly after landing at Luis Muñiz Air National Guard Base in San Juan.

San Juan Mayor Carmen Yulin Cruz, who has repeatedly criticized the president’s actions since the storm wreaked havoc on the U.S. territory last month, was seen shaking Trump's hand and joining him for the briefing in a hangar.

Trump didn’t mention Cruz in his remarks to the media. But – in comments that seemed meant to draw a contrast – the president singled out Ricardo Rosselló, the governor of Puerto Rico, for praise.

“This governor did not play politics,” Trump said. “He didn’t play it all. He was saying it like it was. And he was giving us the highest grades.”

While in Puerto Rico, Trump viewed the damage from a helicopter, participated in several briefings with officials, met storm victims and toured the USS Kearsarge. He also met with senior military personnel and government officials, including Rosselló and Kenneth Mapp, the governor of the U.S. Virgin Islands, which was also severely damaged by the storm.

“Now, I hate to tell you Puerto Rico, but you’ve thrown our budget a little bit out of whack,” the president said at the hangar briefing. “Because we’ve spent a lot of money on Puerto Rico. And that’s fine, we’ve saved a lot of lives.”

The president pointed out that 16 people died in Puerto Rico because of Maria -- a death count far lower than that of “a real catastrophe like Katrina” in 2005.

“Sixteen people versus in the thousands,” Trump said. “You can be very proud of all your people.”

Trump's visit comes just days after getting into a high-profile spat with the San Juan mayor.

Cruz had begged the administration to "make sure somebody is in charge that is up to the task of saving lives."

Trump responded angrily on Twitter, deriding the "poor leadership ability by the Mayor of San Juan, and others in Puerto Rico, who are not able to get their workers to help."

Trump downplayed the spat with the mayor when asked about it by reporters as he departed the White House on Tuesday.

“Well, I think she’s come back a long way,” Trump said. “I think it’s now acknowledged what a great job we’ve done, and people are looking at that. And in Texas and in Florida, we get an A+. And I’ll tell you what, I think we’ve done just as good in Puerto Rico, and it’s actually a much tougher situation.”

But Trump added: “On a local level, they have to give us more help.”

After his hangar briefing, Trump walked from home to home through a neighborhood in Guaynabo, where piles of debris and downed trees were visible. Accompanied by Puerto Rico’s governor, Trump greeted residents and took photos with them outside their homes.

Maria was the most powerful hurricane to hit the island in nearly a century and unleashed floods and mudslides that knocked out the island's entire electrical grid and telecommunications, along with many roads.

Nearly two weeks after the Puerto Rico storm, 95 percent of electricity customers remain without power, including some hospitals. And much of the countryside is still struggling to access such basic necessities as food, fresh water and cash.

Trump and other administration officials have worked in recent days to reassure Americans that recovery efforts are going well and combat a perception that the president failed to fully grasp the magnitude of the storm's destruction in its immediate aftermath.

While early response efforts were hampered by logistical challenges, officials say that conditions, especially in the capital, have improved.

According to the Federal Emergency Management Agency, there are now more than 10,000 federal officials on the ground on the island, and 45 percent of customers now have access to drinking water. Businesses are also beginning to re-open, with 60 percent of retail gas stations now up and running.

Marine Corps Gen. Joseph Dunford, chairman of the Joint Chiefs of Staff, told the Senate Armed Services Committee during a hearing on Tuesday that the United States military has 10,000 troops on the ground in Puerto Rico.

Fox News'  Lucas Tomlinson and The Associated Press contributed to this report.