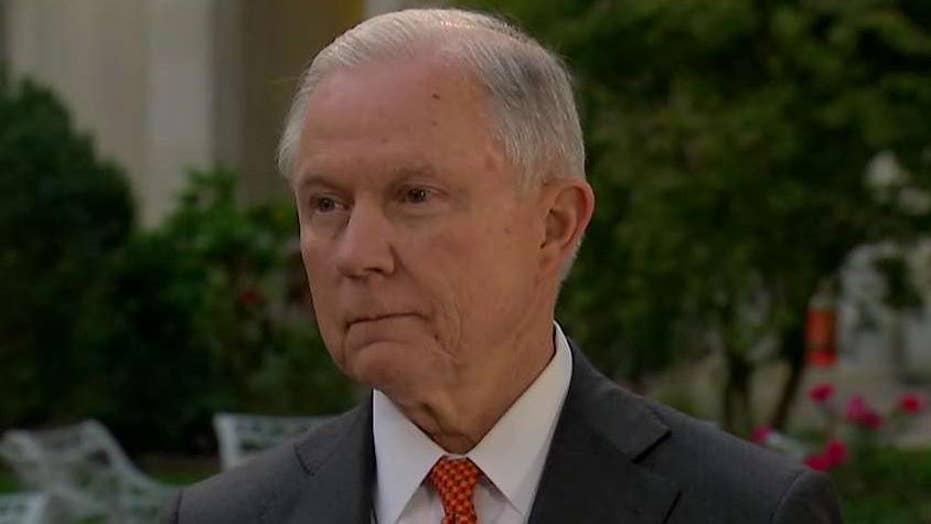 The attorney general shares his thoughts on 'Special Report.'

President Trump made it clear on Friday that he’s not happy with the Justice Department and hinted that Attorney General Jeff Sessions could be out of a job if he didn’t start investigating Democrats.

“Honestly, they should be looking at the Democrats,” Trump told reporters minutes before heading out on a 13-day trip to Asia.

The president’s comments followed a morning tweetstorm in which he repeatedly criticized political rival Hillary Clinton and the Democratic National Committee.

Asked if he would fire Sessions if the DOJ doesn’t free up agents to investigate the DNC, Trump responded “I don’t know.”

“A lot of people are disappointed in the Justice Department, including me,” he added.

The White House has repeatedly sought to turn the attention of the probe, which is looking into potential collusion between the Trump campaign and the Russian government, to Clinton and her campaign.

Earlier Friday, Trump said the American public "deserves" a federal investigation of Clinton and the DNC over a joint fundraising agreement they signed in August 2015.

Trump's accusations follow publication by Politico of an excerpt from former acting DNC Chair Donna Brazile's upcoming book. Brazile alleges she found "proof" that the 2016 Democratic primary was rigged in Clinton's favor. Brazile writes that she believes no laws were violated, but that a fundraising agreement "looked unethical."

The president tweeted, over a 3 1/2-hour span Friday:

--"Everybody is asking why the Justice Department (and FBI) isn't looking into all of the dishonesty going on with Crooked Hillary & the Dems.."

--"New Donna B book says she paid for and stole the Dem Primary. What about the deleted E-mails, Uranium, Podesta, the Server, plus, plus..."

--"People are angry.  At some point the Justice Department, and the FBI, must do what is right and proper. The American public deserves it!"

--"The real story on Collusion is in Donna B's new book. Crooked Hillary bought the DNC & then stole the Democratic Primary from Crazy Bernie!"

--"Pocahontas just stated that the Democrats, lead by the legendary Crooked Hillary Clinton, rigged the Primaries! Lets go FBI & Justice Dept." (He meant Sen. Elizabeth Warren, D-Mass., whom he has disparaged as "Pocahontas" because she has mentioned having American Indian heritage.)

--"Bernie Sanders supporters have every right to be apoplectic of the complete theft of the Dem primary by Crooked Hillary!"

--"I always felt I would be running and winning against Bernie Sanders, not Crooked H, without cheating, I was right."

-- “The rigged Dem Primary, one of the biggest political stories in years, got ZERO coverage on Fake News Network TV last night. Disgraceful!”

Late Thursday, Trump tweeted without evidence that he believed Democrats had acted "illegally."

The fundraising agreement Brazile wrote about, which was signed in August 2015 during the primary process, allegedly gave the Clinton campaign oversight of some DNC decisions. Months later, Clinton's chief challenger, independent Sen. Bernie Sanders, signed his own agreement with the party.