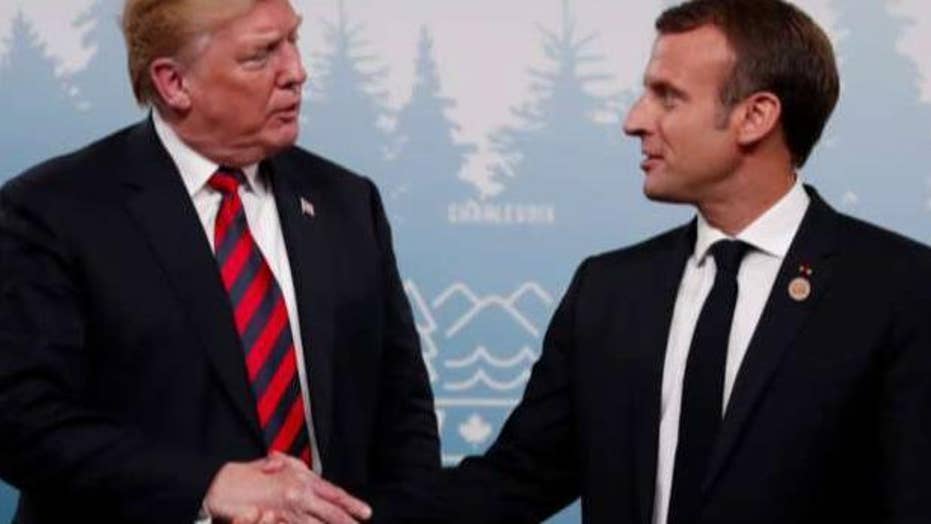 Why did the besieged French president lash out at Trump? Insight from Yoram Hazony, author of 'The Virtue of Nationalism,' and Mark Simokovsky, former NATO chief of staff.

President Trump on Tuesday ripped into French President Emmanuel Macron in a series of tweets -- hitting him on everything from his low approval ratings, to the French surrender to the Nazis in World War II, and suggesting U.S. wine is on par with French product.

Trump was tweeting after a visit to France over the weekend, where he marked the anniversary of the end of World War I. But the trip was marred after Macron said last week that Europe should build its own army, telling French radio: “We have to protect ourselves with respect to China, Russia and even the United States of America.”

Trump responded as he landed in France by describing the remarks as “very insulting.” On Tuesday, he returned to criticizing the idea by pointing to the French surrender to the Nazis during World War II.

“Emmanuel Macron suggests building its own army to protect Europe against the U.S., China and Russia. But it was Germany in World Wars One & Two - How did that work out for France?” he tweeted.”They were starting to learn German in Paris before the U.S. came along. Pay for NATO or not!”

Trump has repeatedly returned to the subject of the NATO burden, which he says results in the U.S. paying a lot of money to protect European countries. NATO itself does not have a defense budget, but members commit to spending a minimum of 2 percent of their Gross Domestic Product to defense spending -- although a number of countries, including France, do not meet this commitment.

On Tuesday, Trump also made reference to Macron’s low approval ratings, which have dived into the 20s in recent months.

“He was just trying to get onto another subject,” he said.

He also said “there is no country more Nationalist than France” and ended with a flourish of: “Make France Great Again!”

He may have been referring to comments Macron made over the weekend where he described nationalism as “a betrayal of patriotism.” 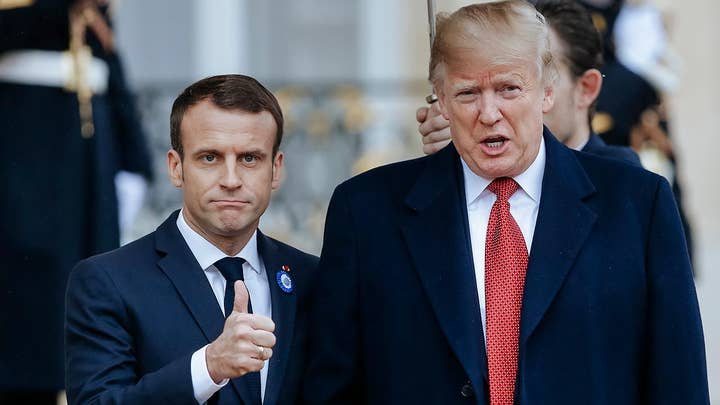 “By putting our own interests first, with no regard for others, we erase the very thing that a nation holds dearest, and the thing that keeps it alive: its moral values,” the Frenchman said.

The relationship between Trump and Macron has veered back and forth. In April, Macron paid a visit to Washington, where Macron called Trump “cher Donald” while Trump kissed the Frenchman and brushed “dandruff” off his shoulder. That affection was even on display over the weekend, when Macron reached over and squeezed Trump’s thigh during a bilateral meeting.

But since April, things have deteriorated as Trump has taken a hard stance toward tariffs with Europe, while Macron has cast himself as a leading proponent of globalism and has repeatedly criticized the kind of nationalism Trump espouses.

On Tuesday, Trump returned to the question of trade, and accused the French of making it hard for the U.S. to sell its wines into France.

“On Trade, France makes excellent wine, but so does the U.S.,” he said.