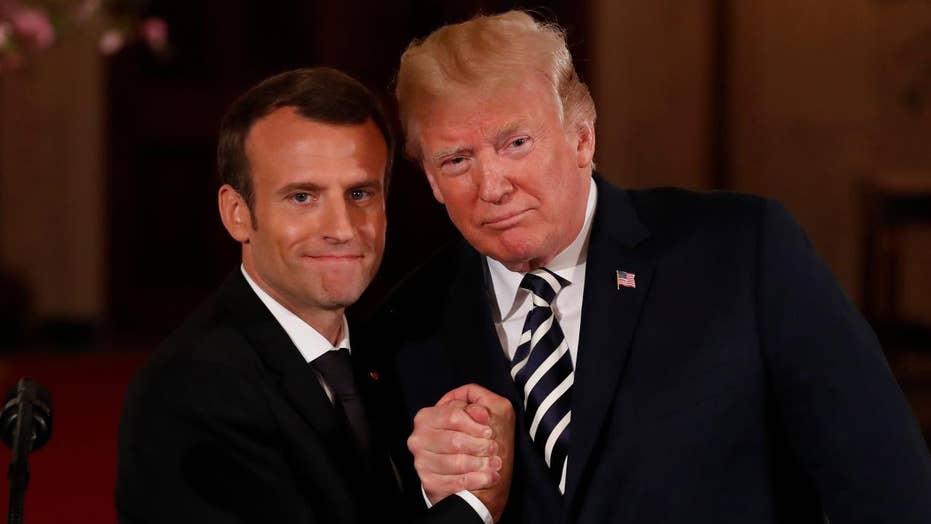 Recapping the best things said on camera this week.

President Trump touched down in France on Friday and immediately took a shot at President Emmanuel Macron for his recent call for a "European army," calling the idea "very insulting" and renewing pressure on the country to contribute more to NATO.

"President Macron of France has just suggested that Europe build its own military in order to protect itself from the U.S., China and Russia," Trump tweeted. "Very insulting, but perhaps Europe should first pay its fair share of NATO, which the U.S. subsidizes greatly!"

Trump was reacting to remarks Macron made earlier this week when he said Europe was “the main victim” of Trump’s decision to withdraw from the 1987 Intermediate-Range Nuclear Forces Treaty with Russia.

“We will not protect the Europeans unless we decide to have a true European army,” Macron said, according to The Wall Street Journal. He also grouped in the U.S. with the countries from which France needed protecting.

“We have to protect ourselves with respect to China, Russia and even the United States of America,” he said on French radio.

Trump is in France to mark the 100th anniversary of the end of World War I, where he will join fellow world leaders and have a one-on-one meeting with Macron -- who is facing political turmoil at home and as a result may take a tougher stance toward the president than previous meetings.

Macron met with Trump on American soil in April, in a meeting filled with public hand-holding, smiles and affection. Macron, who called Trump “cher Donald” (“Dear Donald”) engaged in an awkward fist-bump with, before being the recipient of a kiss from, the U.S. president.

“We have to make him perfect,” Trump said later, after brushing "dandruff" off the dashing centrist’s shoulder. “He is perfect.”

But there were signs even in April that things were not perfect between the two. Trump is the de facto leader of Western nationalism, while Macron has cast himself as the leading international proponent of European globalism. In an address to Congress, he called for the preservation of the Iran nuclear deal and the Paris climate deal -- from which the U.S. withdrew at Trump's direction.

At the United Nations in September, the Frenchman took a swipe at Trump’s brand of nationalism, criticizing a unilateralist approach that entails "a certain lawlessness where everyone pursues their own interests."

“I will never stop upholding the principle of sovereignty even in the face of a certain nationalism, which we’re seeing today, brandishing sovereignty as a way of attacking others," he said just hours after Trump addressed the General Assembly.

The spat over the European army indicates that relations could be deteriorating further.

Trump has often complained about the burden placed on the U.S. from NATO obligations, noting that the U.S. has an enormous military budget, part of which is spent covering protecting allies abroad -- including in Europe. In July, he complained, "We're protecting Germany, we're protecting France. We're protecting everybody. And yet we're paying a lot of money to protect."

According to NATO figures, total defense spending of all NATO members in 2017 was $917 billion, and the U.S. spent about $618 billion, meaning the U.S. spent approximately 70 percent of all NATO members. However, that figure was for all U.S. defense spending, not contributions to NATO. The U.S. also pays for approximately 22 percent of NATO's common funding.

But Trump's unhappiness with the comments are likely in part because Macron lumped in the U.S. with traditional European foes in his justification.

“For Macron to do it just a few days before President Trump goes to commemorate the centenary of the end of the Great War, the First World War, I think was absolutely crass in the extreme,” Farage, a Fox News contributor, said. “Maybe you can see now why his poll ratings are collapsing in France.”

The idea of some sort of European army has been mulled on the continent for decades in various forms. However, it is unlikely to see support from a number of countries. Italy is currently going through a nationalist and Eurosceptic resurgence. German Chancellor Angela Merkel is facing pressure from nationalists in her country, while Britain is leaving the European Union.

But while Macron's idea may be somewhat extreme and premature, it may also reflect the political difficulties he faces at home. His approval ratings have dived as low as 29 percent as he faces accusations of being out of touch, and struggles to deal with domestic economic problems and the repercussions of the 2015 migration crisis.

A number of politically awkward viral moments -- including him recently lecturing an out-of-work gardener to look harder for a job -- have not helped. 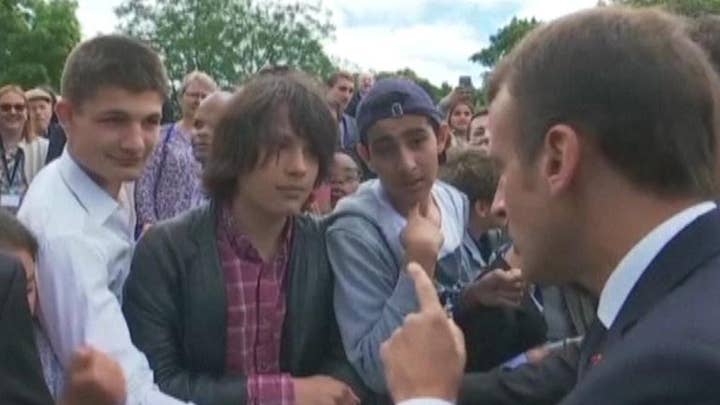 But Macron has brushed off concerns about lagging poll numbers. In a recent interview with Bloomberg News, he noted that unlike Trump he does not yet have to worry about poll numbers.

"I have a big advantage, I don’t have any midterms elections. So I am not driven by polls," Macron said. “I have to reform the country in depth. We will keep exactly the same pace.”

Despite the possible tensions between the two, Trump appeared confident of the trip.

“It should be beautiful,” he told reporters before departing Friday.