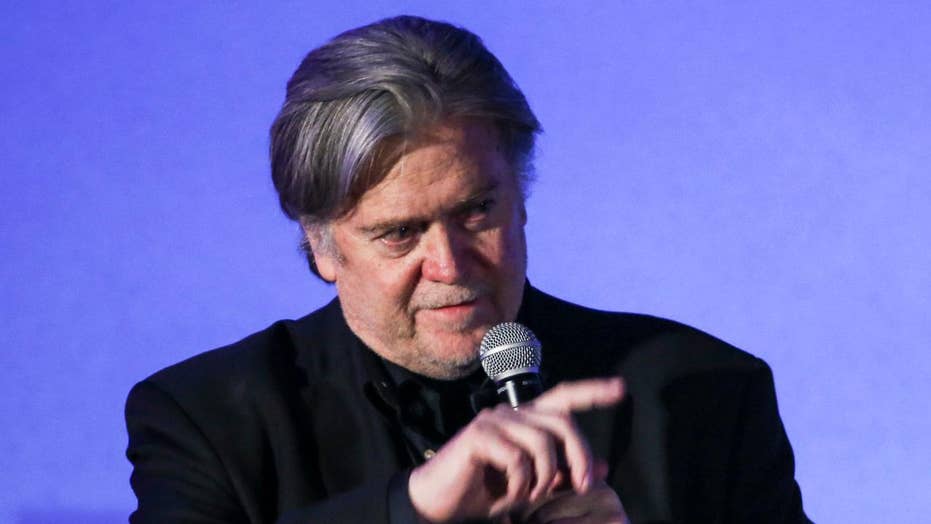 It’s probably safe to say the self-professed mastermind behind President Trump’s election won’t be back in 2020.

Trump issued a blistering, four-paragraph takedown of Steve Bannon on Wednesday, hours after it was reported that Bannon had called Donald Trump Jr. “treasonous” for meeting with Russian operatives during the campaign.

“Steve Bannon has nothing to do with me or my presidency,” Trump wrote. “When he was fired, he not only lost his job, he lost his mind. Steve was a staffer who worked for me after I had already won the nomination by defeating seventeen candidates, often described as the most talented field ever assembled in the Republican party.”

"Steve Bannon has nothing to do with me or my presidency."

The statement came after excerpts of a forthcoming book, “Fire and Fury: Inside the Trump White House,” by author Michael Wolff surfaced Wednesday. In the book, Bannon slams the president’s son, Donald Jr., Trump's son-in-law Jared Kushner and campaign chairman Paul Manafort and calls their infamous meeting with a Russian lawyer during the campaign “treasonous” and “unpatriotic.”

In his statement, Trump said Bannon didn't deserve any credit for his White House win.

“Steve Bannon has nothing to do with me or my Presidency,” Trump said in a statement. (The Associated Press)

“Now that he is on his own, Steve is learning that winning isn’t as easy as I make it look,” Trump said. “Steve had very little to do with our historic victory, which was delivered by the forgotten men and women of this country. Yet Steve had everything to do with the loss of a Senate seat in Alabama held for more than thirty years by Republicans. Steve doesn’t represent my base — he’s only in it for himself."

The president also accused Bannon of leaking to the media while serving as an adviser at the White House.

“Steve pretends to be at war with the media, which he calls the opposition party, yet he spent his time at the White House leaking false information to the media to make himself seem far more important than he was,” Trump said. “It is the only thing he does well.”

He added, “Steve was rarely in a one-on-one meeting with me and only pretends to have had influence to fool a few people with no access and no clue, whom he helped write phony books.”

Trump Jr. also fired back at Bannon in a series of tweets.

In a new book, Bannon slams the president’s son Donald Trump Jr., and calls his infamous meeting with a Russian lawyer during the campaign “treasonous” and “unpatriotic.” (Reuters)

"Steve had the honor of working in the White House & serving the country," the president's son said. "Unfortunately, he squandered that privilege & turned that opportunity into a nightmare of backstabbing, harassing, leaking, lying & undermining the President. Steve is not a strategist, he is an opportunist."

At the daily press briefing, White House Press Secretary Sarah Huckabee Sanders confirmed that there had been about a dozen visits by Wolff to the White House, but said that “close to 95 percent of them” were requested by Bannon.

As for Trump, there was one phone conversation between him and Wolff, lasting five to seven minutes, she said, but it had “nothing to do originally with the book.”

Trump and Bannon last spoke in the first part of December, according to Sanders.

Sanders said Trump was angry when he read what Bannon had said.

“I think 'furious,' 'disgusted' would probably certainly fit when you make such outrageous claims and completely false claims against the president, his administration and his family,” she said.

She also dismissed the allegation that Donald Jr.’s behavior was treasonous as “ridiculous.”

When asked if there would be a split in the base with a brewing war between Bannon and Trump, Sanders said that was not a concern.

“The base and people that supported this president support the president and his agenda; those things haven’t changed,” she said.

Asked if Bannon was off the list of those invited to social engagements, Sanders said, “Probably so.”

Bannon spent just over a year formally working for the president, leaving the White House in August and returning to Breitbart News, the populist news site.

“If there’s any confusion out there, let me clear it up: I’m leaving the White House and going to war for Trump against his opponents -- on Capitol Hill, in the media and in corporate America,” Bannon said at the time.

Recently, he notably backed former Alabama Supreme Court Chief Justice Roy Moore in the state contest for a Senate seat. Trump, on the other hand, backed appointed incumbent Sen. Luther Strange in the Republican primary, arguing that he was more electable.

Moore, facing allegations of past sexual misconduct, went on to lose the race for the seat once held by Attorney General Jeff Sessions to Democrat Doug Jones, who was sworn in on Wednesday as Alabama's newest U.S. senator.

After Jones was sworn in, Donald Trump Jr. sarcastically tweeted: "Thanks Steve. Keep up the great work."

He also said, "Andrew Breitbart would be ashamed of the division and lies Steve Bannon is spreading!"

On Wednesday, after Trump's statement, the Twitter account of Senate Majority Leader Mitch McConnell -- who has sparred with Bannon -- released an image of a smiling McConnell.

Trump was gracious when Bannon left the White House, thanking him for his help during the campaign.

“I want to thank Steve Bannon for his service,” the president tweeted. “He came to the campaign during my run against Crooked Hillary Clinton -- it was great! Thanks S.”

Bannon joined Trump’s team in August 2016, when he was tapped as chief executive of the campaign.

After Trump won the presidential race, Bannon was appointed to a senior adviser role at the same time that Reince Priebus was named chief of staff.