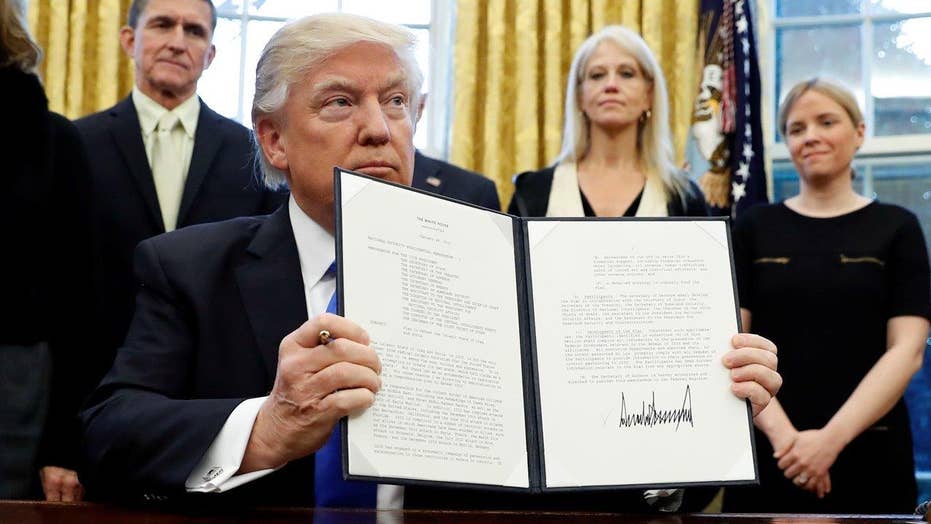 “America is a proud nation of immigrants, and we will continue to show compassion to those fleeing oppression. But we will do so while protecting our own citizens and border,” Trump said Sunday afternoon. “This is not a Muslim ban, as the media is falsely reporting. … My first priority will always be to protect and serve our country, but as president I will find ways to help all those who are suffering.”

Trump issued the statement as hundreds of protesters marched in Washington and in other cities across the country to protest the president's self-described “extreme vetting” -- which resulted this weekend in dozens of foreign visitors and some legal permanent U.S. residents being detained at domestic airports.

Earlier in the day, Senate Minority Leader Chuck Schumer, D-N.Y., staged a press conference with some immigrant children and adults impacted by the bans and vowed to fight them on Capitol Hill “with every fiber of my being.”

Sen. Diane Feinstein, D-Calif., said that she would introduce two bills Monday. One of the bills would rescind Trump's order, while the other would give Congress greater oversight of the president's immigration authority.

And California Democratic Rep. Lou Correa said the executive orders on illegal immigration “directly challenge the right to due process under the Constitution” and that he’ll introduce legislation to fund legal aid to those who are “targeted.”

Congressional Democrats led by Schumer, who said he’s already appealed to Homeland Security Secretary John Kelly, will have a difficult task getting any kind of measure through the Republican-control Congress that would reverse the executive order.

“I doubt many Arkansans or Americans more broadly object to taking a harder look at foreigners coming into our country from war-torn nations with known terror networks. I think they’re wondering why we don’t do that already,” said Arkansas GOP Sen. Tom Cotton, who as an Army officer served combat tours in Afghanistan and Iraq.

However, Trump is facing opposition for some congressional Republicans, including Reps. Ileana Ros-Lehtinen, of Florida, and Barbara Comstock, of Virginia, along with Sens. Ben Sasse, of Nebraska, Lindsey Graham, of South Carolina, and John McCain, of Arizona.

"It is clear from the confusion at our airports across the nation that President Trump's executive order was not properly vetted,” Graham and McCain said in a joint statement. "Ultimately, we fear this executive order will become a self-inflicted wound in the fight against terrorism.”

Trump, a Republican, tweeted in response that the statement was “wrong” and that the senators were “sadly weak on immigration.”

On Saturday afternoon -- as reports surfaced about foreign visitors being detained at New York’s Kennedy airport and elsewhere -- Trump said his plan to prevent Islamic terrorists and others for attacking the United States was “working out very nicely.”

But by Saturday evening, a federal judge in Brooklyn issued a temporary halt on the part of the executive order that allows the Trump administration to deport people from the largely-Muslim countries.

“Our country needs strong borders and extreme vetting, NOW. Look what is happening all over Europe and, indeed, the world - a horrible mess!,” Trump tweeted Sunday morning.

Meanwhile, Kellyanne Conway, counselor to the president, told “Fox News Sunday”: “These are countries that have a history of training, harboring, exporting terrorists.”

And White House Chief of Staff Reince Priebus argued that as many as 80 percent of Americans agree with the policy change, while dismissing media reports about chaotic scenes Saturday at U.S. airports.

“I do not think there was any chaos,” he told NBC’s “Meet the Press,” while predicting more people will be detained and offering “no apologies.”

Priebus also seemed to suggest that foreign arrivals who have so-called “green cards” that allows them to permanently live and work in the United States will not be subject to the additional screenings.

“As far as green-card holders going forward, it doesn’t affect them,” he told NBC.

Kelly said later that allowed green card holders into the country  was "in the national interest” of the country.

Trump, Conway and Priebus argued Sunday that the seven countries were in fact identified by President Obama in 2015 and pointed out that roughly 40 other such nations included Afghanistan, Egypt and Saudi Arabia were not part of the travel ban.

Trump is also facing opposition from attorneys general in 15 states and the District of Columbia, who issued a statement Sunday condemning his order as “unconstitutional, un-American and unlawful.”