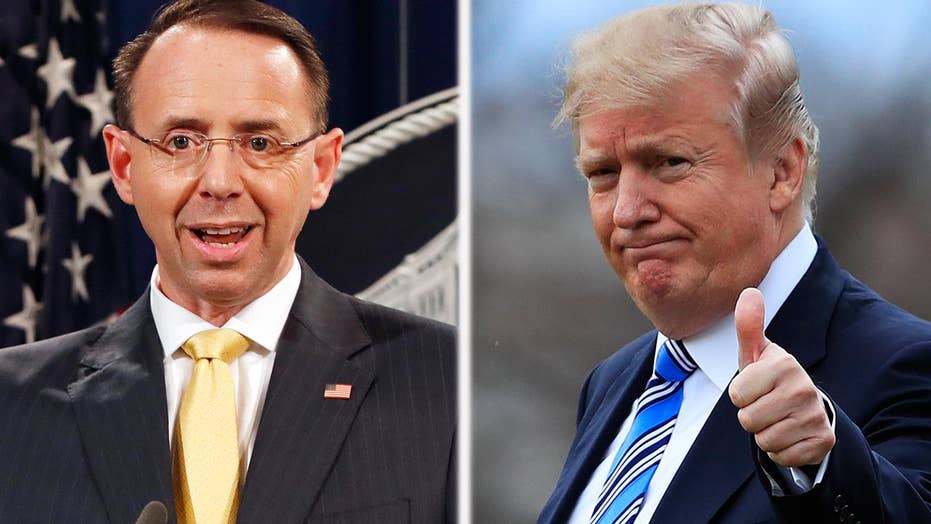 Is indictment of Russian nationals vindication for Trump?

President Trump on Sunday launched a tweet storm over the investigations by the Justice Department and others into Russia election meddling -- writing that “they are laughing their a---s off in Moscow.”

“If it was the GOAL of Russia to create discord, disruption and chaos within the U.S. then, with all of the Committee Hearings, Investigations and Party hatred, they have succeeded beyond their wildest dreams. They are laughing their a---s off in Moscow. Get smart America!” Trump tweeted after a federal grand jury on Friday indicted 13 Russian nationals and three Russian companies for allegedly interfering in the 2016 presidential elections.

The case was brought by Robert Mueller, special counsel for the Justice Department, who is investigating whether the Trump campaign colluded with Russia in the elections. The federal case also argued that Russia has been interfering with U.S. elections since 2014.

Trump also seemed to fire back Sunday at critics who said the indictments show he was wrong in saying Russia didn’t meddle in his 2016 presidential election.

“I never said Russia did not meddle in the election,” the president tweeted. “I said ‘it may be Russia, or China or another country or group, or it may be a 400-pound genius sitting in bed and playing with his computer.’ The Russian ‘hoax’ was that the Trump campaign colluded with Russia -- it never did!”

The Russian defendants are accused of spreading derogatory information about several 2016 White House candidates, including Trump and Democratic presidential nominee Hillary Clinton. However, the Justice Department made clear in its case that the indictment does not allege that any of the interference changed the outcome of the presidential race.

“Finally, Liddle’ Adam Schiff, the leakin’ monster of no control, is now blaming the Obama Administration for Russian meddling in the 2016 Election,” the president tweeted. “He is finally right about something. Obama was President, knew of the threat, and did nothing. Thank you Adam!”

On Saturday, H.R. McMaster, Trump’s national security adviser, said the indictments show “the evidence is now incontrovertible” that Russians meddled in U.S. elections, which Trump critics also seized upon to say he was wrong about the meddling.

“General McMaster forgot to say that the results of the 2016 election were not impacted or changed by the Russians and that the only Collusion was between Russia and Crooked H, the DNC and the Dems. Remember the Dirty Dossier, Uranium, Speeches, Emails and the Podesta Company!” Trump tweeted hours later.

Trump also took a shot at CNN on Sunday, re-tweeting a cartoon by A.F. Branco that shows the cable network star Wolf Blitzer in the year 2038, slumped over and using a cane, saying: “UPDATE! We should see evidence of Russia-Trump collusion any day now.”