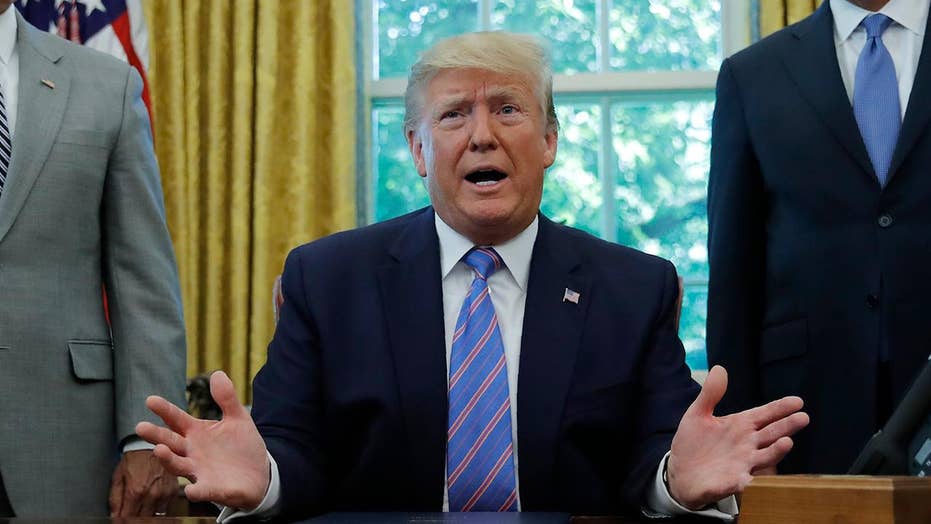 President Trump ramped up his criticism Tuesday of New York Gov. Andrew Cuomo's administration, accusing him and state Attorney General Letitia James of harassing businesses including his own and saying high taxes and lawsuits are forcing many to flee to low-tax states like Texas.

He suggested the National Rifle Association could be next to go.

“People are fleeing New York like never before. If they own a business, they are twice as likely to flee. And if they are a victim of harassment by the A.G. of the state, like what they are doing to our great NRA, which I think will move quickly to Texas, where they are loved,” Trump tweeted.

“Texas will defend them & indemnify them against political harassment by New York State and Governor Cuomo. So many people are leaving New York for Texas and Florida that it is totally under siege,” he continued. “First New York taxes you too high, then they sue you, just to complete the job.”

The president’s tweets come after he blasted the same two officials on Monday for “harassing all of [his] New York businesses in search of anything at all they can find to make me look as bad as possible.”

James, whom Trump said was being used by Cuomo as a “bludgeoning tool,” has been leading several Trump-related investigations since taking her post last year.

But in April, James’ office also launched an investigation into the NRA’s finances, amid a rift between the Second Amendment rights group’s leadership and accusations of financial misconduct.

The NRA sued Cuomo last year, claiming that Cuomo’s “blacklisting” campaign threatened its ability to pursue its mission. The group said it lost insurance coverage after New York’s actions, which they claimed blocked organizations from doing business with the NRA.

Meanwhile, the state's Trump-focused probes included the lawsuit against the Trump Foundation in 2018, claiming it engaged in illegal activity and “unlawful political coordination” to benefit Trump’s personal and business interests. The Foundation agreed to dissolve, and James called on Trump to pay $8.4 million in penalties and restitution as part of the settlement.

James, before taking office, warned that she would “use every area of the law” to investigate the Trump family.

Her office is also currently investigating the Trump Organization for allegedly underpaying undocumented immigrants who worked at a Trump-owned golf club. They also subpoenaed financial records including loan applications and mortgages from institutions including Deutsche Bank as part of a probe of Trump Organization projects.

Trump blasted all of the investigations on Monday as part of a “political Witch Hunt.”

Cuomo, in response, said he has “reduced taxes” in the state of New York, but said that nothing Trump says “can surprise me or the people of this country.” He also denied using James as his “tool,” reminding that she was elected by the people of New York—not chosen by him.