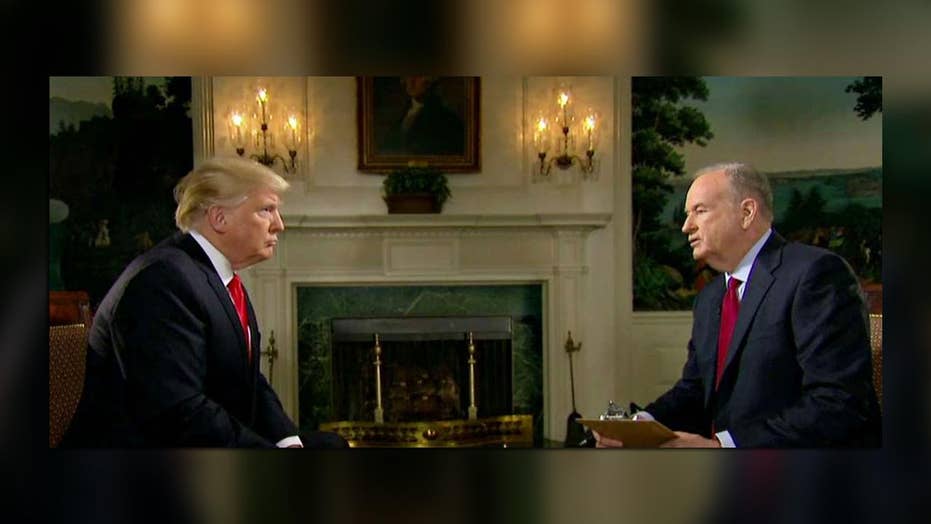 Bill and President Trump discuss Iran, Mexico and the future of healthcare on 'The O'Reilly Factor'

President Donald Trump told Fox News' Bill O'Reilly in an exclusive interview broadcast Monday that Mexican President Enrique Pena Nieto "has got a problem" with drug cartels in his country and could need U.S. assistance.

Trump was responding to reports that he told Pena Nieto in a phone call last week that the U.S. would send troops to Mexico to tackle the drug gangs, which the president said were "poisoning the youth of our country and ... countries all over the world."

The president told O'Reilly that the Mexican leader was "a very good man" and claimed that the two had "a very good relationship."

"I did talk to him about it. I want to help him with it," the president said. "We’ve got to stop drugs from coming into our country and if he can’t handle it –and maybe they can or maybe they can’t or maybe he needs help."

Trump has repeatedly vowed to construct a massive wall along the southern border, a vow he repeated to O'Reilly. He also said that he would revisit the North American Free Trade Agreement with Mexico and Canada, a pact he repeatedly criticized on the campaign trail.

"I’m going to put another F in the name NAFTA," Trump said. "Because right now it’s free trade and I’m going to have it ‘fair trade’ also, because it’s not fair. We’re losing $60 billion a year in trade deficits with Mexico. Can’t do that."

The president also criticized a push by California lawmakers to make the Golden State a so-called "sanctuary state" that would prohibit local law enforcement from cooperating with immigration authorities.

"I think it's ridiculous," Trump said. "I will tell you that sanctuary cities are – they’ve got a lot of problems and there’s tremendous crime. A lot of people agree with me, this was a campaign issue.

"We will certainly not stand for sanctuary even cities, let alone states."

Trump also said that California "in many ways is out of control ... from an economic standpoint ... People are leaving California [and] going to Texas and other places that are run in a different manner, but we’ll see what happens."

The president also discussed his relationship with his precessor in the Oval Office, Barack Obama.

Trump acknowledged that he and Obama had been "vicious" to each other during last year's election campaign.

"We said horrible things about each other, and then we hop into the car [on Inauguration Day] and we drive down Pennsylvania Avenue together and we don’t even talk about it," the president said. "Politics is amazing."