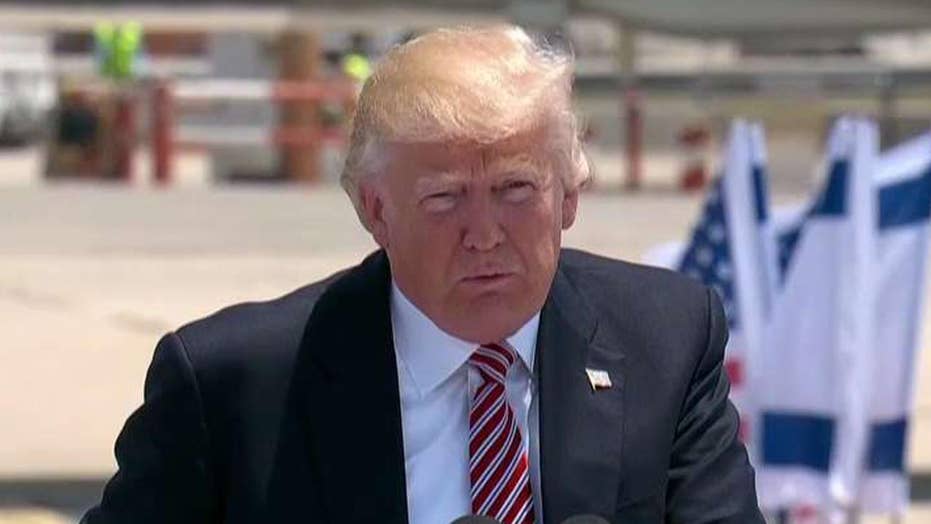 Trump to Israel: We are with you

President addresses the crowd during arrival ceremony in Tel Aviv

President Trump, during high-stakes meetings in Jerusalem, said Monday that a shared international concern over Iran is driving Israel and Arab states in the region closer while further alienating Tehran from the global community.

“We are more than friends – we are great allies,” Trump said, speaking alongside Israeli Prime Minister Benjamin Netanyahu.

The pleasantries between the two continued as the Israeli leader told Trump “how much we appreciate the change in American policy on Iran” and the “reassertion of American leadership in the Middle East.”

Trump arrived in Israel after a weekend swing through Saudi Arabia, Iran’s main rival in the region. The Iranian threat has been a chief theme of the U.S. president’s remarks as he seeks to reassure Middle East allies and bring them together toward common goals -- including the "rare opportunity" of an Israeli-Palestinian peace deal.

“There is a growing realization among your Arab neighbors that they have common cause with you in the threat posed by Iran,” Trump said, speaking earlier alongside Israeli President Reuven Rivlin.

He said “there’s a great feeling for peace throughout the Middle East,” and suggested a potential warming by other countries toward Israel could be one “benefit” to the long-running tensions over Iran.

On the sidelines of Monday's meetings, Trump was still dealing with the fallout from a report a week ago that he divulged classified information in a meeting with Russian diplomats -- supposedly intelligence that came from Israel. Trump, though, told reporters Monday that he "never mentioned the word or the name Israel" in his conversation with Russia's foreign minister and ambassador.

"So you have another story wrong," he said.

Various reports, quoting anonymous officials, have said Trump did share classified information with Russian diplomats about the threat posed by the Islamic State group, and several have said that information came from Israeli intelligence. But news accounts have not accused Trump of naming Israel as a source of the information.

Netanyahu said that U.S.-Israeli intelligence cooperation is "terrific," attempting to dismiss concerns that the incident violated the confidentiality of an agreement with Israel.

On Monday, Trump also placed a note in the Western Wall, becoming the first sitting U.S. president to visit one of Judaism's holiest sites. Trump stood alone in front of the wall with his hand on it before tucking a note between the cracks.

First lady Melania Trump, the president's daughter Ivanka Trump, and son-in-law Jared Kushner joined Trump at the Western Wall as well as during a visit to the Church of the Holy Sepulchre. The church was built to commemorate the location where most Christians believe Jesus was crucified and buried.

Even Trump's flight path was a potential first, with his travels from Riyadh to Tel Aviv thought to be the first direct flight between Saudi Arabia and Israel.

Trump explicitly said Monday that Saudi King Salman would “love to see peace between the Israelis and the Palestinians.”

“We have a rare opportunity to bring stability and peace in this region, defeat terror and create a future of peace,” Trump said after speeches from Rivlin and Netanyahu upon arriving. “We can only get there by working together – there is no other way.”

Trump’s remarks came after Netanyahu expressed his willingness to make peace with the Palestinians.

“Israel shares commitment to peace – already made with Egypt and Jordan,” he said. “Peace we seek is durable in which the Jewish state is recognized, security remains in Israel’s hands and conflict ends once and for all.”

On Tuesday, Trump will meet with Palestinian Authority President Mahmoud Abbas. After hosting Abbas at the White House in March, Trump boldly stated that achieving peace is "something that I think is, frankly, maybe not as difficult as people have thought over the years."

"But we need two willing parties," he continued. "We believe Israel is willing. We believe you're willing. And if you both are willing, we're going to make a deal."

White House aides have tried to play down expectations for significant progress on the peace process during Trump's stop, casting it as more symbolic than substantive.