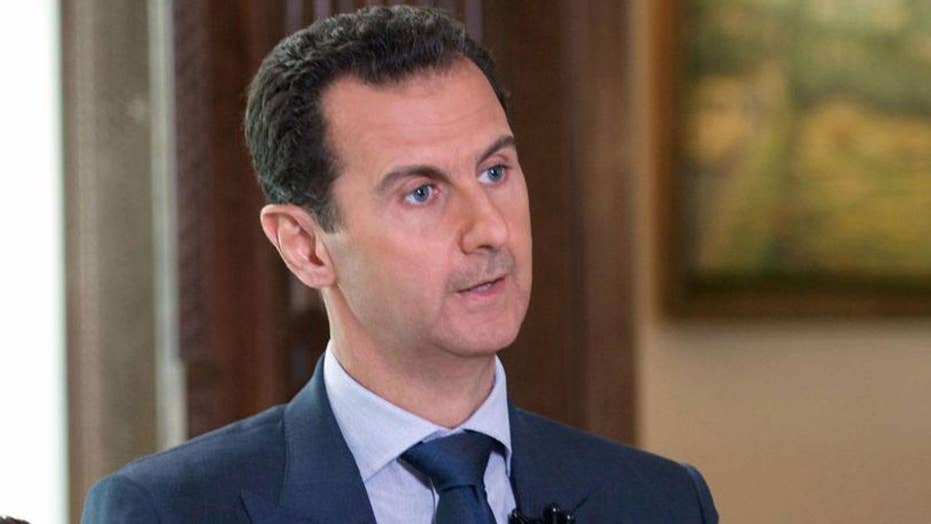 Trump inherits Obama's 'red line,' but will he handle Assad?

President Trump condemned the deadly chemical weapons strike in Syria in his strongest terms yet on Wednesday, saying the attack which he blames on the Assad regime “cannot be tolerated” – just minutes after his U.N. envoy hinted at the possibility of unilateral action.

The president, speaking at a joint press conference in the Rose Garden with Jordan's visiting King Abdullah II, called the attack “horrific.”

He condemned the strike against “innocent people including women, small children and even beautiful little babies” and said “their deaths was an affront to humanity.”

“These heinous actions by the Assad regime cannot be tolerated,” Trump said. “The United States stands with our allies across the globe to condemn this horrific attack.”

Trump declined to specify what, exactly, he might do in response, but indicated his past resistance to intervention in the region could be softening – just days after reports that the administration was shifting U.S. focus away from trying to push Bashar Assad from power.

“My attitude toward Syria and Assad has changed very much,” Trump said Wednesday, saying the latest attack “had a big impact on me.”

He again lamented the Obama administration’s “blank threat,” after it did not respond with military force the first time it accused the Assad regime of crossing a “red line” with chemical weapons.

Asked if the latest attack crossed such a line, Trump said: “It crossed a lot of lines for me … That crosses many, many lines, beyond a red line.”

Later in the day, Secretary of State Rex Tillerson said: "There's no doubt in our mind that the Syrian regime under the leadership of Bashar al Assad is responsible for this horrific attack."

He also said Russia "really needs to think carefully" about its "continued support" for the Assad regime.

Abdullah, standing beside Trump after meetings at the White House, said the “threshold of inhumanity and savagery” is being crossed every day and he fully supports Trump on the issue.

The two leaders met amid a host of international crises, the most pressing of which is the chemical attack in rebel-held northern Idlib that killed dozens of civilians Tuesday -- one of the worst attacks since the civil war began.

The White House says Assad's government is responsible. But Russia says anti-Assad rebels are to blame. Russia's military says the chemicals were dispersed when Syrian warplanes bombed a facility where rebels were building chemical weapons.

"When the United Nations consistently fails in its duty to act collectively, there are times in the life of states that we are compelled to take our own action," declared Ambassador Nikki Haley. She addressed an emergency meeting of the Security Council, which was weighing a resolution condemning chemical weapons use in Syria. Russia, which has veto power, is opposed.

Officials say Secretary of State Rex Tillerson will discuss Syria with Russian leaders next week when he visits Moscow. It's the first announced visit by a top U.S. official to Russia since President Donald Trump's inauguration.