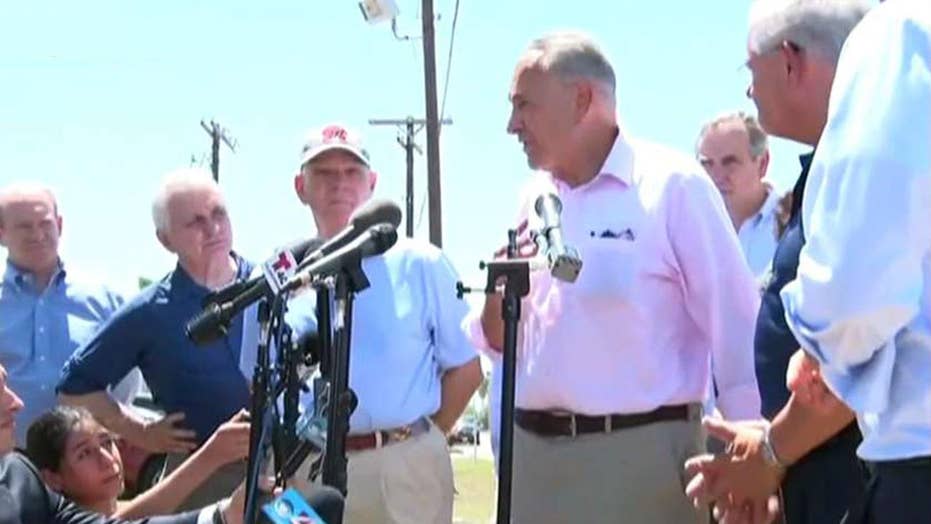 Schumer: What we saw at border facilities was unbearable, inhumane, heartbreaking

President Trump late Sunday said in a Twitter post that he intends to set up a meeting with Senate Minority Leader Chuck Schumer after the New York Democrat recently toured a detention center and called the conditions there "inhumane."

Schumer joined a dozen Senate Democrats at the border on Friday. He called the tour “difficult.” He told the media that seeing the children held in such poor conditions pulls at your heartstrings.

He later tweeted a video from the tour, saying, “This is heart-wrenching. This is wrong. This is not who we are. This has to end now.”

Trump said on Twitter that while Schumer was touring a facility, a “large group of illegal immigrants” rushed border agents in an attempt to enter the U.S. He said some agents were injured.

The Pharr-Reynosa International Bridge, which connects the southern Texas city of Pharr to Reynosa, Mexico, was temporarily closed on Friday after a group of about 47 undocumented individuals tried to enter the U.S., KGBT reported, citing a Border Patrol statement.

Agents were forced to use tear gas to stop the group, the report said. Some agents were assaulted. Border Patrol did not immediately respond to an email from Fox News.

Trump seized on the incident to show the urgency to act.

“Based on the comments made by Senator Schumer, he must have seen how dangerous & bad for our Country the Border is,” Trump tweeted. “It is not a “manufactured crisis,” as the Fake News Media & their Democrat partners tried to portray.”

Schumer, along with other Democrats, criticized Trump in the past for using the issue at the border as a “manufactured crisis.” During the 35-day partial government shutdown, Schumer said Trump was manufacturing a crisis to divert attention from the turmoil in his administration,” according to The Hill.

Tom Homan, the former head of Immigration and Customs Enforcement, told Fox News the problem at the border is due to Congress’ ineptitude.

“Name one thing that Chuck Schumer has done to solve this crisis or address this crisis than vilify the men and women at Border Patrol,” he said.

He said Congress ignored earlier pleas from the agency for more funding to address the surge, but Congress has taken long to act.