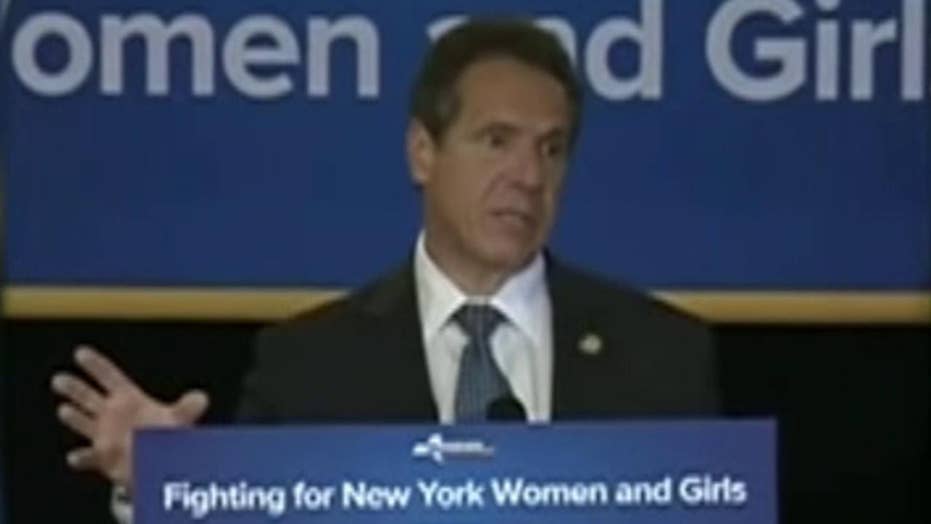 President Trump fired back at New York Gov. Andrew Cuomo late Wednesday, saying the Democrat was having "a total meltdown" after he declared at an earlier bill-signing that America “was never that great.”

The Democrat made the seemingly off-hand comment as part of his rebuke of President Trump's "Make America Great Again" slogan during the event in New York. But the line drew gasps from the crowd.

"We're not going to make America great again. It was never that great," Cuomo said.

In response to the remark, Trump tweeted, "Can you believe this is the Governor of the Highest Taxed State in the U.S., Andrew Cuomo, having a total meltdown!"

Cuomo fired back at the president on Twitter shortly after.

"@RealDonaldTrump: What you say would be 'great again' would not be great at all...We will not go back to discrimination, segregation, sexism, isolationism, racism or the KKK," the tweet said.

During Wednesday's event, Cuomo went on to say that the country had not yet achieved "greatness."

“We’re not going to make America great again. It was never that great,” Cuomo told the crowd in New York. (AP)

Following the remarks, a spokeswoman for the governor stressed that he "believes America is great," which will become more evident "when every man, woman, and child has full equality. America has not yet reached its maximum potential."

TRUMP DARES NY GOV. CUOMO TO RUN AGAINST HIM IN 2020, SAYS 'ANYBODY THAT RUNS AGAINST TRUMP SUFFERS'

"When the President speaks about making America great again - going back in time - he ignores the pain so many endured and that we suffered from slavery, discrimination, segregation, sexism and marginalized women's contributions," Cuomo's press secretary, Dani Lever, said in the statement. "The Governor believes that when everyone is fully included and everyone is contributing to their maximum potential, that is when America will achieve maximum greatness."

The New York Democrat is currently engulfed in a gubernatorial primary race against actress and activist, Cynthia Nixon. He is also considered a potential White House contender in 2020.