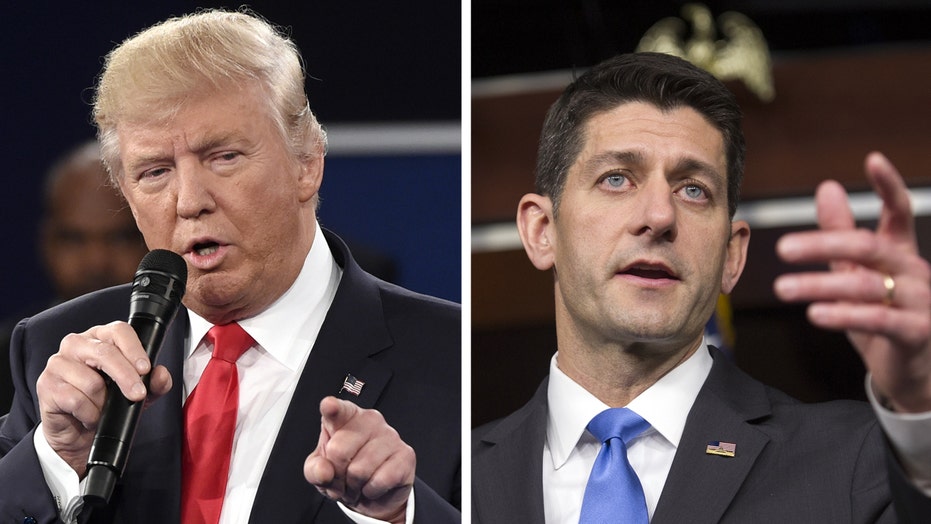 Trump tweets: Ryan should stop wasting his time fighting me

Donald Trump clashed with House Speaker Paul Ryan on Monday after the top congressional Republican told rank-and-file lawmakers he will not campaign with the party’s presidential nominee or defend him – and even suggested he’s preparing for a Hillary Clinton presidency.

The details of Ryan’s comments came from sources on a conference call late Monday morning for GOP House leaders and rank-and-file members. The call was scheduled after the release Friday of a 2005 audiotape in which Trump is heard bragging about being able to kiss and grope women because he is a celebrity.

Trump has apologized repeatedly for the comments – but despite an aggressive debate performance Sunday where he sought to turn the tables on Clinton, Ryan said on the call he won’t campaign with Trump. According to sources, Ryan and other House GOP leaders also told those on the call to “do what’s best for you in your district” – advice that speaks to their concern about the impact Trump’s controversies could have down the ballot.

Ryan even appeared to signal the White House race might be a lost cause when he suggested in the call that the party should focus on ensuring that Clinton “does not get a blank check with a Democrat-controlled Congress.”

Ryan’s office later said he was not conceding the election's outcome and made clear he wasn’t walking back his endorsement either.

But Trump responded after the call by tweeting: “Paul Ryan should spend more time on balancing the budget, jobs and illegal immigration and not waste his time on fighting Republican nominee.”

Pro-Trump Republicans also pushed back during the call and said Trump can still prevail and should not be abandoned.

Trump still retained the backing of the Republican National Committee, which has overseen crucial field efforts for the candidate in battleground states. On a conference call with RNC members Monday afternoon, chairman Reince Priebus said the party remains in full coordination with Trump.

"Everything is on course," Priebus said, according to a participant in the call.

All 435 House members are up for reelection in November, including 246 Republicans.

Until the 2005 Trump tape was released, most political analysts predicted Republicans would keep their House majority but said the race to control the Senate will be razor close, regardless of whether Trump or Clinton, the Democratic presidential nominee, wins the presidential contest.

By Saturday, Ryan had already denounced Trump’s lewd comments on the tape about women -- calling them “disgusting” -- and uninvited the nominee to a weekend rally in his home state of Wisconsin.

However, he did not withdraw his endorsement of Trump, as other congressional Republicans -- including several in tight reelection bids -- said they no longer support their nominee or that he should quit the race.

New Hampshire GOP Sen. Kelly Ayotte, deadlocked in her bid for a second term, said this weekend that she favors Trump quitting the race.

And Pennsylvania GOP Rep. Charlie Dent, chairman of the House Ethics Committee, told ABC on Sunday that his party still has enough time to rally behind an alternative to Trump, with running-mate Indiana Gov. Mike Pence among the names mentioned.

Trump trails Clinton by 4.6 percentage points, according to the RealClearPolitics polls average.

Before the late-morning conference call, former GOP House Speaker Newt Gingrich told Fox News that the defectors have “egg on their face” after Trump’s debate performance. He urged the uneasy Republicans to “reconsider.”

Trump campaign manager Kellyanne Conway also suggested the team still wants and needs the defecting Republicans, particularly those running in so-called battleground states in which the White House race will be decided.

“We welcome them back,” she said on MSNBC’s “Morning Joe.” “We would love their support. We have a lot of their voters' support.”

However, by the time the call was over, Trump and his team had struck a different tone -- returning to the message that the campaign’s mission is to unseat the Washington political class that no longer acts in the best interest of America’s middle class.

Later in the day, Corey Stewart, the chairman of Trump's Virginia campaign, said Ryan and other party elite didn't understand that "the grass roots took control of this party when we nominated Donald Trump."

Stewart said he was leading a group of Republicans to protest outside party headquarters near the Capitol Monday afternoon.

Stewart was fired immediately after the protest, which drew dozens of angry Trump supporters to the front step of the Republican National Committee headquarters.