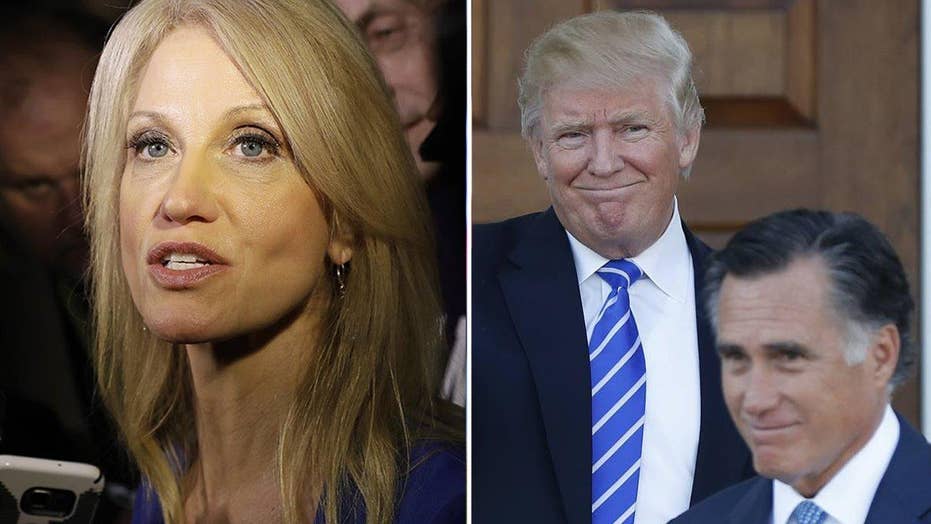 Donald Trump adviser Kellyanne Conway’s extended public criticism of Mitt Romney in the secretary of state sweepstakes spilled over Monday with reports that the president-elect is “furious” with Conway.

Conway, in turn, then reportedly called the anonymous allegations “sexist” and boasted about her irreproachable status.

She began her attack on Romney shortly after he interviewed with Trump nine days ago about becoming the country’s top diplomat, reminding Americans about how Romney called Trump a “con man” and a “phony.”

This weekend, Conway turned up the heat when she appeared on Sunday talks shows to say that Trump supporters feel “betrayed” over Romney, a former GOP presidential nominee, even being in the running.

Trump -- who since his Nov. 8 win has been huddled with his transition team trying to fill Cabinet posts and other key administration positions -- is “furious” with Conway, MSNBC’s “Morning Joe” reported Monday, reportedly based on information from two transition team sources.

Conway -- who joined the Trump campaign in the closing stages of the race and helped guide the first-time candidate to what once seemed an improbable victory -- shot back at the accusations.

She called the sources “sexists” and said she can have “any job she wants,” either inside or outside the White House, according to the show.

The MSNBC sources reportedly spoke directly with Trump about the issue and said that Conway’s behavior feeds into a growing concern that she is no longer a team player and has gone “rogue.”

Incoming White House Chief of Staff Reince Priebus is downplaying any infighting, but acknowledged on “Fox News Sunday” that there are “teams of rivals.”

Conway, now a senior transition team adviser, appears to support former New York Mayor Rudy Giuliani for the secretary of state post. Or she is at least advocating on behalf of the grassroots Trump supporters who helped the first-time candidate to victory and who appear to back Giuliani, an early and loyal Trump backer.

Conway tweeted Monday that she’s expressed her opinion to Trump and will support his decision.

“I already have the job I want,” she also tweeted.

Former GOP House Speaker Newt Gingrich is another member of Trump’s inner circle who has voiced his opposition to Romney.

Some strategists suggested Monday that Conway’s weekend comments were carefully coordinated so Trump could say he tried to reach out to the party’s establishment wing.

Romney will be in New York City on Tuesday to talk for a second time with Trump. And Tennessee GOP Sen. Bob Corker, chairman of the Senate Committee on Foreign Relations, is also scheduled to meet that day with Trump.

On Monday, retired CIA Director and retired Army Gen. David Petraeus visited Trump Tower in Manhattan to meet with the president-elect, with the secretary of defense post still open.