Trump addresses the nation from the East Room of the White House, thanks supporters, blasts dirty cops, leakers and liars.

President Trump, commanding a triumphant scene at the White House complete with the playing of “Hail to the Chief,” railed against what he called an “evil” impeachment process on Thursday hours after his historic acquittal in the Senate.

Greeted by thunderous applause and a standing ovation by his supporters, the president declared "we went through hell" but described the moment as a "celebration" -- while maintaining as he did throughout the impeachment inquiry and trial that he "did nothing wrong."

And on a day when he and House Speaker Nancy Pelosi were trading shots in deeply personal terms, Trump turned fire on those who prosecuted the case and other investigations against him. He called Pelosi and House Intelligence Committee Chairman Adam Schiff "horrible" and "vicious" people.

“It was evil. It was corrupt. It was dirty cops. It was leakers and liars. This should never, ever happen to another president, ever,” Trump said. “It was a disgrace.”

He detailed the timeline of investigations, remarking of the Russia probe: "It was all bulls---."

And as he did earlier Thursday at a prayer breakfast, Trump brandished a copy of the day's Washington Post with a blaring headline: "Trump acquitted."

"We can take that home, honey. Maybe we'll frame it," he joked to first lady Melania Trump, saying that it was the "best" headline he's ever received from the outlet. 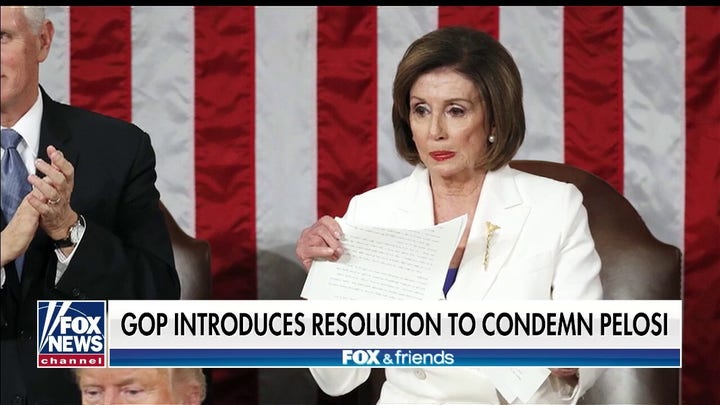 The Senate on Wednesday acquitted the president on both articles of impeachment against him—abuse of power and obstruction of Congress—following a weeks-long trial.

The only party defection was on the abuse of power charge from Sen. Mitt Romney, R-Utah, who declared hours before the final vote that Trump had engaged in as “destructive an attack on the oath of office and our Constitution as I can imagine.” Romney, though, voted not guilty on the obstruction charge.

"Now we have that gorgeous word, I never thought I’d hear it," Trump said Thursday. "It's called total acquittal."

After a while, Thursday's more than hour-long address shifted into a rhetorical high-fiving and back-slapping phase as Trump went around the room and began thanking Republican lawmakers.

"You did a fantastic job," Trump said, joking about his reputation as a quiet and shrewd political operator. "He's the greatest poker player, right?" 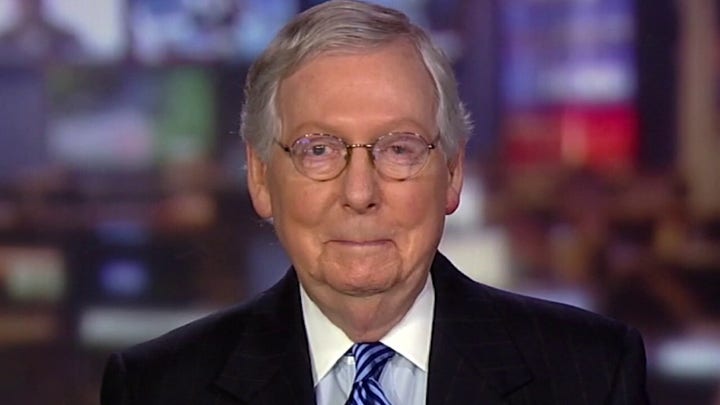 And he told House GOP Leader Kevin McCarthy he'll someday be speaker of the House.

During another moment, the president joked with Sen. Chuck Grassley, R-Iowa, touting his "incredible" voice, saying he has one "that scares people."

And in a bizarre moment, he even called out Rep. Jim Jordan, R-Ohio, an adviser to his impeachment legal team, on his physique.

"When I first got to know Jim Jordan, I thought, huh, he never wears a jacket," Trump said, touting Jordan's college wrestling career. "What the hell's going on. He's very proud of his body."

Trump then shifted to thank House Minority Whip Steve Scalise, R-La., who he said has become even more "handsome" since he was shot at a congressional baseball practice in 2017.

"Steve Scalise, I think you're better looking now," Trump said. "You weren't that good looking, he looks better now. I don't know what the hell that is!"

The president’s address Thursday comes after he literally waved his acquittal in Pelosi's face. The president, at the National Prayer Breakfast just hours before his address, held up newspapers with “Acquitted” headlines mere feet from Pelosi.

The two have been sparring all week—notably Tuesday at his third State of the Union. Following his address, the speaker tore up the pages of his speech in full view of the cameras, shocking lawmakers.

“I don't like people who use their faith as justification for doing what they know is wrong, nor do I like people who say 'I pray for you' when you know that is not so," Trump said at the prayer breakfast. Pelosi had publicly said during the impeachment process that she and fellow Democrats were "prayerful" and that she prays for the president.

Following the breakfast Thursday, Pelosi fired back at Trump for his comments and his proud display of his acquittal.

“You’re impeached forever, you are never getting rid of that scar,” Pelosi declared at a press conference Thursday, even amid Trump’s victory lap.

“He shredded the truth with his speech, he’s shredding the Constitution with his conduct and I shredded his state of mind address,” she said.

He went on to thank his family and apologized to them.

"I want to apologize to my family for having to go through this phony, rotten deal," he said, calling Ivanka to the podium and giving her a hug, and welcoming Melania Trump to the stage for a kiss.

Fox News' Marisa Schultz and Gregg Re contributed to this report.