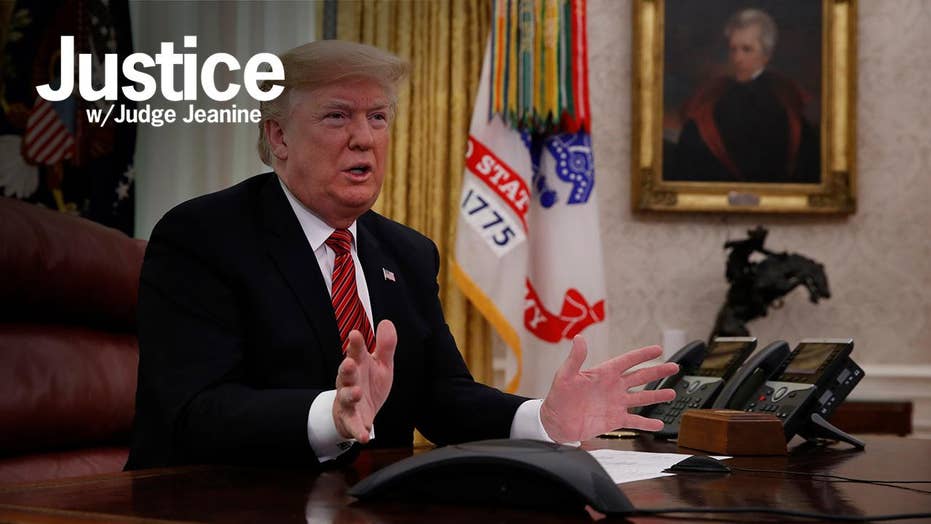 On Saturday, Judge Jeanine has an exclusive interview with President Trump by phone. They discuss everything from the crisis at the border, border security, meeting with Putin, collusion and Michael Cohen.

President Trump on Saturday night strongly denied a report that he had taken unusual steps to hide the details of his private conversation with Russian President Vladimir Putin in July 2017 in Hamburg, Germany, telling Fox News in an exclusive interview that he had followed typical protocols in the wake of other high-profile leaks of his sensitive communications with foreign leaders.

Trump's version of events about the meeting on the sidelines of the G-20 summit was seemingly backed up by former Secretary of State Rex W. Tillerson, whom Trump fired in March and who has, on occasion, publicly criticized the president.

Citing "current and former U.S. officials," The Washington Post reported that the president told interpreters not to discuss the substance of his talks with Putin and, at one point, seized an interpreter's notes. One interpreter, according to the Post, told officials that Trump had told Putin he believed his explanation that Russia had not improperly meddled in the 2016 presidential election -- contradicting Tillerson's contemporaneous statements at a press conference.

Tillerson, who has publicly and colorfully sparred with the president in recent weeks, told The Post for its article that he "was present for the entirety of the two presidents’ official bilateral meeting in Hamburg." Tillerson, despite his open criticisms of Trump in December as someone who became "frustrated" easily and who frequently needed to be reminded of the law, did not "respond" to The Post's allegations when the paper presented the claims to him.

“I would. I don’t care," Trump told "Justice with Judge Jeanine" host Jeanine Pirro, referring to disclosing details of his talks with Putin . "I had a conversation like every president does. You sit with the president of various countries. I do it with all countries. We had a great conversation. We were talking about Israel and securing Israel, and lots of other things. It was a great conversation. I'm not keeping anything under wraps. I couldn't care less."

The White House also sharply pushed back on The Post's reporting.

"The Washington Post story is so outrageously inaccurate it doesn’t even warrant a response," White House press secretary Sarah Sanders said Sunday. "The liberal media has wasted two years trying to manufacture a fake collusion scandal instead of reporting the fact that unlike President Obama, who let Russia and other foreign adversaries push America around, President Trump has actually been tough on Russia.”

Trump has described Tillerson as "dumb as a rock," writing on Twitter that he was also "lazy as hell" and claiming he couldn't "get rid of him fast enough." The Post did not explain why Tillerson had refused to respond to its reporting that Trump's version of events conflicted with what he had personally witnessed. Tillerson, 66, has said there is “no question” Russia interfered in the 2016 election, and said Russia seeks to “undermine our confidence and undermine the world’s confidence in us.

"The president pressed Putin, on multiple occasions -- Putin denied involvement, as I believe he has done in the past," Tillerson said in an off-camera briefing with Treasury Secretary Steven Mnuchin immediately following Trump's talks with Putin at the G-20 summit in Hamburg. “The two agreed this was a substantial hindrance to the ability to move the Russian, U.S. relationship forward,” Tillerson said, adding that the Syria conflict had been the primary point of discussion following a "robust" talk about Russia's involvement in purported election meddling.

Leaks have roiled the Trump administration since it took office, and the president's talks with foreign leaders and dignitaries have regularly found thier way to print. Trump was reportedly furious when The Post published complete, leaked transcripts of his private conversations with the leaders of Australia and Mexico in August 2017. Even the Post's own Jennifer Rubin called the brazen high-level leaks "frightening," noting that "it's shocking to see presidential conversations released in this way."

In May 2017, shortly before Trump's meeting with Putin in Hamburg, The Post, again citing "current and former U.S. officials," reported that the president had disclosed "highly classified" information to the Russian ambassador and foreign minister during an Oval Office meeting that month.

FORMER FBI OFFICIAL ON FBI PROBE INTO TRUMP: 'RESISTENCE IS ALIVE AND WELL'

The secretive information, which Trump had the legal authority to declassify as president, concerned a plan by ISIS terrorists that was reportedly unearthed by a U.S. intelligence asset overseas. Trump, according to The Post, disclosed the location of the city in which the asset discovered the plot, potentially endangering the source of the information.

"I think it’s the most insulting article I’ve ever had written."

In July 2018, the White House suspended the practice of releasing summaries -- known as "readouts" -- of Trump's informal calls with foreign leaders. Just months earlier, the administration announced it was banning employees and guests from using personal cellphones in the West Wing, citing security and technology concerns.

"The security and integrity of the technology systems at the White House is a top priority for the Trump administration and therefore starting next week the use of all personal devices for both guests and staff will no longer be allowed in the West Wing,” White House Press Secretary Sarah Sanders said in a statement at the time.

“Staff will be able to conduct business on their government-issued devices and continue working hard on behalf of the American people," she added.

Trump, speaking to Pirro on Saturday, asserted that political bias underlied the recent reporting about his conversations with Putin. He also unloaded in personal terms on The Washington Post and its owner, Amazon founder and billionaire Jeff Bezos, who recently announced he will divorce his wife.

Trump further derided a New York Times piece describing the FBI's decision to investigate whether he was working on behalf of Russia as the "most insulting article" ever written about him. The FBI reportedly opened the probe after Trump fired FBI Director James Comey.