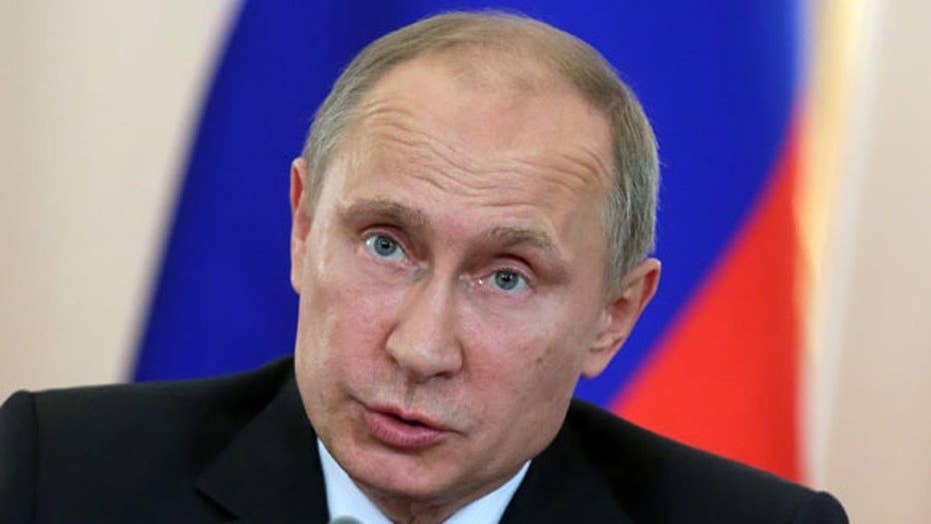 Putin says Russia will not retaliate against US sanctions

President-elect Donald Trump took to Twitter Friday to praise Russian President Vladimir Putin for not retaliating against new penalties imposed by the Obama administration for Russia's alleged interference in the U.S. election – going so far as to call Putin “very smart.”

“Great move on delay (by V. Putin) - I always knew he was very smart!” Trump tweeted.

The tweet comes after Putin announced earlier in the day that he would not kick out American diplomats despite President Obama’s announcement Thursday that his administration will expel 35 Russian intelligence operatives and close down two Russian compounds in Maryland and New York, among other actions.

Russians are playing @CNN and @NBCNews for such fools - funny to watch, they don't have a clue! @FoxNews totally gets it!

While the Russian premier condemned the sanctions imposed on his country, calling them “unfriendly,” he said he would not retaliate and was instead looking to rebuild Russian-U.S. relations with the incoming Trump administration.

"We will not expel anyone. We will not prevent their families and children from using their traditional leisure sites during the New Year's holidays. Moreover, I invite all children of U.S. diplomats accredited in Russia to the New Year and Christmas children's parties in the Kremlin," Putin added.

Trump has taken heat for not criticizing Putin, and for doubting U.S. intelligence suggesting the Russians interfered in the election to sway the vote Trump’s way. Trump called for the U.S ”to move on to bigger and better things” in a statement Thursday in response to the Obama sanctions.

The restrained response from Putin was a marked contrast from noises from the Kremlin earlier Friday, when Putin’s deputies pushed for a stronger response. Foreign Minister Sergey Lavrov called for Russia to kick out a group of U.S. diplomats, and suggested blocking the Americans from using their summer retreat on the outskirts of Moscow and a warehouse south of Moscow. Prime Minister Dmitry Medvedev charged earlier in the day that the outgoing administration has become immersed in "anti-Russian death throes."

Trump has said he is keeping an open mind on the issue, and will meet with leaders in the intelligence community next week in order to be updated on the issue.

Obama also announced Thursday that the U.S. had sanctioned the GRU and the FSB -- two of Russia's intelligence services as well as other entities and individuals associated with the GRU. The cybersecurity firm hired by the Democratic National Committee to investigate the hack of its emails earlier this year concluded the hacking came from the Fancy Bear group, believed to be affiliated with the GRU, Russia's military intelligence agency.