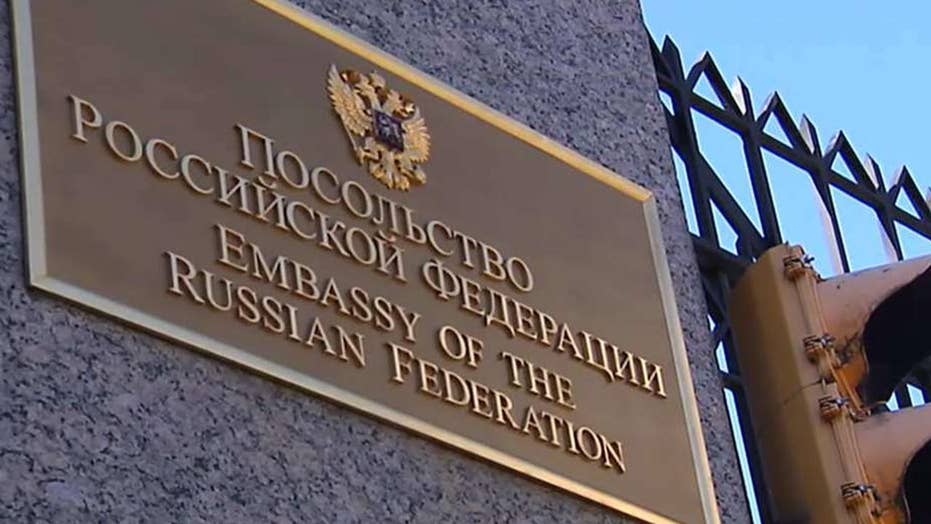 US and allies expel Russian diplomats

The unified show of condemnation is a response to the poisoning of a former Russian spy in the U.K.; the Kremlin denies. Correspondent Kevin Corke reports from the White House.

President Trump on Monday ordered the expulsion of 60 Russian intelligence officers in the United States and the closure of the Russian consulate in Seattle in response to the nerve agent attack on an ex-Russian spy in the U.K. earlier this month, senior administration officials said.

The steps, following Britain's expulsion of Russian diplomats, are meant to send a message to Moscow that actions have consequences, the officials said. The Seattle consulate is being closed because of its proximity to submarine bases, as well as Boeing.

“With these steps, the United States and our allies and partners make clear to Russia that its actions have consequences,” White House press secretary Sarah Sanders said. “The United States stands ready to cooperate to build a better relationship with Russia, but this can only happen with a change in the Russian government’s behavior.”

Former Putin target on why Russia is behind spy poisoning

Russia, which has been blamed for the attack, has denied wrongdoing. Kremlin Spokesman Dmitry Peskov vowed a reciprocal response over Monday’s expulsion, according to Russian state run media.

"We’ve said more than once and we say once again: Russia has had nothing to do with this affair whatsoever. Naturally, as before, we will proceed from the principle of reciprocity," Peskov said.

U.S. officials said a total of 60 Russians are being expelled, including 48 at the Russian embassy and 12 at the United Nations. The individuals and their families have been given seven days to leave the United States.

Officials said the president made the decision after several intelligence meetings last week, and was continuously briefed about the process over the weekend.

The administration had said it was considering a range of “options” in response to the March 4 poisoning of ex-Russian spy Sergei Skripal and his daughter. They were apparently poisoned with a Soviet-produced, military-grade nerve agent and remain unconscious and in critical condition.

"It is an assault on UK sovereignty and any such use by a state party is a clear violation of the Chemical Weapons Convention and a breach of international law. It threatens the security of us all,” they said in a joint statement.

“We obviously stand united with allies that believe in the rule of law, of a rules based order, and whether it be North Korea using a weapon of mass destruction somewhere or any other country, we are against the use of weapons of mass destruction especially when there’re violations of a treaty,” Defense Secretary Jim Mattis told reporters Monday.