Trump to nominate Barr for AG, Nauert for UN ambassador

President Trump announced Friday that he plans to nominate William Barr, the George H.W. Bush-era leader of the Justice Department, as his next attorney general – as well as State Department spokeswoman Heather Nauert to succeed outgoing U.N. Ambassador Nikki Haley.

The nominations, which had been widely expected, were confirmed by the president as he prepared to leave Washington for a conference in Missouri.

He said Barr was his “first choice from day one,” though acknowledged he didn’t know him until recently.

“Bill Barr will be nominated … I think he will serve with great distinction,” Trump said.

Fox News is told Trump liked the immense respect Barr commands and the fact that he has earned bipartisan support in the past. If confirmed, he would replace Matthew Whitaker, the former Jeff Sessions chief of staff who took over as acting attorney general last month.

Attorney General Sessions resigned at the president's request – coming after Trump lambasted Sessions in public for months over his recusal from the Russia investigation.

Barr led the Justice Department under Bush from 1991 to 1992, and currently works at the Kirkland & Ellis law firm in Washington.

According to his biography, he served in the Central Intelligence Agency from 1973 to 1977.

Democrats have cried foul ever since the appointment of Whitaker, who now oversees Special Counsel Robert Mueller’s Russia investigation, as acting attorney general. Several Democratic senators filed a lawsuit in federal court challenging the constitutionality of Whitaker’s appointment, arguing it is in violation of the Constitution’s appointments clause.

It's unclear whether Barr will garner bipartisan support given the politically charged environment, though Trump urged a swift confirmation process. 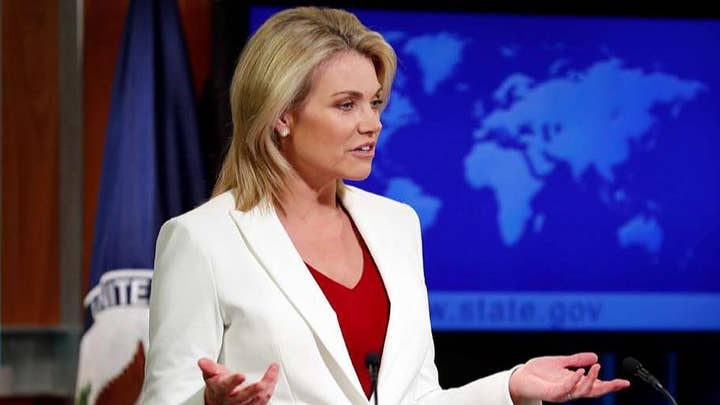 Trump, meanwhile, said Nauert will be tapped for the U.N. role, saying she’s “very talented” and predicting she’ll be “respected by all.”

The promotion would mark a rapid rise for Nauert from journalist to one of the nation’s top ambassadors in less than two years.

Nauert would face a full plate at the United Nations, with Iran and North Korea and other issues dominating the U.S. agenda there. Further, she will confront a stream of anti-U.S. and anti-Israel rhetoric at the world body -- something Haley constantly pushed back against during her tenure.

Trump’s announcement comes a day after the U.N. General Assembly failed to adopt a U.S. resolution that would have condemned terrorist attacks by Palestinian terror group Hamas.

As part of its reform effort, the Trump administration pulled the U.S. out of the controversial Human Rights Council and froze aid to the U.N. Palestinian refugee agency (UNRWA). It is expected that Nauert will continue that more combative stance toward the body.

Nauert, should she be confirmed by the Senate, will also be responsible for representing the U.S. position on the Israeli-Palestinian conflict, Libya, Syria, Yemen, South Sudan and other international conflicts and crises.

"Ms. Nauert has stood by the State of Israel in her previous positions, and I have no doubt that the cooperation between our two countries will continue to strengthen as ambassador to the U.N.," Danon said. "In the past two years, we have worked closely with Ambassador Nikki Haley to change the hostile spirit in the U.N., which has led to unprecedented achievements. Ambassador Haley will always be a true friend of the State of Israel."

Haley announced her departure in October, surprising U.N. watchers who had little indication she was planning on leaving the post. Haley will serve until January, and has not said what she intends to do after that. She has been widely floated as a future presidential candidate, though she publicly ruled out a run in 2020.

"No, I am not running in 2020," Haley told reporters during an Oval Office meeting with Trump. “I look forward to supporting the president in the next election.”

Nauert was reported to have been iced out of the State Department under former Secretary of State Rex Tillerson. The Associated Press reported earlier this year that Nauert almost quit as spokesperson several times, and told associates that she was ready to move on.

But her ascent to U.N. ambassador suggests she has cultivated better ties with Secretary of State Mike Pompeo -- who replaced Tillerson this year -- and has impressed in her role that requires quick learning and understanding of a broad range of material from across the globe.

A senior administration official told Fox News that Nauert had traveled more than 155,000 miles across 26 international trips. The overwhelming bulk of those were with Pompeo.

Many of the issues she will face in New York are those that she has already dealt with on a daily basis in Foggy Bottom.

Between March and October, she served as acting undersecretary for Public Diplomacy and Public Affairs, which involved overseeing public diplomacy in Washington and all of the approximately 275 U.S. embassies, consulates and other posts. She was also in charge of the Global Engagement Center -- which fights extremist messaging from Islamic terror groups such as the Islamic State (ISIS).

Before she worked at the State Department, Nauert worked as an anchor and correspondent at Fox News -- including as a breaking news anchor on “Fox & Friends.” Before Fox, she was a reporter at ABC News. She moved to the State Department in April 2017.

If confirmed, she would join a line of former journalists who have gone on to represent the U.S. at the United Nations. Former Ambassadors Samantha Power (2013-17), John Scali, (1973-75) and James Russell Wiggins (1968-69) were all journalists in various capacities before becoming U.N. ambassador.