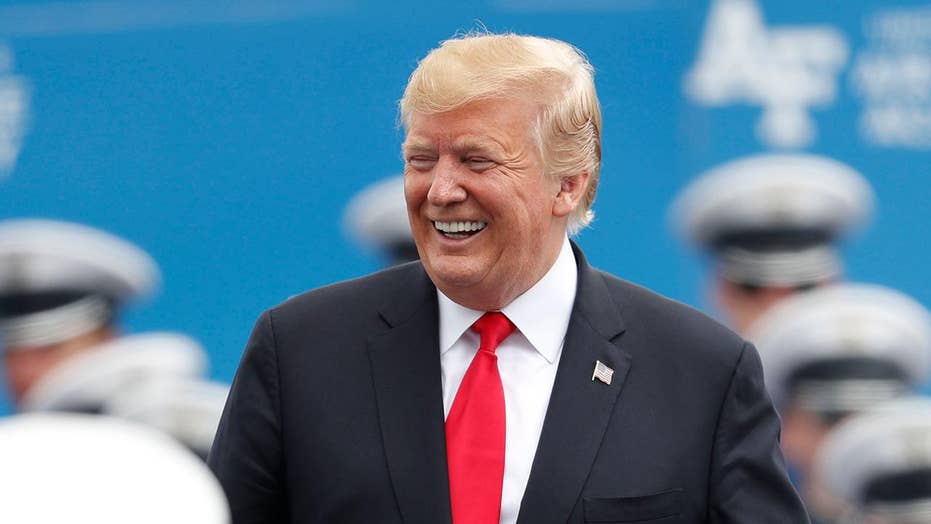 Trump says US will impose tariffs on Mexican goods

President Trump on Thursday abruptly announced a new 5 percent tariff on Mexico beginning in early June, saying the levy will "gradually increase" until the ongoing illegal immigration surge at the southern border is "remedied" and illegal migrants "STOP."

It was not immediately clear whether the measure would have the necessary support in Congress, where a two-thirds vote of each chamber would be sufficient to kill the new policy and override any potential presidential veto. Republicans sounded the alarm about the potential impacts of the tariffs on farmers and blue-collar workers.

"On June 10th, the United States will impose a 5% Tariff on all goods coming into our Country from Mexico, until such time as illegal migrants coming through Mexico, and into our Country, STOP," Trump wrote. "The Tariff will gradually increase until the Illegal Immigration problem is remedied, ... ..at which time the Tariffs will be removed. Details from the White House to follow."

Fox News is told the tariff on all goods by land, sea, and air from Mexico will hike to 10 percent on July 1 -- and potentially increase substantially from there.

The statement added: "Thousands of innocent lives are taken every year as a result of this lawless chaos.  It must end NOW! ... Mexico’s passive cooperation in allowing this mass incursion constitutes an emergency and extraordinary threat to the national security and economy of the United States."

Specifically, White House sources told Fox News that Mexico would need to step up security efforts on the border, target transnational smugglers, crack down on illicit bus lines and align with the U.S. on a workable asylum policy. Mexico could use certain so-called choke points on the southern border to curb illegal migration sharply, according to the sources.

The Washington Post reported earlier in the day that the Trump administration was considering the move, and that it had broad support in the White House -- although some aides reportedly tried to talk Trump out of it.

“We are going to do something very dramatic on the border because people are coming into our country," Trump told reporters earlier Thursday.

The International Emergency Economic Powers Act of 1977 permits tariffs to be levied by the executive in the event of a national emergency originating from a foreign source. Trump said he was invoking the powers in the law and would use his "sole discretion" to determine whether Mexico had taken sufficient action.

"If Mexico does not take decisive measures, it will come at a significant price," Trump concluded in his statement.

The situation could complicate the legislative passage of the United States-Mexico-Canada Agreement (USMCA), sent to Congress by the White House on Thursday, which has aimed broadly to limit tariffs among the three countries.

However, the White House told Fox News it saw the matters as entirely distinct and did not anticipate complications for the USMCA.

Migrants seeking asylum in the United States lining up for meals provided by volunteers near the international bridge in Matamoros, Mexico. (AP Photo/Eric Gay, File)

Vice President Mike Pence was in the Canadian capital of Ottawa on Thursday to build support for the USMCA. The U.S. recently lifted steel and aluminum tariffs on Canada that had threatened to sink the arrangement, which was signed in November with the goal of replacing the North American Free Trade Agreement.

The news of the tariff came hours after Politico reported that an internal plan under consideration at the Department of Homeland Security effectively would block Central American migrants from bringing asylum claims, by prohibiting claims from applicants who resided in a country other than their own before seeking entry to the United States.

Arrests along the southern border have skyrocketed in recent months, with border agents making more than 100,000 arrests or denials of entry in March, a 12-year high. Immigration courts that process asylum claims currently have faced a backlog of more than 800,000 cases and asylum applicants increasingly have been staying in the U.S. even after their claims for asylum have been denied.

More than 4,000 individuals have been apprehended at the border with children who are not their own in recent months, administration officials tell Fox News.

And, Customs and Border Protection said it apprehended or turned away over 109,000 migrants attempting to cross the border in April, the second month in a row the number has topped 100,000.

In a dramatic moment, more than 1,000 illegal immigrants were apprehended by border agents near the U.S.-Mexico border early Wednesday -- the largest ever group of migrants ever apprehended at a single time, sources told Fox News on Thursday. The group of 1,036 illegal immigrants found in the El Paso sector included migrants from Guatemala, El Salvador and Honduras, according to sources. 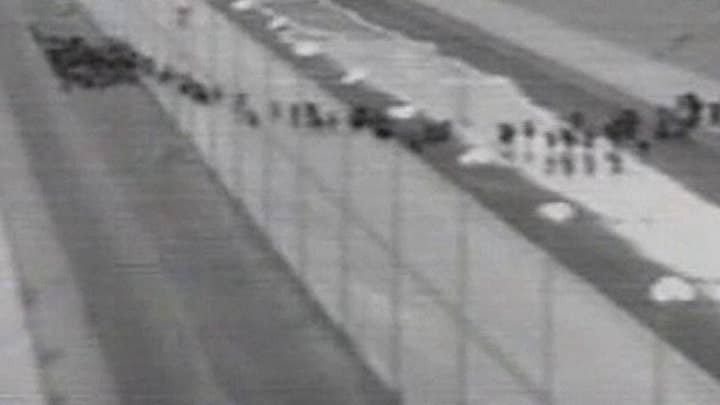 Trump tweeted a video of the episode on Thursday, with the note: “Democrats need to stand by our incredible Border Patrol and finally fix the loopholes at our Border!”

A top Border Patrol official told lawmakers in April that authorities have apprehended more families illegally crossing the border between October 2018 and February of this year than during all of the 2018 fiscal year (Oct. 1, 2017-Sept. 30, 2018).