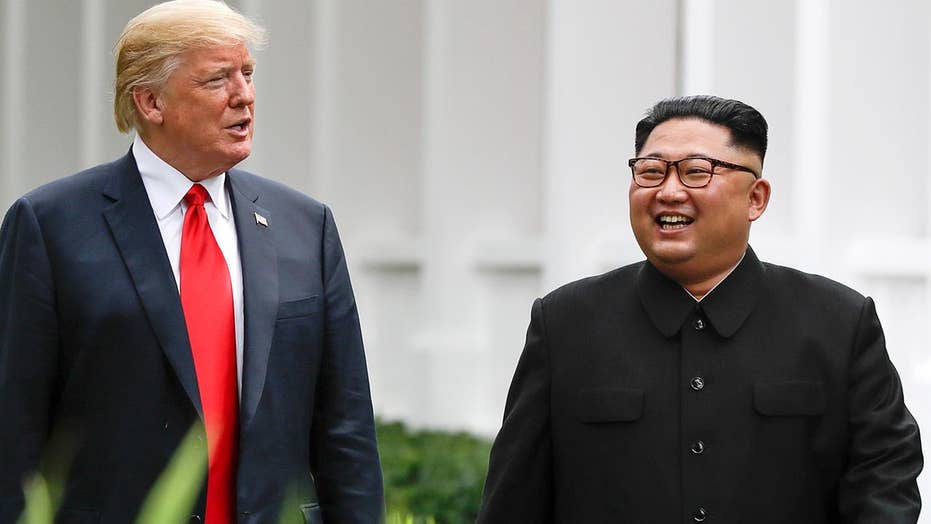 President Trump landed Tuesday in Vietnam for his crucial summit with North Korean leader Kim Jong Un -- the president's second meeting as part of a bold push to rein in Pyongyang's nuclear ambitions.

“Looking forward to a very productive Summit,” Trump tweeted on Monday before boarding Air Force One.

Trump landed in Hanoi hours after Kim arrived by armored train. The summit will take place later this week. Officials in Hanoi told The Associated Press that they only had about 10 days to prepare, but promised airtight security for the two leaders.

But the chaotic preparations included the White House press corps being shifted to a new hotel before Kim arrived. Kim subsequently toured parts of Hanoi, where locals stood behind barriers to catch a glimpse of the leader of the hermit kingdom.

Trump has repeatedly hailed his meeting with Kim in Singapore last June as a success, although there were few concrete outcomes from the summit.

North Korea initially turned over 55 boxes of presumed remains of U.S. soldiers killed in the Korean War as part of the agreement from the summit, although it has not yet followed through with returning additional remains.

North Korea also pledged to work “toward” complete denuclearization, something critics say the communist regime has not adequately honored either.

Secretary of State Mike Pompeo this month said that he was hoping for a “substantive step forward” but cautioned that “it may not happen, but I hope that it will.”

"President Trump has also said this is going to take time. There may have to be another summit. We may not get everything done this week," Pompeo said.

Pompeo said he hoped to put a "road map" in place, but would not discuss the possibility of declaring a formal end to the Korean War or pulling some American troops from South Korea, in keeping with his stand against publicly discussing the issue that could arise during the negotiations.

But Fox News is told that the White House, State Department, Defense Department, Treasury Department and Energy Department are concerned about where Special Envoy to North Korea Stephen Biegun is moving with negotiations -- and that he is "getting too far over his skis."