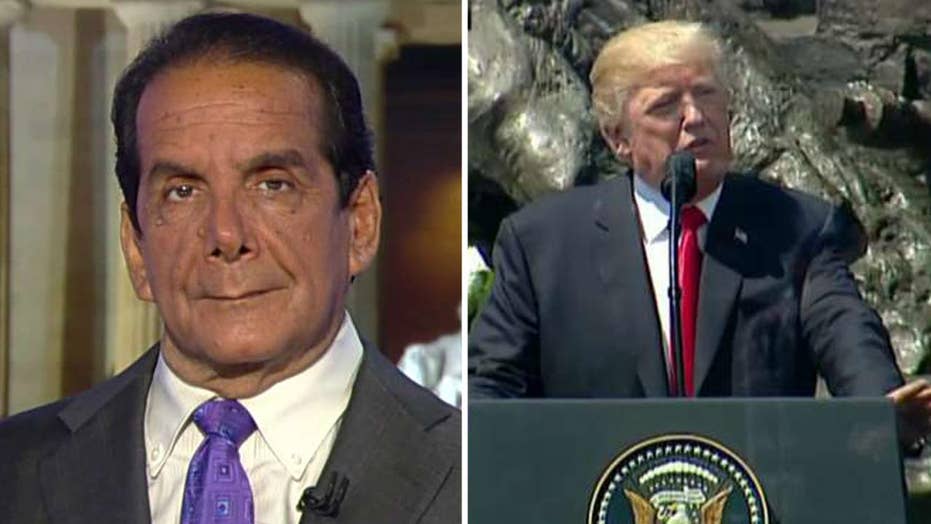 Fox News contributor and syndicated columnist say President Trump's strong defense of Western values on the world stage during speech in Poland was the antithesis of his inaugural address, most anti-Russia since Reagan

President Trump delivered a staunch defense of Western values during a rousing speech Thursday to thousands of Poles in Warsaw’s Krasinski Square, rallying allies against what he described as “dire threats” to civilization and vowing, “the West will never, ever be broken.”

On his second overseas trip as president, Trump voiced confidence in the resolve of Western nations to confront common threats but said allies must remember who they are to topple those challenges. Trump said nations must have the will to protect borders and preserve civilization from those who would destroy it.

“Just as Poland cannot be broken, I declare today for the world to hear that the West will never, ever be broken,” Trump said. “Our values will prevail, our people will thrive and our civilization will triumph.”

In sweeping terms, Trump used the address to cheer the contributions of Western societies, as the enthusiastic crowd frequently broke out in applause and chants of “USA” and “Donald Trump.”

“We write symphonies, we pursue innovation. … We reward brilliance. We strive for excellence, and cherish inspiring works of art that honor God,” the U.S. president said. “We treasure the rule of law and protect the right to free speech and free expression. … We debate everything, we challenge everything, we seek to know everything so that we can better know ourselves.”

Following his speech, Trump flew to Germany where he will meet Thursday with German Chancellor Angela Merkel. His highest profile meeting will be on Friday with Russian President Vladamir Putin on the sidelines of the G-20 summit.

In his speech, Trump saluted Polish sacrifice and underscored the United States’ commitment to NATO, Poland and Western values.

“In the Polish people, we see the soul of Europe -- your nation is great because your spirit is great and your spirit is strong,” Trump said, calling Poland the “geographic heart of Europe.”

Trump reflected on historic invasions of Poland by the Soviet Union and Nazi Germany, saying that while Poland’s borders were “erased from the maps,” it could “never be erased from your hearts.”

“The story of Poland is a story of people who have never lost hope, never been broken and never, ever, forgotten who they are.”

Trump applauded Poland for being one of the NATO countries that has “actually achieved a benchmark for investment.”

“My administration has demanded that all members of NATO finally meet their full and fair financial obligation -- as a result of insistence, billions of dollars have begun to poor into NATO,” Trump said. “In fact, people are shocked.”

Trump endorsed Article 5, the collective defense provision that holds an attack on one ally nation is considered an attack on all allies.

“There are dire threats to our security and to our way of life -- you see what’s happening out there -- they are threats,” Trump said. “We will confront them and we will win -- but they are threats.”

The president underscored the severity of the threat of “radical Islamic terror” -- the president did not use that term in his keynote address in Saudi Arabia before leaders of more than 50 Muslim nations.

“We are fighting hard against radical Islamic terrorism and we will prevail,” Trump said, acknowledging that the U.S. and Europe have seen “one terror attack after another.”

He added: “While we will always welcome new citizens who share our values and love our people, our borders will always be closed to terrorism and extremism of any kind.”

The question president Trump raised was not “if” the West could survive, but whether the West “has the will to survive.”

“Do we have the confidence in our values to defend them at any cost? Do we have the desire and courage to preserve our civilization in the face of those who subvert and destroy it?” Trump asked. “If we don’t have strong families and strong values, we will be weak, and we will not survive.”

Trump also took a swipe at “the steady creep of government bureaucracy,” which he said is an “invisible” danger “on both sides of the Atlantic.”

“We must work together to confront forces whether they come from inside or out, south or east, that threaten to undermine these values and erase the bonds of culture, faith and tradition that makes us who we are,” Trump said. “These forces are doomed to fail if we want them to fail, and we do indeed want them to fail.”