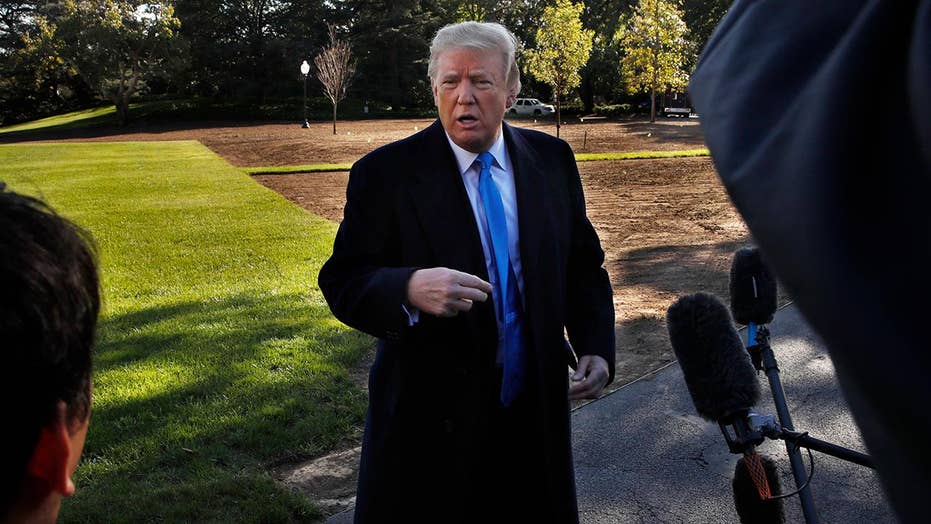 President Trump said Monday he is “immediately” sending Secretary of State Mike Pompeo to Saudi Arabia to meet with King Salman to discuss the disappearance of Saudi activist Jamal Khashoggi.

“Just spoke to the King of Saudi Arabia who denies any knowledge of whatever may have happened ‘to our Saudi Arabian citizen.’ He said that they are working closely with Turkey to find answer. I am immediately sending our Secretary of State to meet with King!” Trump tweeted Monday morning.

Speaking to reporters before leaving Washington to tour hurricane damage in Florida, Trump vowed, "We are going to leave nothing uncovered."

But he also noted the Saudi king strongly denied knowledge, while suggesting the possibility of outside involvement.

Khashoggi, a contributor to The Washington Post, was last seen nearly two weeks ago. Turkish officials say they believe Khashoggi was killed inside his country’s consulate in Istanbul after he visited to obtain a document required to marry his Turkish fiancée. Saudia Arabia has denied the allegations and dismissed them as “baseless.”

Trump was asked in an interview on CBS News’ “60 Minutes” Sunday whether he thought the Saudis murdered Khashoggi and did not rule out the possibility.

“Nobody knows yet, but we’ll probably be able to find out. It’s being investigated. It’s being looked at very, very strongly. And we would be very upset and angry if that were the case,” Trump explained. “As of this moment, they deny it. And deny it vehemently. Could it be them? Yes.”

Trump added: “There’s a lot at stake. And maybe especially so because this man was a reporter. There’s something—you’ll be surprised to hear me say that. There’s something really terrible and disgusting about that, if that were the case.”

Trump said the U.S. would “get to the bottom of it” and noted there would be “severe punishment” for the Saudis if evidence proved they were involved in the murder of Khashoggi.

Turkish media have published images from Oct. 2 of an alleged 15-member Saudi “assassination squad” and video of suspicious movements at the Saudi consulate in Istanbul after Khashoggi’s disappearance.

Several Republicans and Democrats on the Foreign Relations Committee sent a letter to Trump requesting he “make a determination on the imposition of sanctions … with respect to any foreign person responsible for such a violation related to Mr. Khashoggi.”  The letter triggered an investigation under the Global Magnitsky Human Rights Accountability Act. That requires the administration to sanction those found responsible of a gross violation of human rights against someone exercising freedom of expression.

The Saudis pushed back, warning that the Kingdom would “respond with greater action” should any sanctions or political decisions be made based on the “false accusations.”

“The Kingdom affirms its total rejection of any threats and attempts to undermine it, whether by waving economic sanctions, using political pressure, or repeating false accusations,” the country said in a statement released by the Saudi Press Agency. “The Kingdom also affirms that if it receives any action, it will respond with greater action, [and] that the Kingdom’s economy has an influential and vital role in the global economy.”

“We don’t know the facts of this case just yet. So I think they’re getting ahead of themselves at this point,” said Heather Nauert, the State Department’s spokesperson. “We will watch the situation very carefully, very closely, wait for the facts to come out, and then we’ll get there.”

Fox News’ Adam Shaw and Rich Edson and The Associated Press contributed to this report.