President Trump on Saturday will head to Tulsa, Oklahoma to address what is likely to be a packed rally of supporters -- despite objections from local officials about the potential spread of the coronavirus, and fears that violence could break out as protesters as well as supporters flock to the event.

The rally is the first since the coronavirus pandemic shut down much of the country in March, and is predicted to pack the 19,000 capacity BOK Center.

Trump supporters have been lining up for days to secure their seat at the event and the Trump campaign touted Monday receiving over 1 million ticket requests.

MCENANY HITS MEDIA FOR HEALTH CONCERNS OVER RALLY: 'YOU SHOULD EXHIBIT THAT SAME CONCERN FOR THE PROTESTERS'

Supporters of U.S. President Donald Trump gather to attend a campaign rally at the BOK Center, June 20, 2020 in Tulsa, Oklahoma. Trump is scheduled to hold his first political rally since the start of the coronavirus pandemic at the BOK Center on Saturday while infection rates in the state of Oklahoma continue to rise. (Getty)

Trump also plans an outdoor event, and officials are expecting about 100,000 people to converge on the city.

It comes at a time when Trump’s campaign would welcome a shot in the arm. With the U.S. rocked by the coronavirus outbreak, an economic downturn and recent riots and protests over the death of George Floyd, Trump’s polling numbers have taken a hit, and many give Democratic opponent Joe Biden a double digit lead over Trump.

But the rally has raised concerns that it could be a “super spreader” event for coronavirus, taking place in an indoor arena. The Trump campaign has said it intends to conduct temperature checks, distribute hand sanitizer and hand out masks, but a lawsuit this week tried to make masks mandatory and force attendees to keep a six-foot distance from each other. Oklahoma’s Supreme Court ruled against it on Friday.

People wait at a security checkpoint to attend a rally with US President Donald Trump later in the evening at the BOK Center on June 20, 2020, in Tulsa, Oklahoma. - Hundreds of supporters lined up early for Donald Trump's first political rally in months, saying the risk of contracting COVID-19 in a big, packed arena would not keep them from hearing the president's campaign message.  (AFP via Getty)

Trump officials have also alleged a double standard from critics in the media and elsewhere, noting that many of those same critics have either been silent or outright celebrated recent protests in response to the death of George Floyd.

"While we appreciate the great concern for our rally goers, you should exhibit that same concern for the protesters who are out there not socially distancing in many cases,” White House Press Secretary Kayleigh McEnany told reporters at the White House on Friday.

Some reporters noted that the Saturday rally was indoors, and the virus is generally seen as more likely to spread indoors than outdoors.

"It’s our position that the media should not be making decisions about their guidelines to us about social distancing based on political ideology or what they think is the worthiness of the cause," she said. 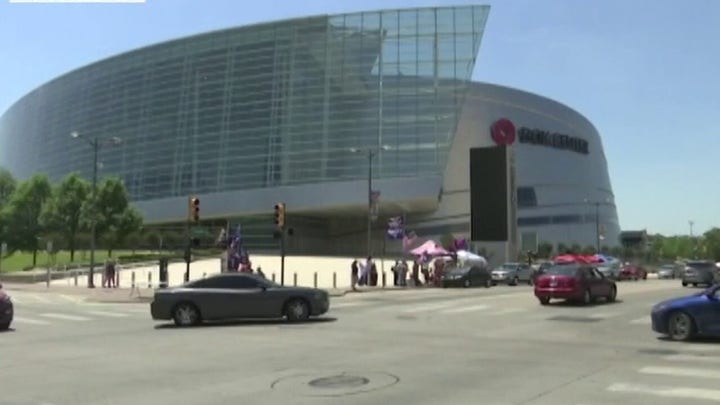 Saturday’s rally was originally scheduled for Friday. That day is also known as Juneteenth, the holiday that marks the end of slavery in the United States. Trump announced last week that it would be shifted forward a day.

Rev. Al Sharpton was one of those who gathered for a Juneteenth celebration in the city on Friday, and he challenged Trump on remarks he made referring to fears of violent protests. Trump had warned “any protesters, anarchists, agitators, looters or lowlifes who are going to Oklahoma, please understand, you will not be treated like you have been in New York, Seattle or Minneapolis.”

“It’s lowlifes that shoot unarmed people, Mr. President,” Sharpton said. “You couldn’t be talking about us. Because we fought for the country when it wouldn’t fight for us.”

The Rev. Al Sharpton addresses the crowd at a Juneteenth rally in Tulsa, Okla., Friday, June 19, 2020, the day before Trump's rally (AP)

Mayor G.T. Bynum had declared a civil emergency and announced a curfew near the arena amid fears of protesters from out of state coming to the rally and acting violently.

Bynum had announced “in the interest of national security” he would establish a “federal exclusion zone” in the vicinity of the rally. He cited “crowds in excess of 100,000” and opposition protests as well as recent “civil unrest.”

He also warned that he had information that organized groups known for violence were traveling to the city “for the purposes of causing unrest in and around the rally.”

But on Friday evening, Trump announced that the curfew had been lifted, and the mayor soon confirmed the news.

"Last night, I enacted a curfew at the request of Tulsa Police Chief Wendell Franklin, following consultation with the United States Secret Service based on intelligence they had received,” he said in a news release, the Tulsa World reported. “Today, we were told the curfew is no longer necessary so I am rescinding it.”