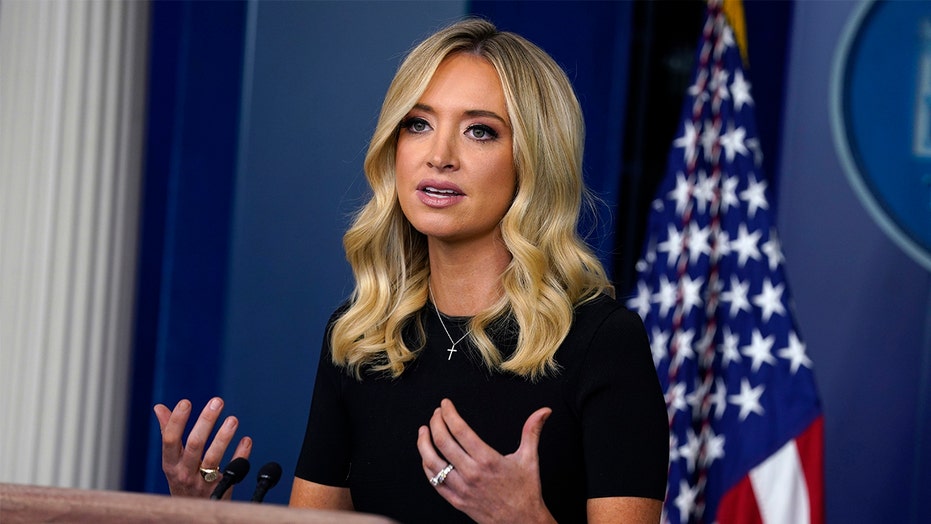 White House press secretary Kayleigh McEnany faced a barrage of questions from the media on Wednesday over coronavirus concerns ahead of President Trump’s rally in Tulsa, Okla., on Saturday -- but the Trump aide pushed back by asking why they didn't express similar sentiments about the mass protests across the country.

McEnany said that temperature checks, hand sanitizer and masks would be doled out at the Tulsa rally.

One reporter noted that while the protests took place outside, Trump’s rally is scheduled at an indoor venue, asking if it was the White House’s position that indoor and outdoor events carried equal risk.

"It’s our position that the media should not be making decisions about their guidelines to us about social distancing based on political ideology or what they think is the worthiness of the cause," she said.

McEnany held up a New York Post front page with an image of thousands gathering in close proximity for a “black trans lives matter” protest and an image from a Trump rally, blasting the “sick hypocrisy.” “This is okay,” the protest photo was captioned. “This is dangerous,” the Trump rally caption read.

Later when pressed again, McEnany noted that rally attendance was voluntary and attendees were aware of the risk they assumed.

The Trump campaign touted Monday receiving over 1 million ticket requests for the president's first rally since the start of the coronavirus pandemic in early March.

Vice President Mike Pence suggested that after the overwhelming response, the White House was looking at "another venue" and "outdoor activities."

Saturday’s rally is being held at Tulsa’s BOK Center, an indoor arena that can hold around 20,000 people -- and the campaign plans to fill the venue to capacity.

WHITMER TO EXTEND MICHIGAN'S STATE OF EMERGENCY AMID CORONAVIRUS

Saturday’s rally was originally scheduled for Friday, June 19. That day is also known as Juneteenth, the holiday that marks the end of slavery in the United States. But the president and his campaign quickly faced a chorus of criticism over the date, with the nation facing unrest sparked by the death of Minneapolis man George Floyd while in police custody.

The president was also criticized for holding a rally on Juneteenth in Tulsa, which was the site of 1921 massacre where roughly 300 black Americans were killed.

As the calls to change the date of the rally grew louder, the campaign relented, moving the event back a day.

"Many of my African-American friends and supporters have reached out to suggest that we consider changing the date out of respect for the Holiday and in observance of this important occasion and all that it represents," the president wrote in a tweet this past weekend. "I therefore decided to move our rally to Saturday, June 20th, in order to honor their requests."