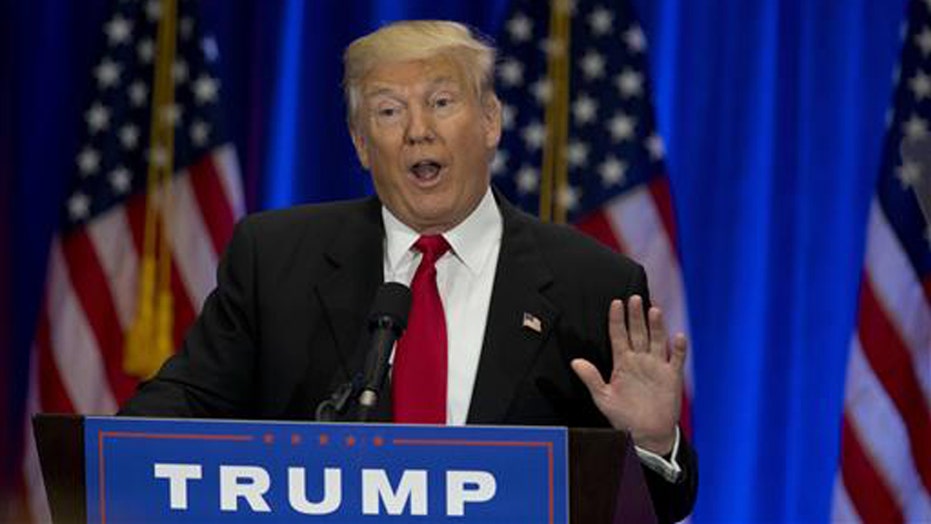 Donald Trump delivered a blistering attack Wednesday on Hillary Clinton's record as secretary of state, accusing the presumptive Democratic presidential nominee of milking oppressive regimes of tens of millions of dollars to benefit the Clinton Foundation -- while sleeping through her own "3 a.m. phone call" as terrorists were murdering four Americans in Libya, including Ambassador Chris Stevens.

Speaking at his New York City hotel, Trump said Clinton “perfected the politics of personal profit” and “doesn’t have the temperament ... or the judgment to be president.”

He specifically took her and Bill Clinton to task for taking millions from Saudi Arabia and other countries that criminalize homosexuality. Trump suggested Clinton as president would be influenced by all the lobbyists, CEOs and foreign governments who paid the Clintons to give speeches over the years.

"They totally own her and that will never, ever change," he said.

Trump called her a "world-class liar" and said "God help us" if she's elected president.

The address served as a counterattack to Clinton’s speech a day earlier in which she warned that Trump would send the country’s economy into another recession.

Trump also made an early appeal to Bernie Sanders’ supporters, saying he would be able to understand their frustration with politics and a “rigged process.”

“The insiders wrote the rules of the game to keep themselves in power and in the money,” Trump said. “That’s why we’re asking Bernie Sanders’ voters to join our movement so together we can fix the system for all Americans. Importantly, this includes fixing all of our many disastrous trade deals.”

Trump also took aim at Clinton on trade, and argued that her foreign policy is in part responsible for the creation of the Islamic State terrorist group.

“The Hillary Clinton foreign policy has cost America thousands of lives and trillions of dollars – and unleashed ISIS across the world,” Trump said. “No secretary of state has been more wrong, more often and in more places than Hillary Clinton. Her decisions spread death, destruction and terrorism everywhere she touched.”

Trump hit Clinton hard on her handling of the attack on the U.S. Consulate in Benghazi, Libya on Sept. 11, 2012 that led to the death of four Americans, including Stevens.

“He was left helpless to die as Hillary Clinton soundly slept in her bed -- that's right, when the phone rang at 3 o'clock in the morning, she was sleeping,” Trump said. “Ambassador Stevens and his staff in Libya made hundreds of requests for security. Hillary Clinton’s State Department refused them all. She started the war that put him in Libya, denied him the security he asked for, then left him there to die.”

He added, “To cover her tracks, Hillary lied about a video being the cause of his death.

He accused Clinton of taking $25 million from Saudi Arabia, “where being gay is also punishable by death.”

He added that she “took millions from Kuwait, Qatar, Oman and many other countries that horribly abuse women and LGBT citizens.”

The Trump campaign is hoping his speech will resonate with Republicans who may still be on the fence regarding Trump’s White House run. The plan is to get Republicans to focus their ire on Clinton.

Clinton, during a rally in Raleigh, N.C., later Wednesday, stuck mostly to policy but reiterated her earlier criticism of her GOP rival: “Donald Trump offers no real solutions for the economic challenges we face. He just continues to spout reckless ideas that will run up our debt and cause another economic crash."

On Monday, the New York businessman fired his campaign manager Corey Lewandowski, just hours before a new fundraising report showed that Trump had only $1.3 million in the bank at the start of June – a sign some say that shows Republicans aren’t ready to rally behind Trump just yet.

Trump’s polling numbers have also slid somewhat following comments he made claiming a federal judge overseeing the Trump University case is biased because of his Mexican heritage.