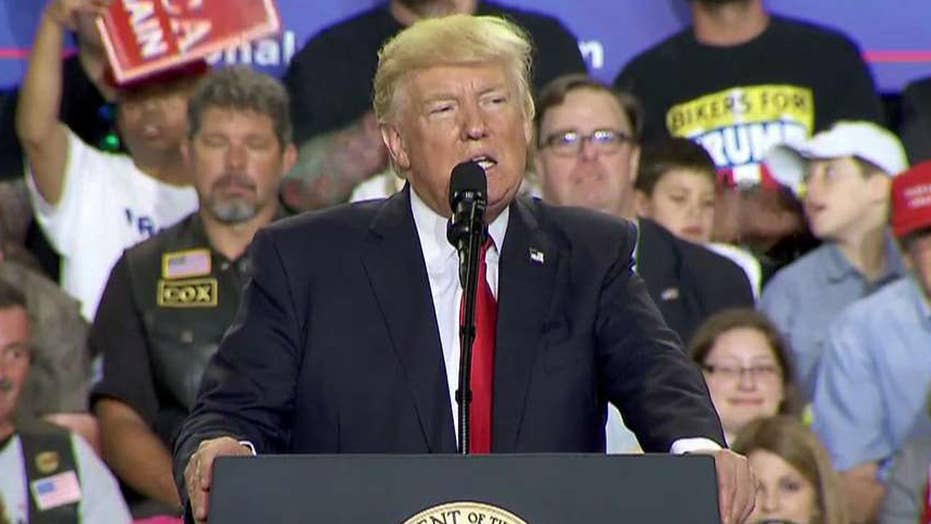 President Trump said Sunday that Americans with pre-existing medical conditions will be covered under Republicans’ new ObamaCare overhaul, as House GOP leaders try to pass the measure as early as this week.

“Health care plan is on its way,” Trump tweeted. “Will have much lower premiums & deductibles while at the same time taking care of pre-existing conditions!”

100 DAYS OF DISRUPTION: HOW TRUMP REWROTE THE PRESIDENTIAL SCRIPT

Trump’s tweet came several hours after he told CBS’ “Face the Nation” that the measure has a clause that “guarantees" people with pre-existing conditions will be covered and that it will lower the cost of ObamaCare insurance premiums.

However, House Republicans’ latest overhaul plan appears to allow states not to include the pre-existing requirement in standard ObamaCare insurance policies, under certain circumstances.

The White House appeared eager last week to get the House to approve the measure, allowing Trump to tally a major legislative achievement during his first 100 days in office, which concluded Saturday.

But House Speaker Paul Ryan, R-Wis., and his leadership team were more intent upon passing a spending bill to avert a partial government shutdown by midnight Friday.

Whether Ryan can pass a bill this week remains uncertain, considering the spending bill passed last week kept the government fully operational for just one additional week. And support for the plan from rank-and-file House Republicans appears tepid.

Ryan would need 217 yes votes from the chamber’s 238 Republicans, with about 17 purportedly in opposition. (No Democrats have supported the effort to repeal former President Barack Obama’s signature health care law.)

An amendment last week by New Jersey GOP Rep. Tom McArthur appeared to be a breakthrough in garnering support from moderate House Republicans and members of the chamber’s ultra conservative House Freedom Caucus.

However, no vote was scheduled.

“We’re going to get this damn thing passed quickly,” Trump said Saturday night at a rally in Harrisburg, Pa.

“He couldn't do it, twice,” said the New York Democrat, while saying that his party will work with Trump to improve ObamaCare if Republicans “back off” a full repeal of the 2010 health care law.