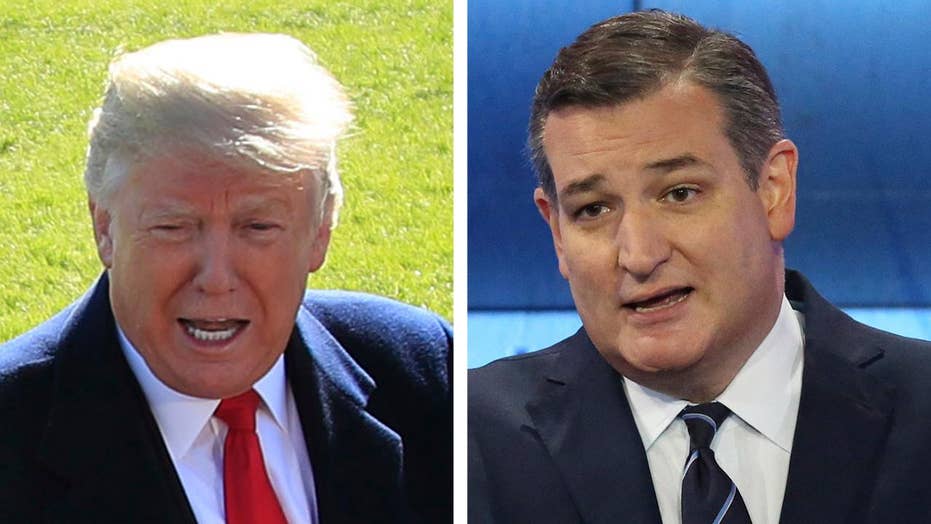 President Trump discusses Senator Ted Cruz as he departs the White House for a MAGA rally in Houston, Texas.

President Trump, who is set to hold a rally for his onetime bitter rival, Texas Republican Sen. Ted Cruz, in Houston Monday evening, also made clear that the two have ended their feud ― and the president has a few new nicknames for the senator.

Asked about recent comments by Cruz’s rival, Texas Rep. Beto O’Rourke, that Trump had been accurate when he called Cruz “Lyin’ Ted,” the president shot back immediately. “I think Beto O’Rourke is highly overrated,” Trump said. “When I heard about him, I thought he must be something special. He’s not.”

He continued: “He’s not Lyin’ Ted anymore. He’s ‘Beautiful Ted.’” Then, as reporters quizzically repeated that moniker, Trump added quickly: ”I call him 'Texas Ted.' ... He’s a very smart guy. He loves the people of Texas.”

Asked whether he regretted suggesting that Cruz’s father had helped assassinate President John F. Kennedy, Trump replied: “I don’t regret anything, honestly. It all worked out, very nicely.”

Trump promised he would come to Texas after the Senate race grew closer than expected, with O’Rourke out-fundraising Cruz and drawing large and enthusiastic crowds around the state.

No Democrat has won a statewide race in Texas since 1994, and O’Rourke’s campaign raised $38.1 million in the third quarter ― tripling the amount Cruz collected.

Closing in on Election Day, Trump tweeted Monday morning: “Big Night In Texas!!!!” In recent weeks, Trump has attacked O’Rourke on Twitter as a “total lightweight” and a “flake,” while stressing that Cruz “has long had my Strong Endorsement.”

Cruz, who is leading O’Rourke in the polls, said over the summer that he would welcome Trump’s support, though he has brushed off any suggestion he’d need Trump to win.

While Trump will promote Cruz and other Texas Republicans, Texas also will provide a backdrop for the president’s invigorated immigration rhetoric.

The “amoral bully” is ready to campaign for the “dishonest politician” as President Donald Trump holds a Houston rally for Sen. Ted Cruz on Monday. (AP, File)

Although political relationships tend to be fluid, Trump’s appearance for Cruz is notable, given that the two were bitter enemies during the 2016 primaries. After Trump insulted Cruz’s wife and father, and Cruz refused to endorse Trump at the Republican convention, it was far from clear that the two would ever put it all behind them.

EX-CLINTON ADVISER SAYS IT'S OK TO CONFRONT REPUBLICANS IN PUBLIC

But, they started rebuilding in the closing days of the campaign and have worked together since Trump took the White House.

Cruz gave back as good as he got. He savaged Trump as a “pathological liar,” an “amoral bully” and a “sniveling coward.” After Cruz lost the primary, he gave a speech at the Republican National Convention in which he did not endorse Trump and instead called on Republicans to “vote your conscience,” drawing boos from the crowd. But he announced his support about a month before Election Day — and won points in Trump’s camp for not withdrawing after the “Access Hollywood” tape was released in which Trump bragged about groping women.

Since Trump took office, Cruz and his wife have dined at the White House, and Cruz has said his office is in regular touch with the White House on policy. Still, in an interview aired over the weekend on ABC News, he dodged a question on whether the two were friends or foes.