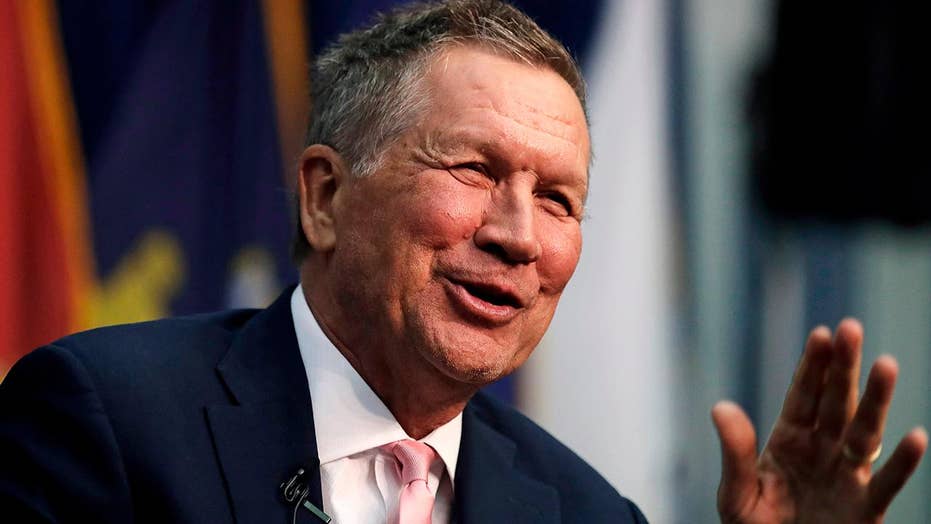 Candidates from both parties vie for Kasich seat

Ohio's incumbent governor is term-limited and that has Democrats and Republicans battling for a shot at control; Peter Doocy reports from Columbus.

MANCHESTER, N.H. – When it comes to running for the White House in 2020, John Kasich says “I really don’t know what I’m going to do.”

But in an interview with Fox News, the term-limited Ohio governor and 2016 Republican presidential candidate also shared that when it comes to another White House bid, “all the options are on the table.”

Kasich was interviewed Thursday morning, halfway through a jam-packed 24-hour visit to New Hampshire, the state that traditionally holds the first primary in the race for president.

The trip is fueling more speculation that Kasich – who finished second to Donald Trump in New Hampshire’s Republican primary -- is seriously considering challenging the president for the party’s 2020 nomination.

“I don’t have a timetable. I don’t announce timetables because I don’t know. I have to see what the situation is and whether I could really have an impact. I don’t want to waste anybody’s time if there’s not a clear path to having a major impact,” Kasich explained.

Kasich said he doesn’t have a burning desire to be president but rather “I have a burning desire to make a difference for our country and for people. To get people to understand that they’re special, that they’re unique. That they have a destiny and they need to find it. That matters to me more than seeking political office. I’ve been in political office for a long time.”

The vocal Trump critic said he’s “unhappy with the fact that it seems that the Republican Party has been hijacked” by the president.

And looking to last week’s midterm election results, where the GOP held their majority in the Senate but lost their House majority, Kasich said “my observation was that when you lose young people, minorities, women, college educated people, as a party, you’ve got a problem. It turns out that’s exactly what happened. It was driven largely the rhetoric of the president.”

And he emphasized that “what happened in this election was people rejected his behavior.”

Kasich kicked off his second trip to New Hampshire this year with a dinner Wednesday night with top Granite State supporters from his 2016 presidential campaign.

On Thursday the Ohio governor met with Saint Anselm College students and faculty at the New Hampshire Institute of Politics, a must stop for any White House hopeful. Later he pow-wowed with a larger group of supporters at a gathering Concord.

He’ll end his visit with a short speech and question and answer session in a town-hall like setting as he headlines the Nackey S. Loeb School of Communications 16th annual First Amendment Wards gala. The event honors New Hampshire residents and organizations that work to protect free speech and free press.

Kasich’s second place finish in the 2016 New Hampshire Republican primary energized the one time longshot for the nomination into a potential contender. But in the ensuing months, the only primary he was able to win was in his home state.

Kasich camped out in New Hampshire in the months leading up to the primary, making friends in the state as he held over 100 town halls, took part in dozens of forums, and headlined a slew of house parties and meet and greets.

While he’s not running for anything at the point, Kasich appears to want to keep his New Hampshire friends and assets viable.