“Rep. Adam Schiff fraudulently read to Congress, with millions of people watching, a version of my conversation with the President of Ukraine that doesn’t exist. He was supposedly reading the exact transcribed version of the call, but he completely changed the words to make it sound horrible, and me sound guilty,” he tweeted.

He continued, “Adam Schiff therefore lied to Congress and attempted to defraud the American Public. He has been doing this for two years. I am calling for him to immediately resign from Congress based on this fraud!”

The dramatic reading happened Thursday when Acting Director of National Intelligence Joseph Maguire was on Capitol Hill to defend his handling of the whistleblower complaint about the call that touched off a formal impeachment inquiry this week.

The complaint and the transcript of that call, both released this week, detailed how Trump urged President Volodymyr Zelensky to investigate Democratic presidential candidate Joe Biden and his son, Hunter.

“There’s a lot of talk about Biden’s son, that Biden stopped the prosecution and a lot of people want to find out about that so whatever you can do with the Attorney General would be great,” Trump said in the phone call,  according to the transcript. “Biden went around bragging that he stopped the prosecution so if you can look into it…It sounds horrible to me.”

But at the hearing, Schiff, D-Calif., offered an exaggerated version of the call.

“I have a favor I want from you,” Schiff said while appearing to read from a piece of paper. “And I’m going to say this only seven times, so you better listen good. I want you to make up dirt on my political opponent, understand? Lots of it, on this and on that.” 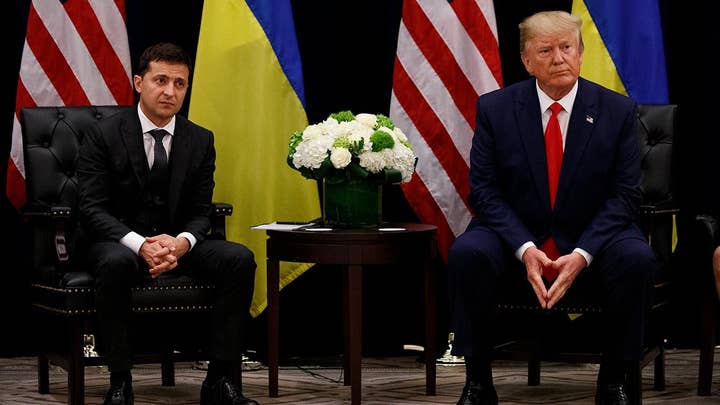 Schiff later chalked up his fictional summary of the phone call to a joke as he came under fire from conservatives for making up quotes.

“My summary of the president’s call was meant to be at least, part, in parody," Schiff said. "The fact that that’s not clear is a separate problem in and of itself. Of course, the president never said, ‘If you don’t understand me I’m going to say it seven more times,’ my point is, that’s the message that the Ukraine president was receiving in not so many words."

Trump on Friday was not buying that claim, however.

“HE WAS DESPERATE AND HE GOT CAUGHT,” he tweeted.

Schiff quickly responded to Trump’s tweet with one of his own, accusing him of trying to cover up a “shakedown.”

“But you’re right about one thing — your words need no mockery," Schiff said. "Your own words and deeds mock themselves."