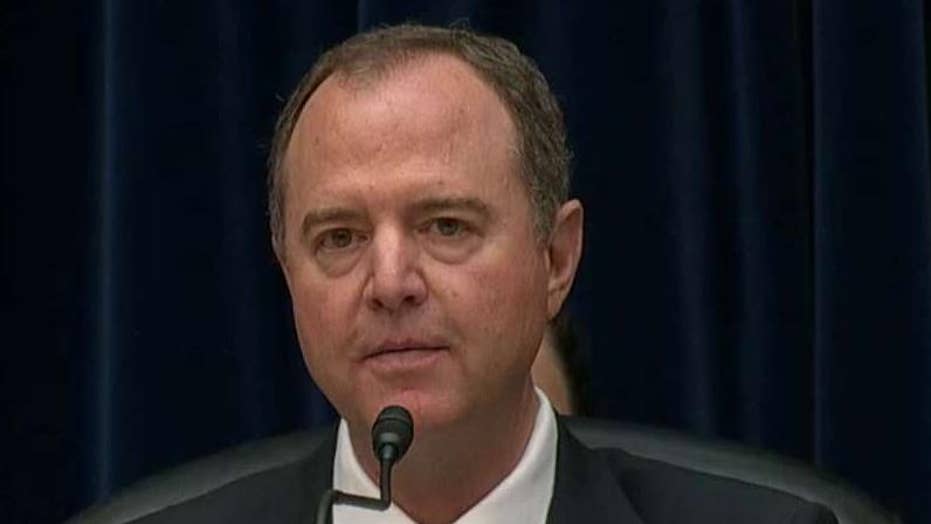 Adam Schiff: We were presented with the most graphic evidence that POTUS has betrayed his oath of office

House Intelligence Committee Chairman Adam Schiff, D-Calif., came under fire on Thursday for reading his own "parody" version of President Trump’s phone call with Ukrainian President Volodymyr Zelensky without noting he'd made it all up.

Acting Director of National Intelligence Joseph Maguire was on Capitol Hill to defend his handling of the explosive whistleblower complaint alleging President Trump pressured his Ukrainian counterpart to investigate the Biden family.

The complaint contains allegations related to Trump’s call with Zelensky in July, when he urged him to investigate alleged corruption involving former Vice President Joe Biden and his son, Hunter.

The White House on Wednesday released an unclassified version of the transcript of the phone call. The memo, which does not reflect a “verbatim transcript” but is based on “notes and recollections” of those memorializing the call, shows Trump congratulating Zelensky on his election victory before Trump eventually gets to the subject of the Bidens, seeking an investigation of some kind.

However, Schiff’s improvised version of the call was exaggerated, apparently for dramatic effect.

Schiff later chalked his fictional summary of the controversial phone call to a joke.

“My summary of the president’s call was meant to be at least, part, in parody. The fact that that’s not clear is a separate problem in and of itself. Of course, the president never said, ‘If you don’t understand me I’m going to say it seven more times,’ my point is, that’s the message that the Ukraine president was receiving in not so many words,” Schiff said.

“In opening statement, Rep. Schiff makes up dialogue to represent what Trump said to Zelensky. A rough transcript of the president's words exists, and is available, but Schiff's version is more dramatic,” Fox News contributor Byron York tweeted.

Conservative commentator Matt Walsh wrote that Schiff “knows that a lot of people watching will think that's actually what the transcript said” when it was pure fiction.

“In fact, the WHOLE POINT is that the transcript DOESN'T say what Schiff just said it said,” Walsh said.

Elise Stefanik, R-NY., later mocked the situation when it was her turn to grill Maguire

“I’m not going to improvise for parody purposes like the chairman of this committee did,” Stefanik said when reading the complaint. “I’m going to quote it directly.”

Many others took to Twitter to condemn Schiff for the stunt: