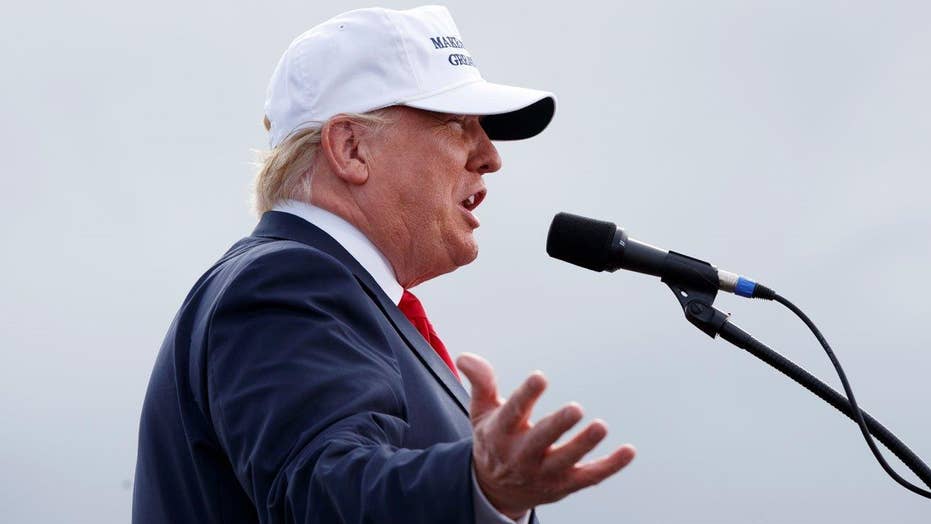 Jerry Falwell Jr.: Trump beside himself over 'untrue' claims

Four women accused Republican presidential nominee Donald Trump of sexual assault on Wednesday in a series of reports, adding to the already damaging revelations about his suggestive comments about women.

Trump’s campaign dismissed the allegations as having no merit or veracity, and it attacked The New York Times, accusing the media outlet of having a vendetta. In a letter from his attorneys Thursday, Trump demanded The New York Times retract what it called a "libelous article" and apologize.

Trump called the story a "fabrication" Thursday on Twitter.

The phony story in the failing @nytimes is a TOTAL FABRICATION. Written by same people as last discredited story on women. WATCH!

"For The New York Times to launch a completely false, coordinated character assassination against Mr. Trump on a topic like this is dangerous," Jason Miller, Trump's campaign spokesman, said in a separate statement. "To reach back decades in an attempt to smear Mr. Trump trivializes sexual assault, and it sets a new low for where the media is willing to go in its efforts to determine this election."

In a story published Wednesday evening, The New York Times says 74-year-old Jessica Leeds of New York told the paper that Trump groped her on a flight more than 30 years ago. Leeds says Trump grabbed her breasts and tried to put his hand up her skirt.

"He was like an octopus,” Leeds says. "His hands were everywhere ... It was an assault."

In the same story, Rachel Crooks tells the paper that the real estate developer "kissed me directly on the mouth" after she introduced herself to him outside a Trump Tower elevator in 2005.

"It was so inappropriate," Crooks tells the paper. "I was so upset that he thought I was so insignificant that he could do that."

Also Wednesday night, the Palm Beach Post published claims by a Florida woman that Trump had groped her during a concert at his Mar-a-Lago estate in January 2003. The woman, 36-year-old Mindy McGillivray told the paper that she "chose to stay quiet" and did not report the incident to authorities.

Trump press secretary Hope Hicks told the Post that there was "no truth" to McGillivray's allegation, adding "this allegation lacks any merit or veracity."

Additionally, PEOPLE Magazine writer Natasha Stoynoff published a story late Wednesday detailing her own encounter with Trump in 2005 when she went to interview Donald and Melania in Mar-a-Lago.

Stoynoff says that Trump showed her one “tremendous” room and allegedly pinned her against the wall and “forcing his tongue down my throat.”

A Trump spokeswoman told PEOPLE, “This never happened. There is no merit or veracity to this fabricated story.”

Trump responded, "No, I have not."

Cooper's question was in response to the release of a 2005 audiotape in which Trump made lewd remarks about women in a conversation with "Access Hollywood" host Billy Bush. Trump has repeatedly dismissed the remarks as "locker room talk."

Clinton campaign spokesman Jennifer Palmieri said the new reports "sadly [fit] everything we know about the way Donald Trump has treated women. These reports suggest that he lied on the debate stage and that the disgusting behavior he bragged about in the tape is more than just words.”