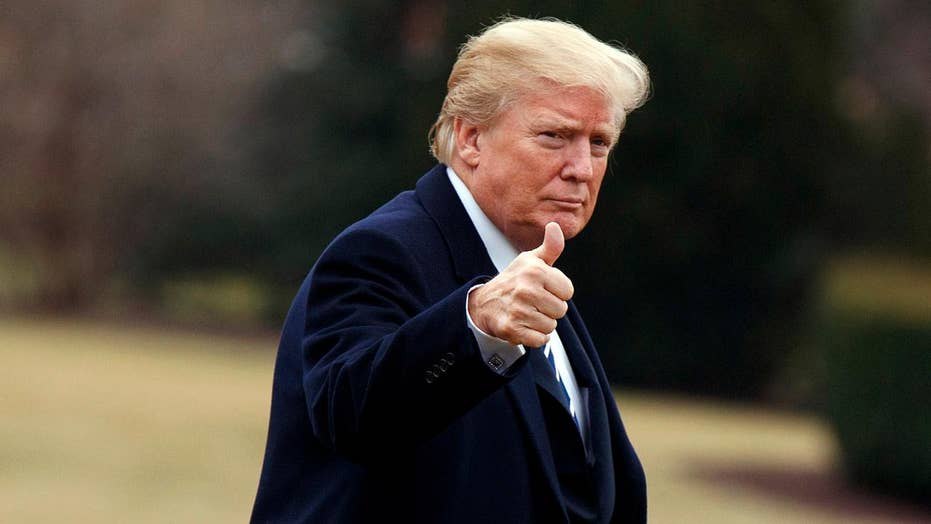 Trump expected to give go ahead for release FISA memo

Hours before the expected release of a damning memo on FBI spying abuses, President Trump unleashed an early-morning tweet at a Justice Department he said has been "politicized" by Democrats.

The White House said Friday that it transmitted the memo, along with an accompanying letter from the president, to the House Permanent Select Committee on Intelligence.

Fox News learned that the White House did not make any redactions to the memo. The memo is expected to be released Friday afternoon.

The president took a shot at the Justice Department earlier Friday, after much back and forth between the Department and its subsidiary FBI, which have argued against release of a memo summarizing the House Permanent Select Committee on Intelligence's probe of the department's investigation into alleged Trump-Russia collusion.

Nunes, R-Calif., authored much of the memo

"The top Leadership and Investigators of the FBI and the Justice Department have politicized the sacred investigative process in favor of Democrats and against Republicans - something which would have been unthinkable just a short time ago," Trump wrote. "Rank & File are great people!"

Trump told a House member after his State of the Union speech that he would "100 percent" authorize release of the memo, which Committee Chairman Devin Nunes, R-Calif., helped author. The next day, White House Chief of Staff John Kelly reiterated the memo's pending release, but the threat set off a flurry of lobbying by Justice Department officials to block it.

Democrats have attacked Nunes, accusing him of altering the memo and warning that its release could reveal and jeopardize federal investigative tactics. House Democratic Leader Nancy Pelosi, D-Calif., has called for the removal of Nunes, unleashing a Twitter storm on Thursday warning of Nunes’ “obsession” with the memo. Pelosi said he was “unfit” to serve as chairman of the House Intelligence Committee.

Trump is believed to be sending the memo back to Nunes' committee, with his blessing that it be released. But it is not clear if FBI Director Christopher Wray was successful in getting the White House to redact certain names, which reportedly could include that of Deputy Attorney General Rod Rosenstein and ousted FBI Deputy Director Andrew McCabe.

Wray was rumored to be considering resigning over the memo (Copyright 2017 The Associated Press. All rights reserved.)

The FBI said this week that the bureau has “grave concerns” about the classified memo.

“With regard to the House Intelligence Committee’s memorandum, the FBI was provided a limited opportunity to review this memo the day before the committee voted to release it,” the FBI said in a statement this week. “As expressed during our initial review, we have grave concerns about material omissions of fact that fundamentally impact the memo’s accuracy.”

But the bureau’s claim that the memo involved “omissions of fact” came a day after a source told Fox News that two senior FBI officials reviewed the memo and “could not point to any factual inaccuracies” in the memo itself.

In a sign of the divide over the memo, even within the FBI, Wray himself visited Capitol Hill Sunday, and according to a senior U.S. official, “expressed concern about the accuracy of the memo” and told others in the meeting that the memo “gives an inaccurate impression of the bureau’s work on this matter.”

But despite the FBI’s concern, Nunes’ persisted this week, saying that the FBI has “stonewalled Congress’ demands for information for nearly a year.”

“It’s no surprise to see the FBI and DOJ issue spurious objections to allowing the American people to see information related to surveillance abuses at these agencies,” Nunes said. “Regardless, it’s clear that top officials used unverified information in a court document to fuel a counter-intelligence investigation during an American political campaign.”

He added: “Once the truth gets out, we can begin taking steps to ensure our intelligence agencies and courts are never misused like this again.”