Could the real trouble for Democrats in 2020 be ex–Starbucks CEO Howard Schultz?

President Trump on Monday fired back at Howard Schultz, saying the former Starbucks CEO doesn’t have the “guts” to run for president after he announced he was mulling a 2020 White House bid as an independent -- and took a few shots at Trump himself.

“Howard Schultz doesn’t have the ‘guts’ to run for President! Watched him on @60Minutes last night and I agree with him that he is not the ‘smartest person.’ Besides, America already has that! I only hope that Starbucks is still paying me their rent in Trump Tower!” Trump tweeted Monday morning.

The president’s tweet comes after Schultz's interview on CBS News’ “60 Minutes,” where he revealed he was “seriously thinking” about running for president in 2020 as a “centrist independent,” and challenged Trump’s fitness for office.

“We’re living at a most fragile time, not only the fact that this president is not qualified to be the president, but the fact that both parties are consistently not doing what’s necessary on behalf of the American people,” Schultz said, specifically citing the national debt as “a reckless example, not only of Republicans but of Democrats, as well, as a reckless failure of their constitutional responsibility.”

A fiery response from Trump was expected. When told during the interview that Trump would be tweeting about him in response, Schultz said, "I've become bored with President Trump and his tweets."

Schultz, though, is taking heat from both sides amid fears from Democrats he could play the role of spoiler, especially considering Schultz described himself as a “lifelong Democrat” yet is now contemplating a run as an independent.

“Howard Shultz running as an independent isn’t about bringing people together,” Tina Podlodowski, the Democratic Party chair in Schultz’s home state of Washington, said in a statement Sunday. “It’s about one person: Howard Schultz.” 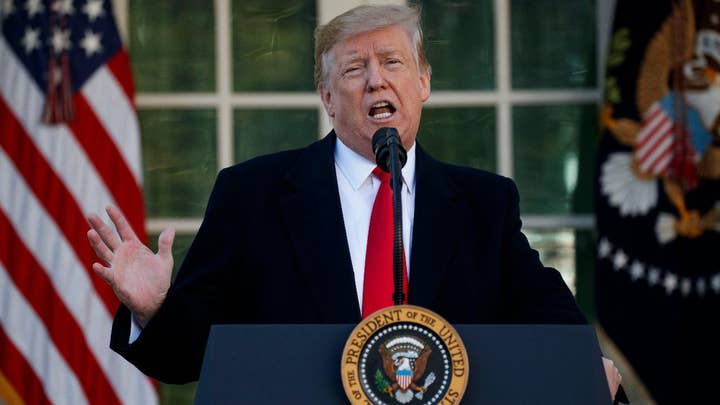 Neera Tanden, the president for the liberal Center for American Progress, also blasted Schultz, saying she would boycott Starbucks if he ran.

“Vanity projects that help destroy democracy are disgusting,” she tweeted. “I’m not giving a penny that will end up in the election coffers of a guy who will help Trump win.”

However, some of his views might also clash with a Democratic Party gearing up to unseat Trump. Some potential nominees, including Massachusetts 2020 candidates Sen. Elizabeth Warren and California Sen. Kamala Harris, have endorsed single-payer health care, heavily taxing the rich or free tuition at public colleges. Schultz has criticized such proposals as unrealistic and instead emphasized expanding the economy and curbing entitlements.

"It concerns me that so many voices within the Democratic Party are going so far to the left," Schultz told CNBC last June. "I ask myself, 'How are we going to pay for all these things?' in terms of things like single-payer or people espousing the fact that the government is going to give everyone a job. I don't think that's realistic."

During his “60 Minutes” interview, Schultz dodged a question about whether his potential independent run would make him a spoiler for the Democratic nominee.

“I wanna see the American people win,” he said. “I wanna see America win. I don’t care if you’re a Democrat, Independent, Libertarian, Republican. Bring me your ideas. And I will be an independent person, who will embrace those ideas. Because I’m not, in any way, in bed with a party.”

No third-party or independent candidate has won over 5 percent of the popular vote since Ross Perot in 1996. But Schultz argued that a majority of the electorate is “exhausted” with politics.

“What we know, factually, is that over 40 percent of the electorate is either a registered Independent or currently affiliates themselves as an Independent,” he said. “Their trust has been broken. And they are looking for a better choice.”