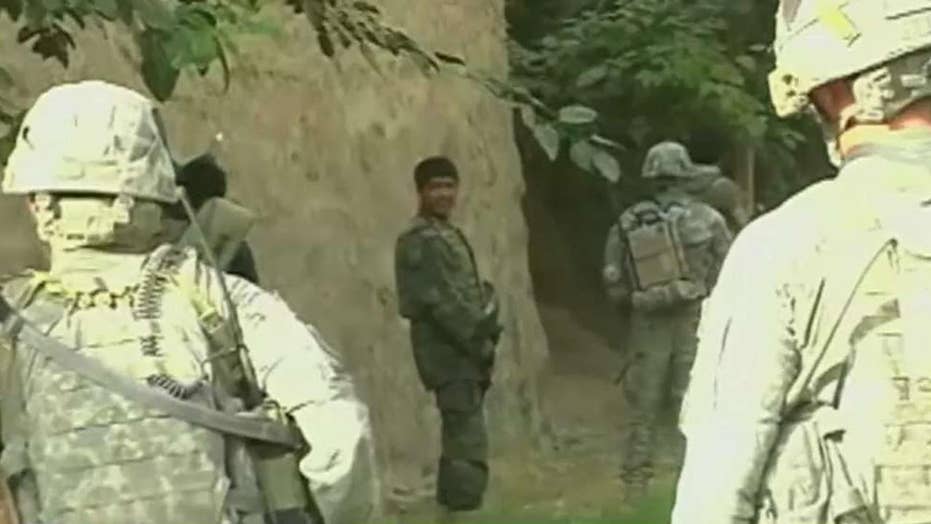 President Trump approves the deployment of roughly 1,500 U.S. troops to the region; Lucas Tomlinson reports from the Pentagon.

President Trump has approved the Pentagon’s plan to send about 1,500 troops to the Middle East amid rising tensions with Iran, senior military leaders announced Friday.

Fewer than 1,000 new troops are actually deploying, and about 600 soldiers who are already deployed will be extended. The 600 are part of a Patriot missile battalion currently deployed in the region.

“We're going to be sending a relatively small number of troops,” the president told reporters outside the White House on Friday. “Mostly protective. Some very talented people are going to the Middle East right now. And we'll see what happens."

The plan is intended to bolster security for existing American and allied forces in the region and deter attacks from Iran, officials say.  Any additional destroyers or submarines sent to the region would be equipped with Tomahawk cruise missiles, they said.

TRUMP TEAM BRIEFS CONGRESS ABOUT IRANIAN THREAT: 'THIS IS ABOUT DETERRENCE, NOT ABOUT WAR'

“We do not see these forces as provocative,” said Acting Assistant Secretary of Defense for International Security Affairs Katie Wheelbarger.

The troops are not going to Iraq or Syria, but to existing bases elsewhere in the region where the U.S. maintains forces. The Pentagon will not disclose the exact locations.

Pentagon officials also told reporters earlier today the new forces going to the region is response to Iran's aggressive behavior, not to provoke them.

Senior Pentagon officials say they have a “high degree” of confidence -- Iran's Islamic Revolutionary Guard forces was behind the attack on the four oil tankers earlier this month outside the Persian Gulf. Navy Vice Adm. Michael Gilday, head of the Joint Staff at the Pentagon, said mines were used in the attack, a signature of Iran’s involvement.

“We believe with a high degree of confidence that this stems back to the leadership of Iran at the highest levels,” Gilday said.

No large military units, such as U.S. Army brigade combat teams, are expected to deploy. Instead, senior military leaders want to deploy an additional Patriot anti-aircraft missile battery, a defensive weapon system. They also want to deploy another warship or submarine to the region, more surveillance and reconnaissance aircraft and potentially more Air Force fighter jets.

On Thursday, Acting Defense Secretary Patrick Shanahan had rejected news reports saying 5,000 or 10,000 troops could be sent to the region, saying the number was “not accurate.” But he did acknowledge more forces could soon be heading to the region for force protection.

The U.S. began reinforcing its presence in the Persian Gulf region this month in response to what it said was a threat from Iran.

In early May, the U.S. accelerated the deployment of an aircraft carrier strike group to the Mideast and sent four B-52 bomber aircraft to the region. The Pentagon also decided to move a Patriot air-defense missile battery to an undisclosed country in the area.

On Friday, an anti-war Republican ally of the president urged him to reverse his decision.

"I strongly urge @realdonaldtrump to reconsider more troops to the Middle East," tweeted Kentucky Sen. Rand Paul. "This escalation doesn’t get us out of our decades long, seemingly endless wars Mr. President. Trust your instincts and follow what you ran on, not the neocons around who want to repeat past mistakes."

On Tuesday, top officials in the Trump administration were dispatched to Capitol Hill to brief lawmakers about the escalating tensions with Iran, saying afterward they are focused on trying to deter attacks and avoid war.

“Our biggest focus at this point is to prevent Iranian miscalculation,” Shanahan told reporters after the briefing. “We do not want the situation to escalate. This is about deterrence, not about war.”

Secretary of State Mike Pompeo said after the briefing: "Our efforts and our ultimate objective over the past days has been to deter Iran.”

But some lawmakers, after the briefing, still expressed concern about war breaking out.

“We were lied to in terms of Iraq supposedly having weapons of mass destruction," said Vermont Sen. Bernie Sanders, a 2020 Democratic presidential candidate. "A war with Iran would be an absolute disaster, far worse than the war with Iraq. I hope the people tell this administration that we will not go to war in Iran.”

Other lawmakers said the threats from Iran were specific, necessitating actions from the administration to prevent attacks.

"The action taken by the administration is totally appropriate," Utah Republican Sen. Mitt Romney said after the Tuesday briefing, saying the actions are designed to deter attacks by Iran.