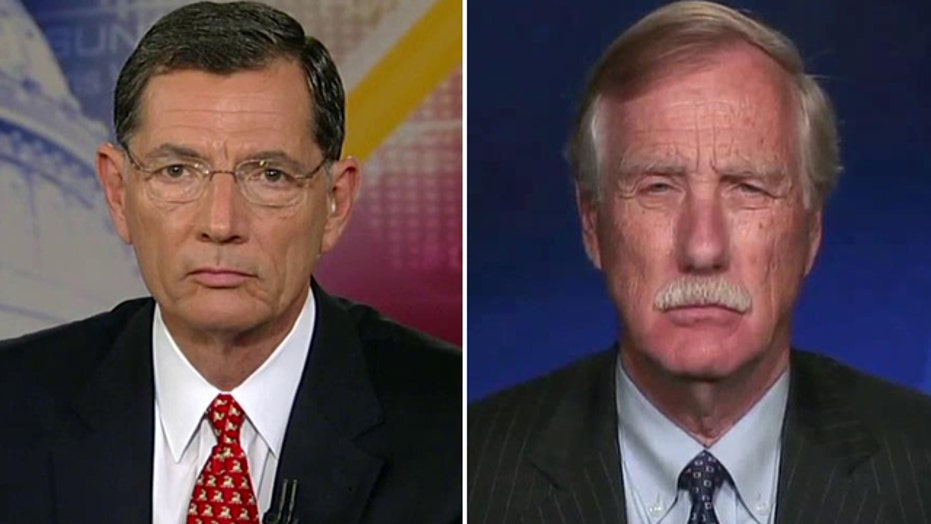 Will Congress vote to authorize war against ISIS?

The simmering bipartisan battle over whether the Senate will try to swiftly replace retiring Attorney General Eric Holder heated up Sunday, with a top Senate Republican saying such a move would show the “desperation” Democrats feel about possibly losing control next month of the upper chamber.

“It does need to wait,” Wyoming Sen. John Barrasso, chairman of the Senate’s Republican Policy Committee, told “Fox News Sunday." “I am opposed to any successor during the lame-duck session.”

Political analysts essentially give Republicans a slightly more than 50 percent chance of winning a net total of six seats on Nov. 4 to take control of the Senate. However, the GOP would not officially take over the chamber until January.

Barrasso said if the Democrat-controlled Senate appoints a President Obama nominee it will mark the first time since the Civil War that an attorney general has been appointed in a so-called “lame duck” session -- the period between when new senators are elected and the other party takes control of the chamber.

Though Republicans are no fans of Holder, Barrasso said any attempt by Senate Majority Leader Harry Reid to swiftly replace him would be the “final act” is his failed leadership of the chamber.

Holder, who resigned on Thursday, is the country’s first black attorney general and is considered an unflinching champion of civil rights in enforcing the nation's laws.

He led the Justice Department since the first days of Obama's presidency and is the fourth-longest serving attorney general in U.S. history.

However, he has faced strong criticism during his tenure -- at times bipartisan -- for a succession of controversies including a failed plan to try terrorism suspects in New York City, the botched gun-running probe along the Southwest border that prompted Republican calls for his resignation, and what was seen as a failure to hold Wall Street accountable for the financial system's near-meltdown.

The Republican-controlled House voted two years ago to make Holder the first sitting Cabinet member to be held in contempt of Congress -- for refusing to turn over documents in the gun-running operation known as Operation Fast and Furious. The administration is still fighting in court to keep the documents confidential.

Barrasso called Holder “a presidential protector and a puppet of the administration.”

“We need an attorney general for the people,” he said.

Independent Maine Sen. Angus King told Fox News that he thought Holder was a “good man” but that he was “bothered” by him failing to go after Wall Street after the crisis.

“Not a single prosecution,” King said.

He also said he hasn’t heard of a potential nominee, and that he wants to see whether Obama puts forward a name and if that person might in fact garner immediate bipartisan support.

“So, I'm going to wait and see,” said King, pointing out members of this Congress are on the payroll until January and have a duty to vote.

On Friday, White House Press Secretary Josh Earnest seemed to call for a quick confirmation, pointing out that Bush administration Defense Secretary Robert Gates was confirmed by Senate Republicans in December 2006, a month after they lost control of the chamber.

White House officials said Obama had not made a final decision on a replacement for Holder.

Holder also aggressively enforced the Voting Rights Act, addressed drug-sentencing guidelines that led to disparities between white and black convicts, extended legal benefits to same-sex couples and refused to defend a law that allowed states to disregard gay marriages. He oversaw the decision to prosecute terror suspects in U.S. civilian courts instead of at Guantanamo Bay and helped establish a legal rationale for lethal drone strikes on suspects overseas.

Only three other attorneys general in U.S. history have served longer than the 63-year-old Holder: William Wirt in the administrations of James Monroe and John Quincy Adams, Janet Reno in the Bill Clinton administration and Homer Cummings for Franklin Roosevelt.