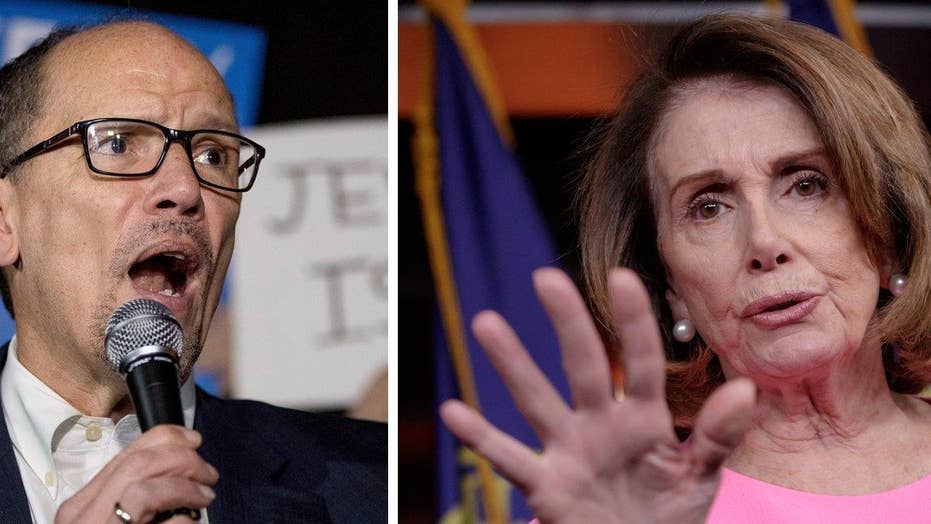 Perez, Pelosi split on whether Democrats can be pro-life

Democrats no longer have a choice about being pro-choice.

So says Democratic National Committee Chairman Tom Perez, who drew a swift rebuke from Republicans and a public swipe from a top leader of his own party after declaring Friday that “every Democrat” should be pro-choice -- no exceptions.

Asked Sunday if a Democratic politician could be pro-life, House Minority Leader Nancy Pelosi was unequivocal.

“Of course,” Pelosi told NBC's “Meet The Press.” “I have served many years in Congress with members who have not shared my very positive – my family would say aggressive – position on promoting a woman’s right to choose.”

She added: “Why don’t you interview Tom Perez?”

The controversy originated after a DNC “Unity Tour” stop last week in Nebraska, where DNC Deputy Chairman Rep. Keith Ellison, D-Minn., and Sen. Bernie Sanders, I-Vt., appeared with a former state senator who had once supported a bill requiring an abortion-seeking woman to “be told of her right to request a list of places she can get a free ultrasound.” The ex-senator, Heath Mello, is now an Omaha mayoral candidate.

The eight-year-old-bill didn’t require the woman to get an ultrasound; however, NARAL Pro-Choice America President Ilyse Hogue blasted the embattled DNC for straying from the pro-choice agenda.

“The actions today by the DNC to embrace and support a candidate for office who will strip women – one of the most critical constituencies for the party – of our basic rights and freedom is not only disappointing, it is politically stupid,” Hogue said in a statement.

Sanders, an independent who caucuses with Democrats and ran in the Democratic presidential primary, responded by saying intraparty differences on abortion were natural. Sanders contended that a candidate in a Southern state couldn’t be expected to have identical views as a candidate in a liberal, coastal state.

Perez, however, was having none of Sanders’ pragmatism, instead firmly lashing his party to the pro-choice position.

“Every Democrat, like every American, should support a woman’s right to make her own choices about her body and her health,” Perez said in a statement on Friday. “That is not negotiable and should not change city by city or state by state.”

Pro-life Republicans took the opportunity to hit Perez, with Nebraska Sen. Ben Sasse tweeting out a picture of a baby in the womb.