EXCLUSIVE - Sen. Tim Scott heads to Iowa on Thursday, a trip that’s sure to spark some speculation about the GOP senator’s national ambitions in 2024.

But Scott, the only Black Republican in the Senate, has his eyes on something much more immediate. He pointed to his own reelection next year as he told Fox News that he "can’t see past June of 2022."

"If you don’t win your primary, there is no general election," the South Carolina senator said.

SCOTT TAKES AIM AT BIDEN AND DEMOCRATS FOR FILIBUSTER FLIP

While the stop in Iowa – the state whose caucuses for half a century have kicked off the presidential nominating calendar – will likely grab outsized media attention – it’s nothing out of the ordinary for Scott, who has spent plenty of time on the road in recent years helping fellow Republicans on the campaign trail. And part of his push is to bring more diversity to the GOP.

Scott emphasized in an exclusive national interview with Fox News on the eve of his trip to Iowa that he has always thought that "our actual party is more diverse than the elected representatives appear."

"Frankly, what we really want in the party is a party that’s big enough to have diversity of thought being the leading definition of diversity," the senator explained. "However it is certainly good to have spokespeople or ambassadors for the party that come from every facet of our society."

Scott highlighted that "it’s important for me to be around the country…finding a way to build a more diverse representation in the party that I know is already more diverse."

SCOTT RESPONDS TO MEDIA CRITICISM OF HIS 'WOKE SUPREMACY' REMARKS

The then-South Carolina state lawmaker was elected to the U.S. House in 2010. Three years later he was appointed by former Gov. Nikki Haley to fill a vacant Senate seat, becoming the first Black Republican in the chamber in over 30 years. He won a special election in 2014 and in 2016 earned a full six-year term.

Now, he starting to look ahead to his 2022 reelection bid.

"You’ve got to protect home," the senator noted. "I’m probably in South Carolina 44-46 weekends a year." 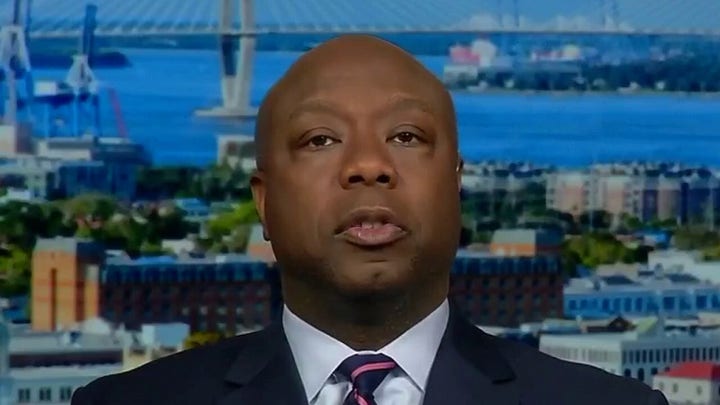 While his main focus in the 2022 cycle will be his reelection, Scott said that won’t sidetrack him from continuing to travel the country to help fellow Republicans.

SCOTT ON A KEY LESSON LEARNED FROM THE COVID CRISIS

Iowa GOP chair Jeff Kaufmann called Scott "a man of integrity" and "a man of action."

"I think my folks out here just want to see him up front and personal," Kaufmann noted. "To be real honest with you, I think they want to see the man behind the legend."

While the purpose of Scott’s appearance is to help raise money to elect Iowa Republicans in 2022, the activists in the audience in Davenport may also have 2024 on their minds.

"I believe they’re going to give him a real good look," Kaufmann predicted.

For potential 2024 contenders who face reelection next year, opening up too much about the next GOP presidential nomination race is political malpractice. And Scott was quick to downplay any talk of the next race for the White House.

"I can’t imagine thinking about any office beyond winning my primary in June of 2022," he emphasized. "That is my primary objective and then I’ll worry about the general."

Asked again about 2024, Scott declared that his "only objective is to be the United States senator for the great state of South Carolina."

And then Scott harkened back to his high school and college football playing days, saying, "If you are not focused on this weekend, no other weekend matters."