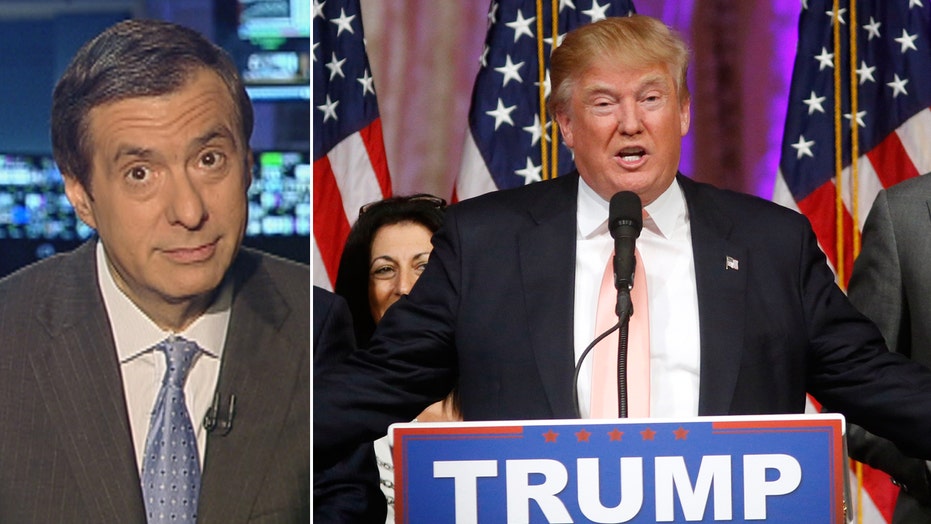 Kurtz: Blaming the media for The Donald

As Donald Trump’s detractors grow increasingly loud and desperate, they are aiming their ire at a new target:

Trump must be stopped, they declare, and it’s the media’s mission to halt him in his tracks.

It’s an argument that fundamentally misreads the role of the press. And it is being made by some generally smart people who are so apoplectic over the prospect of a Trump nomination or Trump presidency that they don’t understand why journalists haven’t convinced the country to despise The Donald the way they do.

The new rallying cry is an outgrowth of earlier laments that the media “created” Trump or “enabled” Trump or “rolled over” for Trump, as if that, even if true, is responsible for him winning 19 Republican contests.

Nearly 7-1/2 years after Barack Obama’s election, we still hear a familiar refrain on the right: If only the media had properly vetted him, he would never have made it to the White House. Never mind that Obama managed to beat the Clinton machine in his first campaign and then to get himself reelected. The 2008 coverage of Obama was indeed too soft, but by 2012 the country certainly knew what it was getting.

The current complaints center on the fantasy notion that news organizations have failed to aggressively report on Trump.

But I have read hundreds of articles, and watched thousands of segments, about Trump’s business setbacks; his casino bankruptcies; allegations of mob ties and racial discrimination; the use of foreign workers to staff his properties and make his merchandise; how he gave large sums to Democrats, including Hillary Clinton; how he changed from liberal positions on abortion and health care; even accusations that he cheats at golf.

I have consumed many fact-checking efforts about erroneous or questionable statements he has made, about how much Medicare spends on prescription drugs, or having watched reports of thousands of Muslims celebrating on 9/11 in New Jersey.

I have read or seen a long line of commentators accusing Trump of being racist, sexist, misogynist, xenophobic, of being ignorant on policy, of encouraging violence.

And yet he keeps winning primaries. The negative media attention and fact-checking attempts bounce off him like rubber arrows.

There are limits, it turns out, to the mighty power of the press. Voters don’t much trust the media these days, and they get to decide which candidates they like.

Of course Trump has received disproportionate air time of his rallies and speeches in a way that is unfair to his rivals. But he also subjects himself to seemingly endless rounds of interviews—including the morning shows yesterday--taking all manner of journalistic questions in a way that his opponents do not. Hillary Clinton, for instance, has gone about 100 days without holding a news conference.

Trump, for his part, continues to trash the press. Even after his big victories Tuesday night, he complained about one pundit’s comments and took a whack at the “disgusting” reporters in the room. His campaign also yanked the credentials of a Politico writer who had written a one-sided and harshly negative piece about his campaign manager.

This sort of thing is hardly unknown in politics, but it’s small ball that consumes too much of Trump’s time. As he pivots toward a more unifying tone, he might try to rise above the daily cable chatter.

I am not pro-Trump or anti-Trump. I am a journalist. And journalists who aren’t in the opinion business are supposed to be fair. They often fall short, of course, but it is not a “failure” on their part that Trump is on his way to the Republican nomination—that is, unless you’re a Trump-hater who thinks it’s our duty to knock out the candidate you so detest.

Brendan Nyhan, an assistant professor at Dartmouth, is among those faulting the press:

“Trump’s rise represents a failure in American parties, media, and civic institutions - and they're continuing to fail right now.

“Shockingly few public figures and elites are defending the norms of public debate and restraint from violence that Trump is bulldozing.”

It’s a “failure” because he thinks Trump is a menace and that the press has somehow overlooked that.

The Atlantic’s Ron Fournier, who is consistently tough on both sides, is appalled by the Trump candidacy:

“I overestimated the media. My profession is no longer a trusted arbiter of the truth, which means the country lacks a common set of facts around which to argue. A broken business model makes media companies desperate for clicks and ratings, which makes news leaders vulnerable to Trump’s deal-with-the-devil bravado. You can’t talk to a journalist today without hearing about the shrinking of their newsrooms—in both size and mission.”

It’s true that massive layoffs have diminished investigative reporting, and that Trump drives clicks and ratings. But you can only describe his coverage as dealing with the devil if you think he’s the devil.

“Can Donald Trump be stopped short of the Republican nomination? Probably not. But the rational wing of the party has to try — quickly and forcefully — to make that happen.”

This prompted an NPR executive to arrange an on-air interview in which Roberts explained herself, since the network’s journalists aren’t supposed to support or oppose any candidate. But Cokie isn’t bound by those rules because she’s listed as a commentator.

From the left, Glenn Greenwald of The Intercept updates his argument that journalists are too passive and hung up on balance.

He says that “little journalistic alarm over Trump is expressed. That’s because the rules of large media outlets — venerating faux objectivity over truth along with every other civic value — prohibit the sounding of any alarms. Under this framework of corporate journalism, to denounce Trump, or even to sound alarms about the dark forces he’s exploiting and unleashing, would not constitute journalism. To the contrary, such behavior is regarded as a violation of journalism. Such denunciations are scorned as opinion, activism, and bias: all the values that large media-owning corporations have posited as the antithesis of journalism in order to defang and neuter it as an adversarial force.”‎

Leaving aside Greenwald’s contempt for “corporate journalism,” there is hardly a shortage of opinion-mongering in print, online and on the air. Commentators on the left and the right, united against Trump, have likened him to George Wallace and Adolf Hitler. That certainly constitutes sounding the alarm.

As for the avalanche of Trump coverage in the rest of the media, it’s hard to argue that people aren’t getting enough information--including lots of negative information--to make a decision.

At the heart of these accusations of media failure is the notion that if they were just more hostile, the dumb readers and viewers would see Donald Trump for the clear and present danger that has so unnerved his critics.