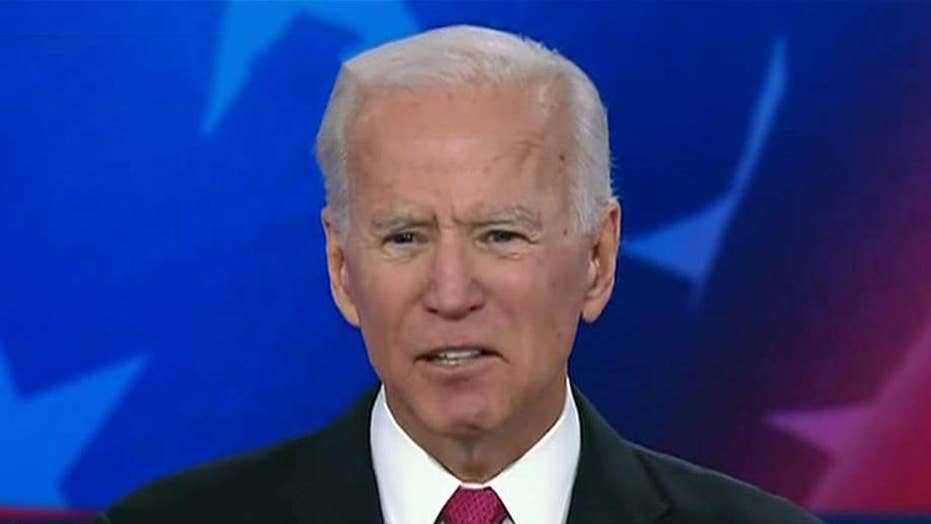 The political climate in 2019 – between a presidential impeachment and the launch of the 2020 campaign season – has been overwhelmingly tense, but has also featured intermittent comic relief in the form of some incredible gaffes.

No one is immune to the gaffe. Democrats and Republicans, presidential hopefuls and President Trump himself, have all committed cringe-inducing blunders over the course of the past year.

Here is a look back at some of the most memorable.

With former Vice President Joe Biden once again on the campaign trail, there have been too many gaffes to pick just one, so we’ve whittled it down to a cool five.

The November Democratic debate featured several memorable moments. At one point, while touting his support among African-Americans, Biden claimed he received support from the only black woman to be elected to the U.S. Senate. The problem is there have been two, and the second just happened to be sharing the stage with him.

Sen. Kamala Harris, D-Calif., couldn’t help but laugh and say, "The other one is here." Biden then corrected himself.

Perhaps even more awkward was Biden’s choice of words when addressing how to combat violence against women.

Harris could be seen restraining herself this time.

"I really mean it," Biden then said.

September’s debate also featured a strange moment when Biden took a progressive stance on criminal justice reform that went further than he apparently intended. Biden claimed that too many individuals are in prison and the system requires change and then made a bold proclamation.

“Nobody should be in jail for a nonviolent crime,” he said.

This immediately drew snarky comments on social media about how white-collar criminals like Bernie Madoff, Martin Shkreli and Paul Manafort would benefit from such a policy.

In the race relations department, Biden took some heat for a blunder during an August discussion of academics. While campaigning in Iowa, he said that “poor kids are just as bright and just as talented as white kids.” Biden immediately caught the gaffe. “Wealthy kids, black kids, Asian kids,” he said, trying to recover gracefully.

In September, Biden was called out for telling a story about a visit to Afghanistan and an American military service member that turned out to be a mixture of several different incidents.

According to Biden, a Navy captain rappelled down a ravine under enemy fire to recover a fallen soldier’s body and later refused a Silver Star from Biden, telling him, “Do not pin it on me, Sir! Please, Sir. Do not do that! He died. He died!"

But according to a Washington Post piece, the story as told by Biden never happened, although elements of the tale resembled actual events from various times involving multiple servicemen.

Biden played it off as insignificant when it comes to his ability to be president, telling NPR, “The details are irrelevant in terms of decision-making.”

Rep. Alexandria Ocasio-Cortez, D-N.Y., is known for her Twitter game, but she missed the mark when she accused Republicans of posing “male members next to cardboard cutouts of young female legislators,” while retweeting a post from the Republican Party of Kentucky that included an image of an older gentleman next to a cutout of her.

The problem was that Kentucky Rep. John Yarmuth, who was in the photo, is a Democrat. While the image was tweeted by the Kentucky GOP, the post clearly identified him as “the lone #Kentucky #Democrat in Congress.” Also, they’re colleagues.

President Trump appeared to get sucked into some sort of time warp in the middle of his July 4 speech this year. Recalling the American victory over the British in the Revolutionary War, he included some details that were, well, questionable.

“The Continental Army suffered a bitter winter at Valley Forge, found glory across the waters of the Delaware, and seized victory from Cornwallis of Yorktown,” Trump said. “Our army manned the air, it rammed the ramparts, it took over the airports, it did everything it had to do, and at Fort McHenry, under the rockets’ red glare, it had nothing but victory.”

For starters, the battle at Fort McHenry and the “rockets’ red glare” that inspired Francis Scott Key to write “The Star-Spangled Banner” took place during the War of 1812, not the Revolutionary War. Of course, the most glaring errors in the speech were Trump’s references to the army manning the air and taking over airports, since planes had not been invented yet at that time.

The fighting at Fort McHenry also took place in 1814, 89 years before the Wright Brothers’ first successful flight in 1903.

Trump later claimed that he had teleprompter difficulties during the speech.

New York City Mayor Bill de Blasio’s presidential campaign did not last very long, but it did provide an incredibly awkward moment when he quoted a Spanish phrase when addressing the Cuban community in Miami. That phrase happened to be "Hasta la victoria, siempre," meaning, "Until victory, always," and is attributed to Marxist revolutionary Ernesto “Che” Guevara, a key figure in the Cuban Revolution led by Fidel Castro that resulted in many Cubans fleeing to the U.S.

Hizzoner caught flak from both parties for this one, with Sen. Marco Rubio, R-Fla., and Rep. Donna Shalala, D-Fla., taking him to task.

"It is unacceptable to quote a murderer like Che Guevara," Shalala said.

'Great to Have You'

One of the most-watched 2020 Senate races involves the Democratic challenges to Senate Majority Leader Mitch McConnell. One of the Kentucky Republican’s potential opponents next November is former Marine aviator Amy McGrath.

During one CNN appearance, McGrath addressed a past statement where she compared President Trump’s 2016 victory to 9/11, but that was not even the awkward part of the interview.

After McGrath admitted that she “can see why, you know, folks might be upset about” the comparison,” it seemed like that was the end of the segment.

But then just as the interview was wrapping up, McGrath awkwardly signed off by telling Jake Tapper, “Great to have you” -- a line typically used by hosts, not their guests.

McConnell's campaign eagerly circulated the clip on Twitter, simply saying, “This is embarrassing.”

Two of Trump’s defenders during the investigation of his dealings with Ukraine appeared to cause more harm than good when they made statements about the nature of events surrounding the controversy, only to immediately contradict themselves.

Trump’s personal attorney Rudy Giuliani appeared to talk himself in circles during a September CNN interview. Host Chris Cuomo asked the former New York City mayor if he had asked Ukraine to investigate Joe Biden, and Giuliani replied, “No, actually I didn’t,” saying he had asked them to investigate possible Ukrainian interference in the 2016 election.

Giuliani immediately added that “the only thing I asked about Joe Biden” was about how former Ukrainian prosecutor general Yuriy Lutsenko dropped a case against not-for-profit organization AntAC.

“So you did ask Ukraine to look into Joe Biden!” Cuomo stated, to which Giuliani responded, “Of course I did!”

After Cuomo pointed out the contradiction, Giuliani explained that he had asked Ukraine “to look into the allegations related to my client,” and that those allegations “tangentially involve Joe Biden.”

Giuliani admitted to "Fox News Sunday" that he misspoke, and said he was quick to correct himself.

"The no was obviously wrong, I corrected it immediately,” Giuliani said, adding, “I corrected it before he corrected it. The reality is, the distinction is this: What they’re saying is, I went there for, on a political mission, to kind of get Joe Biden in trouble. Ridiculous. I went there as a lawyer defending his client.”

The following month, acting White House Chief of Staff Mick Mulvaney had a rocky a White House press briefing where he defended Trump’s dealings with Ukraine. Mulvaney first insisted that Trump was hesitant to give aid to Ukraine due to concerns of corruption and the lack of contributions from other countries.

“Did he also mention to me in passing the corruption related to the DNC server? Absolutely, no doubt question about that. That’s why we held up the money.”

When ABC’s Jonathan Karl told Mulvaney “that is a quid pro quo” if Trump was delaying the aid for the investigation, Mulvaney replied, “We do that all the time with foreign policy,” adding, “I have news for everybody: get over it. There is going to be political influence in foreign policy.”

Those quotes were ultimately used against Trump in the House Intelligence Committee’s impeachment inquiry report.

Mulvaney then went on "Fox News Sunday" and insisted that he did not say that there was a quid pro quo.

“That’s what people are saying that I said, but I didn’t say that,” Mulvaney said, claiming that his words were taken the wrong way.

While the source remains anonymous, social media theorists believed that Rep. Eric Swalwell may have leaked some, well, sensitive material during an interview with MSNBC’s Chris Matthews in November when a loud fart-like sound was heard while he was speaking. Twitter users analyzed the clip like it was the Zapruder film, pointing to a slight reaction from Swalwell at the time the shot was fired. Others claimed that it was none other than Matthews.

"Hardball" staff later insisted that it was simply the sound of a mug "scraping across the desk."

Housing Secretary Ben Carson had plenty to chew on after he apparently mixed up a real estate term with a popular snack food.

“I’d also like for you to get back to me – if you don’t mind – to explain the disparity in REO rates. Do you know what an REO is?” California Democratic Rep. Katie Porter quizzed Carson during a House Financial Services Committee hearing in May.

“No, not an Oreo. An REO,” Porter answered, referring to the acronym for real-estate owned properties.

Porter then mocked Carson on Twitter, posting a clip of the exchange and saying, “He thought I was referring to a chocolate sandwich cookie. No, really.”

Ever the good sport, Carson then tweeted a thank you message to Porter, saying that he was sending her some Oreos.