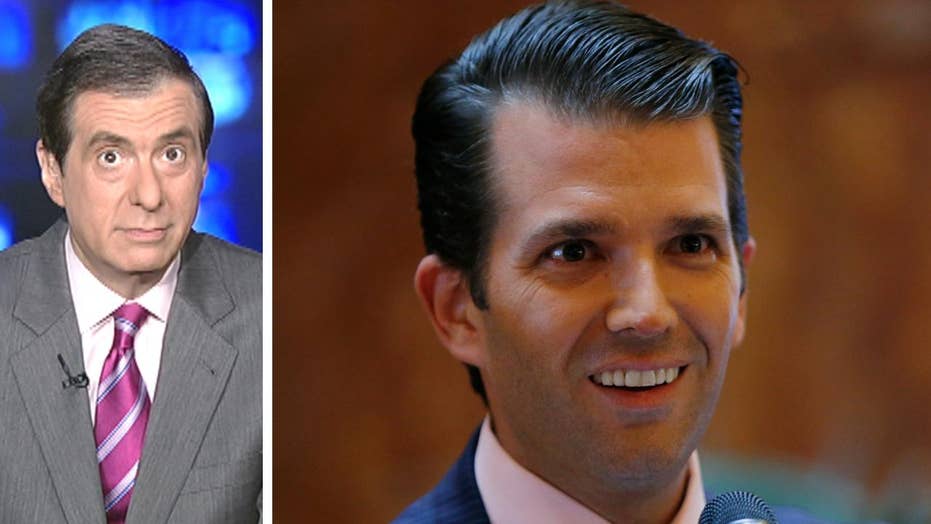 'MediaBuzz' host Howard Kurtz weighs in on the apparent 'transparency' shown by Donald Trump Jr. in releasing emails that led to his meeting with a Russian lawyer

Donald Trump Jr. said he was being “fully transparent” yesterday by releasing the emails that led to his meeting with a Russian lawyer that has caused a media uproar.

It was not a pretty picture, and it confirmed the latest New York Times story on the controversy.

The move temporarily put Don Jr. back in control of the narrative rather than playing catchup after each newspaper story. The president applauded his “transparency” in a terse statement. But that transparency wasn’t entirely voluntary: the Times says he posted the emails after being told that the paper was about to publish them.

The 2016 meeting with Natalia Veselnitskaya, which apparently led nowhere, may indeed turn out to be a blip. But Trump supporters who are denouncing it as fake news are missing the point. Most of what we now know about the matter—now including the emails--comes from the president’s son.

And while there’s plenty of room to debate whether this is a “nothing-burger,” as Reince Preibus put it, some on the right would be screaming if Chelsea Clinton had had taken such a meeting with a Russian lawyer supposedly offering dirt on Trump. Politics is built on selective outrage.

I get the Russia fatigue after months of coverage with little payoff, but Don Jr., who has since hired a criminal lawyer, is obviously taking it seriously. That’s why he appeared with Sean Hannity last night.

That email was from Rob Goldstone, a British PR guy and ex-tabloid reporter who does business with Russia and helped broker the meeting (adding to the colorful characters in this saga).

Goldstone said “the Crown prosecutor of Russia” had met with a Russian real estate magnate who was the father of one of his clients, pop star Emil Agalarov. The email said the prosecutor “offered to provide the Trump campaign with some official documents and information that would incriminate Hillary and her dealings with Russia and would be very useful to your father.”

Goldstone added: “This is obviously very high level and sensitive information but is part of Russia and its government’s support for Mr. Trump.”

That’s critical because Trump Jr. was explicitly told that the Putin government was behind this.

His quick reply is making headlines everywhere: “If it’s what you say I love it especially later in the summer.”

Goldstone later said the meeting would be with a “Russian government attorney,” which Veselnitskaya is not, but she is close to Russia’s prosecutor general, according to the Times.

Veselnitskaya told NBC News she doesn’t know why Trump Jr. believed she was bringing oppo research on Hillary: “It’s quite possible that maybe they were looking for such information. They wanted it so badly.”

Before posting the emails, Don Jr. tweeted this, in a tone reminiscent of his father: “Media & Dems are extremely invested in the Russia story. If this nonsense meeting is all they have after a yr, I understand the desperation!”

So what are we to make of this—and the partisan reaction on both sides?

National Review’s Jonah Goldberg finds “the whole feeding frenzy [over Russia] unappealing. The Democrats are clearly in full partisan mode, framing every inconvenient, benign, or even potentially exculpatory detail as a smoking gun.”

At the same time, he says, “what I just don’t understand is how conservatives can mock, scoff at, and ridicule the idea there might be some legs to this story when Donald Trump does everything he can to make it look like there might be a there there.”

The Weekly Standard ties the controversy to the Senate’s 98-2 vote turning U.S. sanctions against Moscow into law:

“Whether the media has unfairly targeted the president and his advisers over their dealings with Russian officials is now beside the point. By a series of unforced errors—omissions of financial dealings with Russian companies, unaccountably faulty memories on meetings with Kremlin-connected operatives—the Trump team has lost all credibility on the question of Russia.”

My own take is that two things are not mutually exclusive. The coverage of the Russian “collusion” question has generally been overheated, and this particular meeting, touted as providing information from the Russian government, is important. Just how important depends on whether prosecutors and the press find that it fits into a larger pattern.