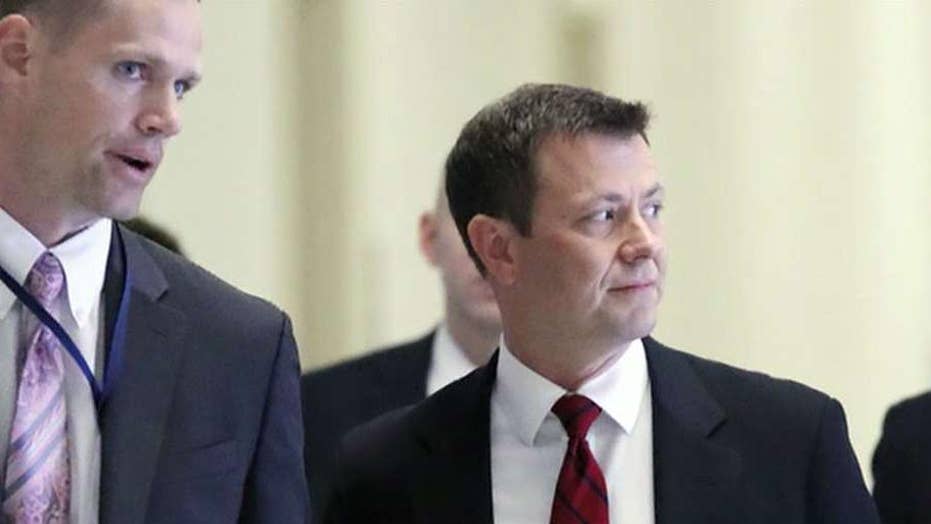 Former FBI agent Peter Strzok, who is suing the government in a bid for reinstatement, argued in a court filing in Washington, D.C., federal district court on Monday that his politically charged anti-Trump messages were protected by the First Amendment -- even though he sent them on bureau-issued phones while playing leading roles in the probes into both Hillary Clinton and Donald Trump.

"Firing an employee for the content of his or her non-public communications is unconstitutional, irrespective of any balancing of interests" including damage to the FBI's reputation and other factors, Strzok argued in his response brief, which also slammed Trump's "unpresidential tweets."

Because it was the DOJ that had leaked his anti-Trump text messages, Strzok argued, his texts should be considered private speech, and he should not be held to the tougher legal standard under the 1968 Supreme Court case Pickering v. Board of Education that applies to public statements by government employees.

Strzok, once the FBI's head of counterintelligence, said he was entitled to "develop a full factual record through discovery," and that it would be premature to dismiss the case at this early stage. He went on to argue that the DOJ's position would "leave thousands of career federal government employees without protections from discipline over the content of their political speech."

Strzok's filing was a response to the Justice Department's no-holds-barred motion to dismiss his lawsuit for reinstatement in November. The DOJ told the court that Strzok had even admitted to conducting FBI business on his personal iMessage account and assured them that the materials were secure -- even though his wife accessed his phone and determined he was having an affair with Lisa Page, then an FBI lawyer also involved in the Clinton and Russia probes.

In its filing, the DOJ included an August 2018 letter to Strzok from the DOJ's Office of Professional Responsibility (OPR), which said in part that Strzok had engaged in a "dereliction of supervisory responsibility" by failing to investigate the potentially classified Clinton emails that had turned up on an unsecured laptop belonging to Anthony Weiner as the 2016 election approached.

The case agent flagged to New York prosecutors that potentially classified Clinton emails had been found on Anthony Weiner's unsecured laptop after the investigation was publicly closed, and that senior FBI officials didn't seem interested in returning his calls on the subject.

The New York prosecutors then immediately relayed their concerns to the DOJ, effectively going over Strzok's head — and leading, eventually, to then FBI Director James Comey's fateful announcement just prior to Election Day that emails possibly related to the Clinton probe had been located on Weiner's laptop.

Additionally, DOJ and OPR noted that although Strzok claimed to have "double deleted" sensitive FBI materials from his personal devices, his wife had found photographs and a hotel reservation "ostensibly" used for a "romantic encounter." Strzok didn't consent to turning over the devices for review, according to OPR, even as he acknowledged using Apple's iMessage service for some FBI work.

"[My wife] has my phone. Read an angry note I wrote but didn't send you. That is her calling from my phone. She says she wants to talk to [you]. Said we were close friends nothing more," one of Strzok's text to Page read, according to the filing.

Strzok, a veteran counterintelligence agent, was removed from Special Counsel Robert Mueller’s team after his anti-Trump texts with Page came to light. He was fired from the FBI last August.

“One more thing: She might be our next president,” Page wrote to Strzok on Feb. 24, 2016 ahead of the FBI's interview with Clinton. “The last thing you need us going in there loaded for bear. You think she’s going to remember or care that it was more [DOJ] than [FBI]?”

Strzok also told Page that "It's clear he's [Trump's] capturing all the white, poor voters who the mainstream Republicans abandoned in all but name in the quest for the almighty $$$$."

"Congrats on a woman nominated for President in a major party! About damn time!" he wrote.

Page, meanwhile, is also suing the FBI and DOJ, alleging that the government's publication of her salacious text messages with Strzok constituted a breach of the Federal Privacy Act.

In the complaint filed earlier this month, the 39-year-old Page said she suffered numerous damages because of the disclosure, including a "permanent loss of earning capacity due to reputational damage" and "the cost of therapy to cope with unwanted national media exposure and harassment" at the hands of Trump.

DOJ Inspector General Michael Horowitz has faulted senior FBI officials, including Strzok and Page, saying their communications created the appearance of impropriety and tainted the FBI's reputation, even though he could not conclude that bias had specifically motivated investigative decisions.

Horowitz found a slew of misconduct throughout the Russia probes, including the falsification of a document by an FBI lawyer to obtain a surveillance warrant to surveil former Trump aide Carter Page.

U.S. Attorney John Durham, who is conducting his own criminal probe into FBI and DOJ misconduct, has said he disagrees with Horowitz's assessment that the FBI's opening of a probe into the Trump campaign was properly predicated.

HOROWITZ SPOTLIGHTS PIENTKA, WITHOUT NAMING THE LITTLE-KNOWN FBI AGENT NOW AT THE CENTER OF THE FLYNN, PAGE CASES

“Based on the evidence collected to date, and while our investigation is ongoing, last month we advised the Inspector General that we do not agree with some of the report’s conclusions as to predication and how the FBI case was opened,” Durham said this month.