Rep. Steve King, R-Iowa, is facing backlash after he joked about forcing Muslims imprisoned in China to eat pork during a town hall event on Tuesday.

The Sioux City Journal reported that King was explaining China's crackdown on Muslims and how a "million of them" have been detained in concentration camps where he said the women are sterilized so that they can't have any children. He went on to mention how China had also been forcing them to "wear Chinese clothes" and "eat Chinese diet," which he reportedly added, "includes trying to force the Muslims to eat pork."

"That’s actually the only part of that that I agree with. Everybody ought to eat pork. if you have a shortage of bacon, you can’t be happy," King chuckled.

An estimated 1 million Uighurs have since been detained in internment camps and prisons across the region, and advocacy groups say that includes more than 400 prominent academics, writers, performers and artists. Critics say the government is targeting intellectuals as a way to dilute, or even erase, the Uighur culture, language and identity.

King has already gotten blowback from The Council on American-Islamic Relations (CAIR), demanding GOP lawmakers to condemn the Iowa representative. 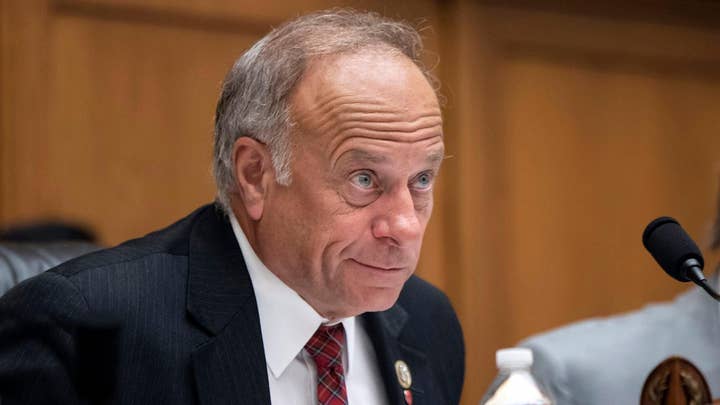 "Republican leaders need to make clear, once and for all, that Islamophobia will not be tolerated in their ranks,” CAIR said in a statement to the Sioux City Journal. “If King had joked about any other religious minority in concentration camps suffering the same humiliation he would have been kicked out of the Republican Party.”

This isn't the first time King's remarks sparked controversy. Earlier this month, the congressman pondered whether everyone's "family trees" included ancestors who were the product of rape or incest while attempting to defend his pro-life stance that excludes any exceptions for abortions.

"What if we went back through all the family trees and just pulled out anyone who was a product of rape or incest? Would there be any population of the world left if we did that?" King said. "Considering all the wars and all the rapes and pillages that happened throughout all these different nations, I know that I can't say that I was not a part of a product of that."

Several GOP lawmakers condemned their colleague following those remarks, including Rep. Liz Cheney, who called on him to resign.

King was formally condemned in the House of Representatives back in January for asking why terms like "white nationalist" and "white supremacist" had become offensive. He was also stripped from all committee assignments.