New Fox News Polls show races coming down to the wire in Arizona, Missouri and Indiana.

With the midterm election just days away, the tightness of “toss-up” Senate races is creating an element of uncertainty over the GOP’s hold of the chamber -- raising the possibility that Democrats could still gain control on Tuesday if key races go their way.

Unlike the House, where Democrats are expected to make gains and even take the gavel, the Senate battlegrounds are more favorable to Republicans and the GOP is widely predicted to hold their slim majority -- or even expand it.

The Fox News Power Rankings puts 50 Senate seats in the Republican column (including those likely or leaning Republican, and GOP seats not up for election this year), and 45 in the Democratic column. Five races are marked as "toss-ups." But the sheer closeness of five “toss-up” races indicates that Democrats do have a small chance of taking the Senate, even if the safe bet is on Republicans holding the chamber.

In Nevada, where Sen. Dean Heller is facing off against Democratic challenger Jacky Rosen, the RealClearPolitics average of recent polls gives Heller a lead of just 1 point,

In Arizona, the RCP average has Democrat Kyrsten Sinema leading Republican Martha McSally by 0.7 percent. A recent Fox News poll had the race as a tie, although other polls fluctuated wildly, with one giving Sinema a 6 point lead and another showing McSally with a 7 point lead. 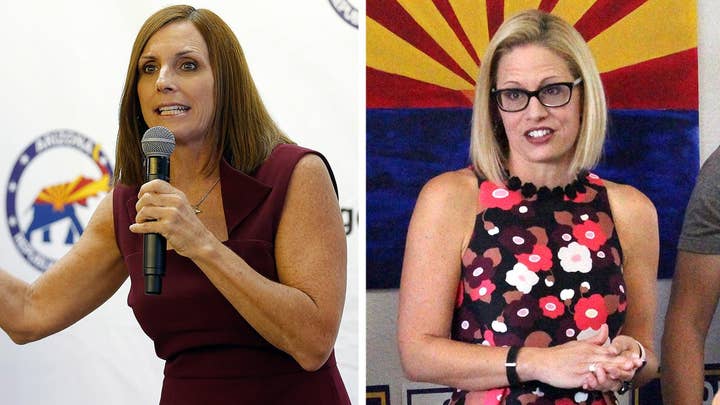 In Missouri, Republican Josh Hawley has an average of a 2-point lead over Sen. Claire McCaskill. A Fox News poll this week also had the race at a tie.

In Indiana, Democratic Sen. Joe Donnelly has an average of a 0.8 percent lead over Mike Braun, although the recent Fox News poll had Donnelly leading by seven points.

In Florida, polls show Democratic Sen. Bill Nelson consistently leading over Republican Rick Scott, but only by around two points.

If Democrats are to take the Senate, they will need all five of those races -- which are all within the margin of error -- to go their way. In addition to that, they would need to pick up a big scalp from one of the races that aren’t as close.

STATE OF THE MIDTERMS: CRUZ FEELS HEAT FROM BETO IN NEW POLL, AS BLACKBURN PULLS AWAY

Democrats are hoping in particular that that pick-up will come in Texas, where Democrats have been pouring money into the race to get Beto O’Rourke over the line in his race against Republican Sen. Ted Cruz. The RealClearPolitics average has Cruz ahead by an average of 6.5 points, with one poll last week showing Cruz ahead by 10. However, an Emerson poll showed Cruz ahead by just three, suggesting the race could still be in reach for O’Rourke.

Democrats may also have eyed Tennessee as a possible pickup, where Phil Bredesen was once running close to Republican Marsha Blackburn. But in recent days, that seems to be slipping away from Democrats. The Emerson poll this week shows Blackburn ahead by 8 points, while a Fox News poll shows her ahead by 9.

There could also be an opportunity for Democrats in Mississippi. There Republican Cindy Hyde-Smith is leading the race in a three-way split, but is not expected to get to 50 percent -- which, because of state rules, would trigger a run-off. Should that happen, the run-off would likely be the focus of national attention and both sides pouring significant resources into the race -- potentially shaking up the race in the red state.

On the House side, the Real Clear Politics map shows 203 House seats tilting Democratic, and 196 tilting toward Republicans, with 36 in the “toss-up” column. Fox News’ Power Rankings similarly puts the split at 207 seats for Democrats and 199 for Republicans, and the rest up in the air. It takes 218 seats to claim a majority.