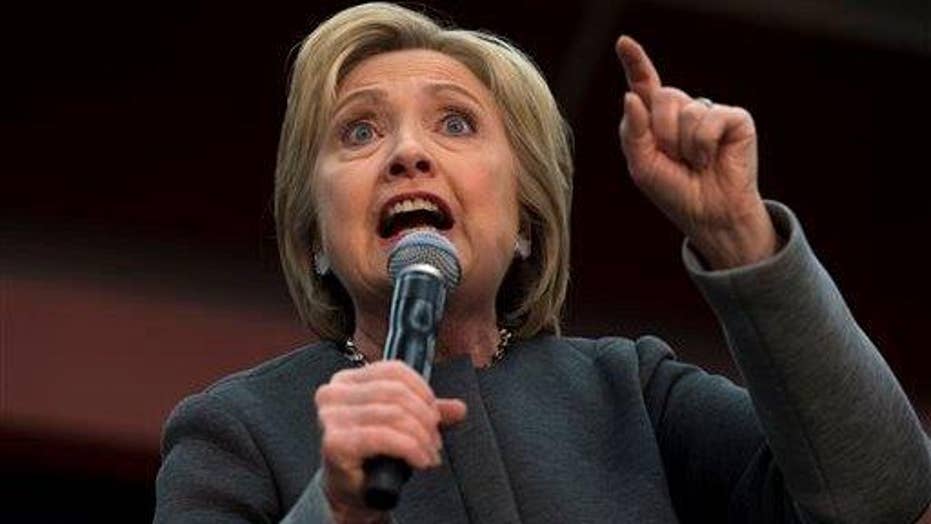 On the eve of Super Tuesday, the State Department released the final installment of former Secretary of State Hillary Clinton's emails from her private server, bringing the total to more than 2,000 emails containing classified information.

The 261 new classified emails are among the approximately 1,700 emails in 3,800 pages released by State Department in the 14th, and final, Clinton email release.

Monday’s release brings the total number of classified Clinton emails to 2,080 among the more than 52,000 pages of emails she turned in to the State Department last year.

In releasing the final batch of 3,800 documents, the department also settled a long-running dispute over one sensitive email as intelligence agencies dropped a months-long demand an exchange on North Korea's nuclear program be designated "top secret," the highest level of classification.

"Based on subsequent review, the intelligence community revisited its earlier assessment," State Department spokesman John Kirby told reporters. He added: "The original assessment was not correct and the document does not contain top secret information."

The announcement came a day before Clinton competes in 11 Democratic primary contests. She is the front-runner to win the Democratic presidential nomination.

The department faced a Monday deadline set by a federal judge to release the final documents from the private server Clinton exclusively used while in government. Clinton aides went through her emails and turned over the ones they determined to be work-related.

The North Korea email is one of two that Charles I. McCullough, lead auditor for U.S. intelligence agencies, identified last year as particularly problematic. The other concerned the CIA's drone program and led to officials classifying 22 emails from Clinton's private account last month as "top secret." They were withheld from publication.

The State Department claims that no emails Clinton wrote or received were marked as classified at the time of transmission, which Clinton has repeatedly cited in her own defense.

Intelligence officials however tell Fox News this is a dubious claim, and that all the emails were born classified.

As with earlier releases, Monday's contained emails with information that has been upgraded to "secret" and "confidential." 261 were so identified, bring the total of such upgrades to more than 2,050 for the entire set. No material in Monday's release contained documents with information now deemed "top secret."

However, the current batch did include one message with an attachment that purported to be a classified note that Tom Donilon, Obama's national security adviser, slipped into Jerusalem's Wailing Wall on a trip to Israel in 2012.

However, officials said the attachment along with its contents were, in fact, a joke sent to Clinton by an aide.

The attachment is addressed to "Hashem," a Hebrew word for God, and includes inside jokes poking fun at then-U.N. Ambassador Susan Rice and Clinton's top Asia aide, Kurt Campbell. It bears a "TOP SECRET" stamp.

"This document, and the email chain to which it was attached, are unclassified," a State Department official said. "This document is not a real note. It is a joke written by Secretary Clinton's communications adviser, Philippe Reines, and was attached to an email chain discussing senior officials' travel to Israel in July 2012." The official wasn't authorized to speak publicly on the matter and demanded anonymity.

On the North Korea document, Kirby stressed that the exchange had only been "provisionally" upgraded in classification, suggesting the department doesn't even fully accept the lesser finding.

"The information available to diplomats and the judgments they form do not necessarily need to be classified just because there are parallel intelligence sources," Kirby said.

In addition to portions of that document being censored, one email between Clinton and President Barack Obama was also withheld from publication on Monday, bringing to 19 the total of such messages that have been kept private to protect the president's ability to receive advice from his aides.

Those emails are not classified and will be released eventually like other presidential records.

Another email on an unidentified law enforcement matter was also withheld from Monday's release, which was done in accordance with Freedom of Information Act standards. Kirby said that one also is unclassified.

In another exchange at the end of 2009, Clinton received some early advice from her confidant Sidney Blumenthal on how to take a "different approach" from President Obama in dealing with the aftermath of the attempted bombing of a Delta Airlines flight in Detroit.

Blumenthal encouraged Clinton to channel her inner John F. Kennedy following the aftermath of the botched Bay of Pigs invasion of Cuba, saying that JFK took personal responsibility for the failure and encouraged her to do the same.

"Don't blame anyone in public!” he encouraged  Clinton.

He added that said President Obama's refusal to take responsibility for the underwear bomber was a "failure."

Years later, critics faulted Hillary Clinton for not taking personal responsibility immediately following the terrorist attack on her consulate in Libya, killing the ambassador and three other Americans.

The White House refused to let Clinton hire Blumenthal to join her team officially.  Instead, he relayed advice to her on the private server.

In another email, Sid told Clinton the "very clever" Denis McDonough then working in the National Security Council was "inadvertently" setting up the president "for a fall."

He also accused New York Times columnist Maureen Dowd of a drive by shooting, which he called a drive-by "machine gunning."