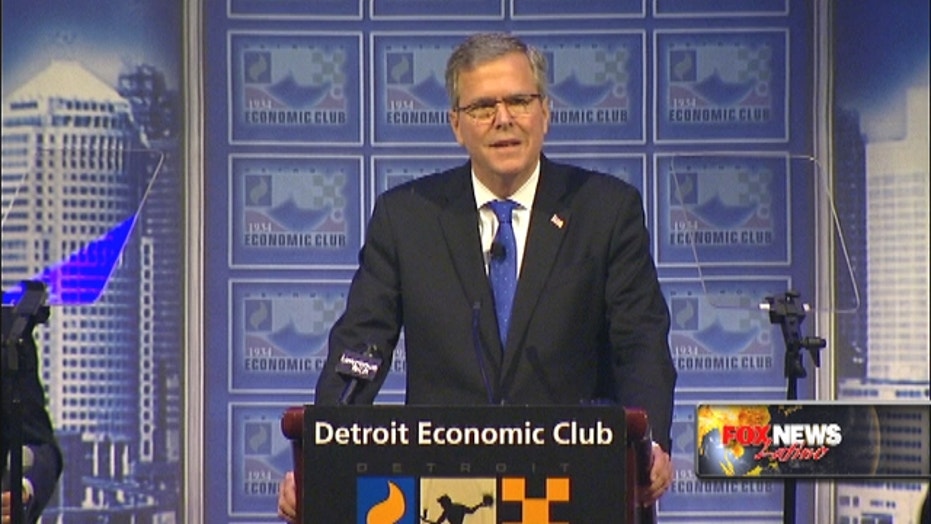 DETROIT (AP) – In Republican presidential prospect Jeb Bush's first major economic speech, the former Florida governor said the U.S. economy should be growing at 4 percent annually — and called making it easier for skilled immigrants to enter the country a key to getting there.

In a speech to the Detroit Economic Club, Bush offered an economic vision with few specifics, saying he favored promoting two-parent families and closing the income gap by overhauling the nation's school systems to give parents more choice.

We can grow by 4 percent through all sorts of policies, but immigration has to be a part of it.

But he also called for "dramatically expanding" the number of immigrants allowed to enter the country to work in high-need jobs, while calling the prospect of overhauling the country's immigration system "a huge opportunity ... not a problem."

"While the political fights go on, we're missing this opportunity. I view fixing a broken system as a huge opportunity to get to that four percent growth," Bush told about 600 Detroit-area business leaders. "We can grow by 4 percent through all sorts of policies, but immigration has to be a part of it."

Economists expect the U.S. economy to expand 3 percent this year, above the 2.2 percent annual average during the recovery from the Great Recession.

Bush, who has spent the past several weeks aggressively raising money in private ahead of a likely run for president, has long supported a comprehensive overhaul of the nation's immigration system. In a speech last month to auto dealers in San Francisco, he called immigrants "an engine of economic vitality."

The nation's surging Hispanic population shifted sharply away from the Republican Party in the last presidential election after the party's 2012 nominee, Mitt Romney, alienated many Hispanic voters by offering "self-deportation" as a solution to the nation's immigration problem. GOP operatives insist that the party's tone on immigration must change if it hopes to reclaim the White House in 2016.

Bush's comments Wednesday addressed the desire of some industries, especially technology, to allow more immigrants with specific skills to come to the United States legally. They did not refer directly to the roughly 11 million people living in the U.S. illegally, the source of most of the political tension over immigration.

Bush has previously said he supports allowing people in the country illegally to stay, but only after taking a series of steps, such as paying unpaid taxes. The position puts him at odds with some of the Republican Party's most passionate voters, a group likely to hold great sway in the primaries, who aggressively opposes any pathway to legal status — something they call "amnesty."

Bush's position on immigration is not unique, however, as Republican White House prospects such as Florida Sen. Marco Rubio and Wisconsin Gov. Scott Walker have also previously supported a similar position.

Like many other Republicans, Bush cites border security as a crucial component of any immigration overhaul and told the auto dealers the U.S. should "politely ask" those who came to the country legally but have since overstayed their visa to leave.

But Bush also supported the immigration overhaul that passed the Senate last year before failing to advance through the House. He said Wednesday that shifting the debate "to an economic issue from a political issue will be helpful."

Of skilled guest workers, investors and inventors seeking to immigrate legally to the U.S., he said, "All these people should be welcomed in our country, and the unwritten contract ought to be: Embrace our values and you can pursue your dreams."

At the same time, Bush argued, such an expansion would require leaders to show greater acceptance of the racial and ethnic diversity such a change would bring to the country.

"You come, you work hard, you embrace these values, and you're as American as anyone who came on the Mayflower," he said.

The line prompted one of the few moments of applause during Bush's 45 minute appearance, which included his speech and moderated questions from the audience.

"He knocked it out of the park," said Ronna Romney, former sister-in-law to the 2012 GOP nominee and a Republican National Committeewoman from Michigan. "I thought he did really well during the Q and A."

The speech marked the beginning of a more public chapter to Bush's consideration of the 2016 race, though he took no questions from the media covering the event and was headed to a private fundraiser Wednesday evening.

Aides said Wednesday Bush he will make his first trip to Iowa as a presidential prospect next month, taking part in an agricultural policy forum hosted by Republican Gov. Terry Branstad and agribusiness leader Bruce Rastetter.