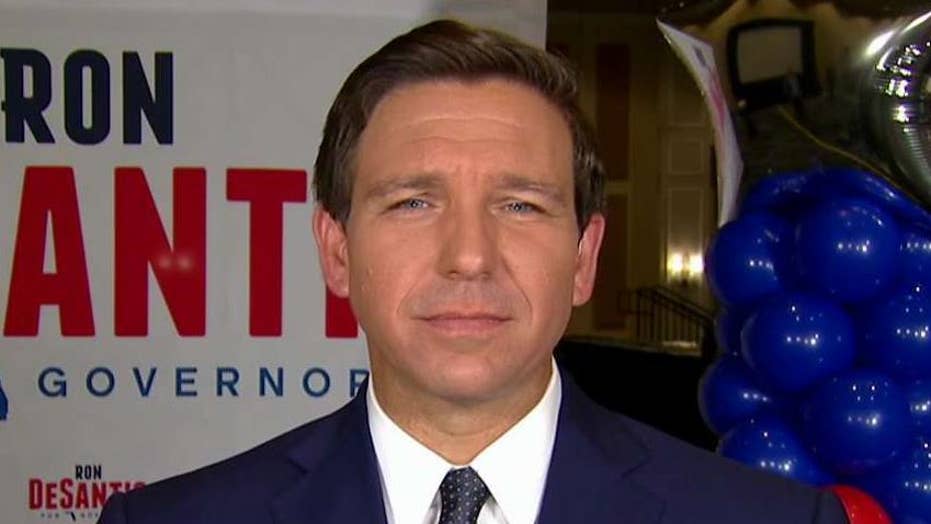 DeSantis, who was backed by President Trump, appeared on the “Ingraham Angle” following his win, and denounced his competitor, Tallahassee Mayor Andrew Gillum, as “the most liberal candidate that the Democratic Party has ever nominated in the state of Florida by a country mile in a governor’s race.”

Gillum’s unexpected win was seen as a huge win for the newly emerging progressive wing of the Democratic Party, and Tuesday's outcome immediately transformed the nation’s largest swing state into one of the key gubernatorial campaigns in the country.

The mayor received an endorsement from Sen. Bernie Sanders, I-Vt., and was congratulated by newcomer Alexandria Ocasio-Cortez. The Miami Herald reported that he also benefited from “a financial boost from billionaires Tom Steyer and George Soros.”

DeSantis will test Trump’s grip on a crucial state he won in 2016.

“(Gillum) wants to abolish ICE; he wants a billion-dollar tax increase; he wants a single-payer health care system in Florida, which would bankrupt the state. I’m trying to make Florida even better. He wants to make Florida Venezuela,” DeSantis said, adding that Gillum’s tenure as mayor has been “absolutely disastrous.”

The Herald reported that DeSantis is a member of the Freedom Caucus, which wants a border wall.

During the campaign, Gillum often said he was the only candidate that wasn’t a millionaire or billionaire, and spent the least of his Democratic rivals.

After winning the Democratic nomination, Gillum thanked supporters who embraced “our plan for a state that makes room for all of us, not just the well-heeled and the well-connected, but all of us.”

Blaise Ingoglia, the chairman of the Republican Party of Florida, told The Herald that he welcomes the challenge, saying, “progressive-slash-socialist candidates just don’t perform well in general elections.”