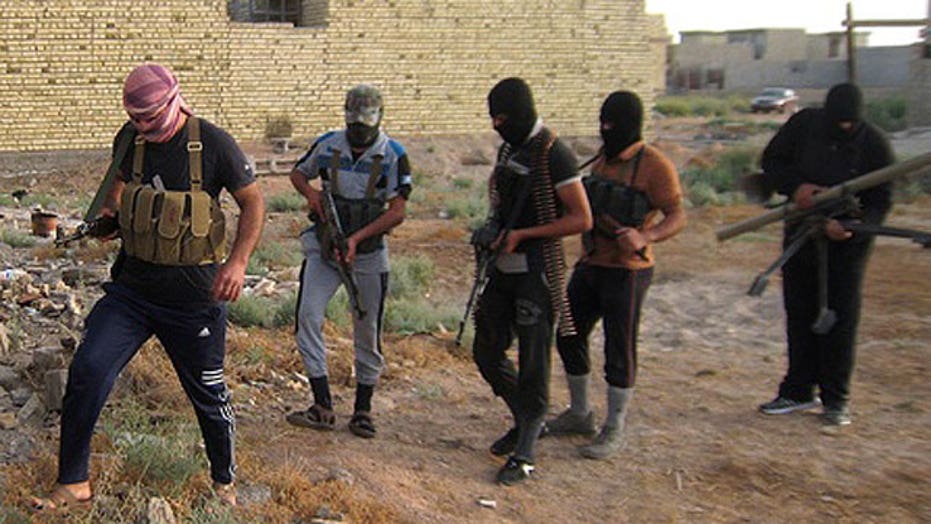 As President Obama and U.S. allies weigh the next steps in the fight against the Islamic State, lawmakers and military analysts say the strategy for uprooting the terror network must involve striking at its headquarters in Raqqa, Syria – using airstrikes as well as allies on the ground.

“You must hit the enemy at the source and that is Raqqa,” Rep. Adam Kinzinger, R-Ill., told Fox News.

Obama administration officials, at the close of a NATO summit on Friday, held a meeting on the Islamic State with allies including Britain, France, Germany and Canada.

So far, Obama has not committed to expanding airstrikes into Syria. In a joint statement Friday from the NATO summit, Secretary of State John Kerry and Defense Secretary Chuck Hagel only briefly addressed the issue, saying: “We will form a multinational task force to share more information about the flow of foreign fighters into Syria and from Syria into Iraq."

But even Democratic lawmakers are starting to take a more hawkish view of the matter.

Col. Derek Harvey, a former senior adviser to Gen. David Petraeus in Iraq, likewise said the key to defeating the Islamic State, or ISIS, requires “severing the link among Raqqa, Mosul and Tikrit,” areas the group has taken over in recent months that have become ISIS power centers. “You must cut off their communication and supply lines. This will put great stress on ISIS,” he said.

Harvey agreed with Kinzinger that strikes inside eastern Syria at the Islamic State’s base in Raqqa would hurt ISIS and said airstrikes would meet minimal resistance. "The SA-6s and SA-4s [surface-to-air missile launchers] are located in the west in Damascus, Latakia, Aleppo, and we would not be flying in those areas. You don’t need permission to fly into Syria," Harvey said. He also said that U.S. special operations forces could embed with Sunni tribes in the Euphrates River basin, tribes that are currently fighting both the Assad regime and ISIS.

Harvey said by working with moderate Sunni tribes, Christians and Kurdish Syrians in the northeast, a powerful alliance to defeat the Islamic State in Syria has the potential to develop. Obama addressed the potential of working with these groups at his NATO press conference in Wales on Friday, saying: “We are going to have to find effective partners on the ground [in Syria].”

Some see northeast Syria as a critical component of any comprehensive strategy to rout the Islamic State.

Walid Phares, a Fox News Middle East and terrorism analyst, said northeast Syria, home to Christians and Kurdish Syrians, would be an ideal place to form a "safe zone," a place to base any clandestine operations inside Syria. "You have 2-3 million Syrian Kurds and 600,000 Christians that can be very helpful in battling ISIS there,” he said. “We need to work to form a unified front with the Syrian Kurds and Christians and connect them with the seculars within the Sunni community."

Phares also said former Assad regime officers that make up the Free Syrian Army (FSA) could be involved in attacking ISIS. "They need to be vetted again, but could constitute a good core,” he said.

A Kurdish representative to the United States says a staging area within northeast Syria could be the city of Qamishli, located along the Syrian-Turkish border, home to ethnic Syrian Kurds, Christians and moderate Sunni Arabs. The city also contains an international airport, useful to bring in supplies. “If the U.S. needs a staging area inside Syria, this could potentially be an ideal location because the people there are sympathetic to the West and not ISIS,” said Kurdish director of U.S. congressional affairs Karwan Zebari.

In Iraq, a source close to the Kurdish peshmerga fighters thinks a two-pronged approach of attacking ISIS in Iraq and Syria could be successful, but said more military aid is necessary -- and Irbil in northern Iraq would be an ideal staging ground. "We have the third longest runway in the Middle East," he pointed out.

“The peshmerga would like to see U.S. special forces embedded on the front lines to attack ISIS more effectively,” the source close to the peshmerga told Fox News. “They don’t have to fire a shot, but they do need to be outside the base to help us.”

“How do you provide intelligence inside the base? How do you provide real training? Special Forces need to be on the front lines to make that happen.”  he added. “We need trained snipers to take out ISIS from a mile away. We don’t have sniper rifles or the capability to use them efficiently.”

While an overt presence is welcomed in Iraq, that should not be the case in Syria, according to Harvey.

He advised that any mission in Syria needs to be done in secret. "[The U.S.] does not need to put anything there except in a clandestine way, you don't want it characterized as a U.S. mission," he said. The goal, said Harvey, is to "provide support and have deniability" at the same time.

In a New York Times op-ed last week, Kerry hinted that not all support in the fight against ISIS would be overt. "In this battle there is a role for almost every country. Some will provide military assistance, direct and indirect," he wrote.

The president admitted Friday a coalition to “defeat” ISIS will not come together soon.

“It is not going to happen overnight, but we are steadily moving in the right direction,” Obama said. To aid this effort, the president is sending Kerry to the Middle East after meeting with his NATO counterparts. Hagel will travel to Turkey.

When Pentagon spokesman Rear Adm. John Kirby was asked by Fox News if other nations had pledged their support to the U.S. to conduct airstrikes in Syria, Kirby could not name any. "I am not aware of any such pledge," said Kirby last week.

The urgency to cripple ISIS has been echoed by congressional Democrats, including Sen. Elizabeth Warren, D-Mass. “We need to be working now, full-speed ahead, with other countries, to destroy ISIS. That should be our No. 1 priority," Warren said Wednesday in an interview with Yahoo’s Katie Couric.