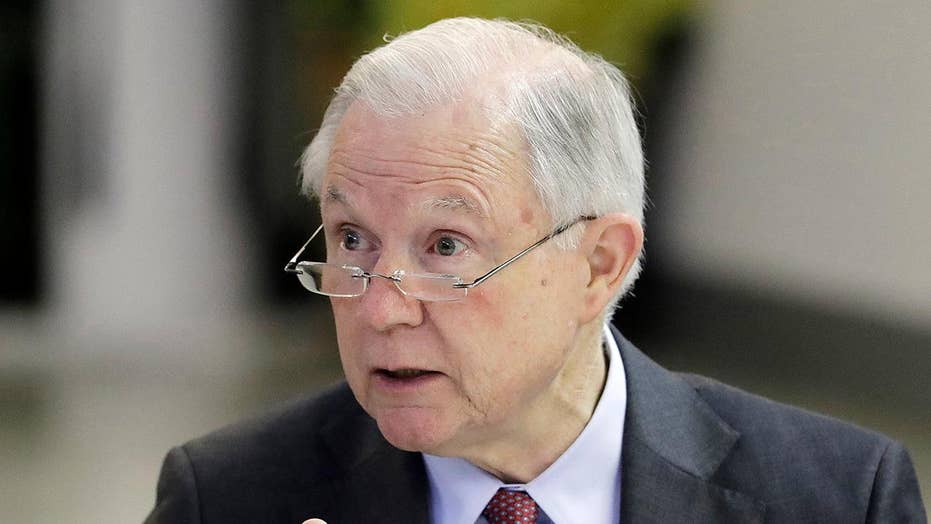 Attorney General Jeff Sessions could face heat from both sides of the aisle Tuesday, in a widely anticipated appearance before House lawmakers that comes just hours after he revealed that he has ordered top prosecutors to look into "certain issues" involving the Clinton Foundation and the controversial sale of American uranium interests to Russia.

Sessions is expected to testify before the House Judiciary Committee Tuesday morning, and will face tough questioning from Republicans, who believe he took too long, and Democrats, who consider the potential probes partisan.

The appearance comes after Fox News first reported Monday evening that the Justice Department informed committee Chairman Bob Goodlatte, R-Va., and other members the issues were on the Department of Justice's radar. Committee members had pressed Sessions to appoint a special counsel to look into alleged wrongdoing by the Clinton Foundation and the possibly related sale of Uranium One to a Russian company.

Republicans on the committee are also expected to press Sessions on perceived politicization of the FBI during the probe into Hillary Clinton’s private email server. Clinton was eventually cleared by former FBI Director James Comey, but new information has raised questions about Comey's decision-making process.

It is unclear what Sessions can directly do regarding appointment of a special counsel. At his confirmation hearing before the Senate Judiciary Committee in January, the former senator seemingly recused himself from any investigations involving Clinton.

“I believe the proper thing for me to do, would be to recuse myself from any questions involving those kinds of investigations that involve Secretary Clinton and that were raised during the campaign or to be otherwise connected to it,” Sessions said.

The Justice Department did not confirm the breadth of Sessions’ recusal to Fox News, as that would confirm the existence of an investigation, but referred queries to Sessions' confirmation hearing statement.

In the letter to Goodlatte and other committee members –including Reps. Ron DeSantis, R-Fla., Matt Gaetz, R-Fla., Louis Gohmert, R-Texas, and Jim Jordan, R-Ohio, the Justice Department said the prosecutors would report to Sessions and his deputy, Rod Rosenstein.

Lawmakers, in both the House and the Senate, have questioned whether Sessions must step aside, and whether Rosenstein should  be recused from an investigation involving Uranium One. Rosenstein, as a U.S. Attorney, reportedly helped supervise a bribery probe into a subsidiary of the same Russian firm—Rosatom—involved in the Uranium One deal.

The deal concerns the 2010 approval of the sale of Canadian mining company Uranium One to Russia’s Rosatom nuclear company. The U.S. was involved because the sale gave the Russians control of part of the uranium supply in the U.S.

The Hill reported, however, that the FBI had evidence as early as 2009 that Russian operatives used bribes, kickbacks and other dirty tactics to expand Moscow’s atomic energy footprint in the U.S., related to a subsidiary of the same Russian firm. Principals involved in the deal also reportedly made massive donations to the Clinton Foundation around the time of the deal.

Rosenstein has signaled he does not need to recuse himself from a probe involving Uranium One.

“The U.S. Attorney’s Office played no role in the 2010 approval of the transfer of rights to mine American uranium involving a different Russian subsidiary,” Rosenstein wrote to Grassley and Feinstein, also noting that “this case” was the first issue questioned during his confirmation hearing.

Still, many on the Republican side do not believe Rosenstein can lead an objective probe into the Uranium One deal.

“We certainly cannot leave it to Mr. Rosenstein,” Gaetz said on “The Ingraham Angle” Monday. “It’s Rosenstein’s name on the signature block sealing from Congress and the American people the very testimony of the informant ready to tell us about the bribes and the kickbacks.”

GRASSLEY CALLS FOR SPECIAL COUNSEL TO INVESTIGATE URANIUM ONE

If Sessions and Rosenstein did, in fact, need to recuse themselves from any investigation, Rep. Jim Jordan said “we don’t know the answer” to who would have the authority to appoint a special counsel if necessary.

On “Fox & Friends” Tuesday, following the Justice Department’s announcement, Sen. Charles Grassley, R-Iowa, seemed content with the investigation being led by the DOJ, with officials who “haven’t had any involvement in any of this.”

Sessions is also expected to answer questions Tuesday regarding Special Counsel Robert Mueller's investigation, which he recused himself from.